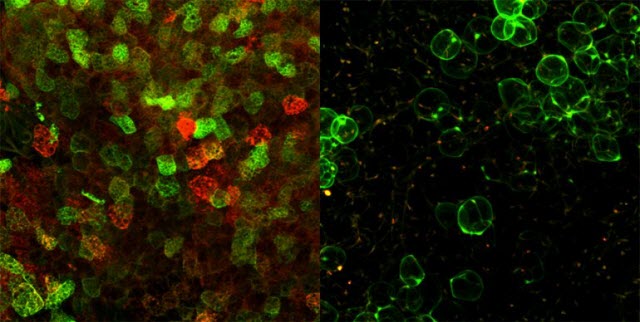 Beige fat cells have the ability to switch back and forth between an energy-hoarding “white” state and an energy-burning “brown” state, the new research found, based on how they handle the cellular power plants known as mitochondria: Preventing beige fat cells from digesting their own mitochondria traps them in the energy-burning state. In mice, this intervention successfully protected against obesity and pre-diabetic symptoms, raising hopes for future applications in human patients.

The results—which appear Aug. 25, 2016, in the journal Cell Metabolism—represent a key new advance in efforts to use beige fat to battle the growing worldwide epidemics of obesity and type 2 diabetes, according to senior investigator Shingo Kajimura, PhD, an associate professor of cell and tissue biology in UCSF’s School of Dentistry.

All mammals, including humans, have two types of fat with completely opposite functions: white, which stores energy and is linked with diabetes and obesity; and brown, which produces heat by burning energy and is associated with leanness. 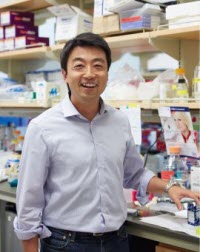 Shingo Kajimura, PhDPhoto courtesy of UC San FranciscoHuman babies are born with brown fat as a natural defense against cold, but it wasn’t until 2009 that researchers first discovered that adult humans have energy-burning fat as well. In 2015, Kajimura’s group demonstrated that most of this healthy fat in humans is not so-called classical brown fat of the type that babies are born with, but a completely different type of cell, which the researchers dubbed “beige fat.” Beige fat is found within white fat and has the ability to quickly convert from an energy-storing state to an energy-burning state in response to environmental changes, such as cold or other stressors.

Many obesity researchers hope to harness the energy-burning capacity of beige and brown fat to help patients lose weight: just two ounces of the stuff can burn up to 200 calories a day when the temperature drops. But just exposing patients to cold temperatures – or giving them drugs that trick the body into thinking it’s cold – have proven ineffective in early trials because most people who are obese lack a significant amount of active brown fat. These approaches also have dangerous cardiovascular side effects, which are of particular concern in obese patients.

Kajimura's group recently identified new pharmacological strategies for transforming white fat into beige fat in mice, which showed significant health benefits without cardiovascular side effects. However, the researchers soon realized that when these drug treatments are stopped, the new beige fat just reverts to white fat again within weeks.

“For many years our focus has been on learning to convert white fat into beige fat,” said Kajimura, who holds joint appointments in UCSF’s Diabetes Center and at the Eli and Edythe Broad Center of Regeneration Medicine and Stem Cell Research. “Now we’re realizing we also have to think about how to keep it there for longer time.”

In their new paper, a team led by Kajimura’s graduate student Svetlana Altshuler-Keylin demonstrated that when they revert to white fat, beige fat cells digest their mitochondria—a structure found inside cells that burns glucose and turns it into energy. When the research team deleted key genes to prevent beige fat cells from eating their own mitochondria in mice, they succeeded in preserving the beige fat and its health benefits.

First, the team needed to show that individual beige fat cells directly convert back to white fat—that they weren’t dying and being replaced by new white fat cells, for instance. To demonstrate this, Altshuler-Keylin embedded cells in a gel and used a microscope to track their transformation for ten days. She saw that beige fat cells quickly lost their characteristic marbled appearance, developing the single large droplet of oily lipid typical of white fat cells.

“So we knew beige fat tends to disappear, but we wanted to know why,” Altshuler-Keylin said. “We knew that the color of brown and beige fat comes from the amount of pigmented mitochondria they contain, so we wondered whether something was going on with the mitochondria when beige fat turns white.”

The researchers analyzed changes in gene expression during the beige-to-white transition. They found that, indeed, a cluster of genes related to mitochondria was highly active in beige fat, but declined sharply as beige fat turned white. Using fluorescent proteins to visualize mitochondria, the researchers confirmed that these cellular power plants increase in number during “beiging”, but decline during “whitening.”

Further gene expression analysis suggested that autophagy – a common process in which cells digest their own internal components when they are defective or unneeded – actively culls mitochondria during the beige-to-white transition. Altshuler-Keylin suspected that controlling autophagy might be the key to keeping beige cells burning energy. She obtained some mice with key autophagy genes deleted in beige fat cells, boosted beige fat levels in these mice with cold or drugs, then withdrew these stimulating factors. She found that the mice with the autophagy genes knocked out retained much more beige fat, presumably because they were unable to revert it back to white fat.

“That was the first time in my career I’ve seen such a striking result,” Altshuler-Keylin said. “I had to run around the lab and show it to everybody.”

Further tests showed that mice with autophagy blocked in their fat cells not only retained beige fat longer than normal mice, but also burned energy more quickly—without any obvious differences in activity levels or appetite. Placed on a high-fat diet for eight weeks, these mice also gained considerably less weight and retained healthier glucose metabolism and insulin sensitivity, which are signs of protection against type 2 diabetes.

Kajimura hopes the new finding will contribute to efforts to boost beige fat in people with obesity, particularly older adults. “With age you tend to naturally lose your beige fat, which we think is one of the main drivers of age-related obesity. Your calorie intake stays the same, but you’re not burning as much,” he said. “Maybe by understanding this process we can help people keep more beige fat, and therefore stay healthier.”

Additional authors on the paper were Kosaku Shinoda, PhD; Yutaka Hasegawa, MD, PhD; Kenji Ikeda, MD, PhD; Haemin Hong; Qianqian Kang; and Yangyu Yang, of the UCSF Department of Cell and Tissue Biology, UCSF Diabetes Center, and Eli and Edythe Broad Center of Regeneration Medicine and Stem Cell Research; Rushika Perera, PhD, of the UCSF departments of Anatomy and Pathology; and Jayanta Debnath, MD, of the Department of Pathology. Perera and Debnath are both members of the Helen Diller Comprehensive Cancer Center at UCSF.

Support for the research includes grants from the National Institutes of Health (DK97441, DK108822, and CA126792); the Diabetes and Endocrinology Research Center at UCSF (DK63720), funded by the National Institute of Diabetes and Digestive and Kidney Diseases; the Pew Charitable Trust; the Japan Science and Technology Agency; the American Cancer Society; the Pancreatic Cancer Action Network; the American Heart Association (15PRE23050029); the California Institute for Regenerative Medicine (TG2-01153); the Larry L. Hillblom Foundation (2014-D-025-FEL); the Manpei Suziki Diabetes Foundation; and the CSC Charitable Foundation (201506350063). The authors declare no conflicting financial interests.