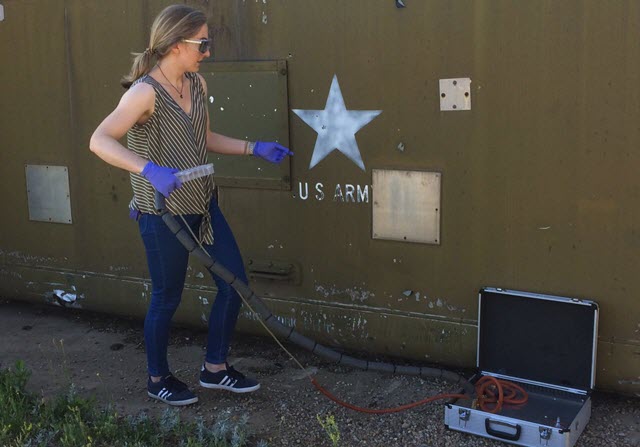 NIST chemist Megan Harries tests whether a portable, high-tech sniffing device called a PLOT-cryo system can be used to screen shipping containers for dangerous airborne chemicals at ports of entry. For this test, which was performed at the NIST campus in Boulder, CO, Harries used an old US Army communications bunker as a stand-in for a shipping container.Credit: Image courtesy of Megan Harries

So thought Megan Harries as she measured drops of putrescine and cadaverine—the chemicals that give decomposing corpses their distinctive, terrible odor—into glass vials. She then placed the vials on the floor of a shipping container, walked outside, and closed the door behind her.

Harries, a postdoctoral fellow and chemist at the National Institute of Standards and Technology (NIST), returned a day later, after the vapors diffused. Outside the shipping container, she popped open an aluminum briefcase, unfurled a flexible tube with a metal tip at the end, and inserted that into a small hole drilled into the side of the container.

Harries was conducting the first field test of a high-tech sniffing device called a PLOT-cryo—short for "porous layer open tubular cryogenic adsorption." This NIST-invented device can be used to detect very low concentrations of chemicals in the air. The results of the test were recently published in Forensic Chemistry.

Harries wanted to know if PLOT-cryo could be used at ports of entry to quickly and safely screen shipping containers for dangerous or illegal cargo. So, did the instrument detect the stench of death?

Especially on the first few days. Harries returned to the shipping container every day for a few weeks as the chemicals evaporated away. Her goal was to determine how temperature, humidity and other factors affected the PLOT-cryo's ability to detect chemicals in air.

The simulated shipping container—it was actually an old US Army communications bunker—was in the parking lot at the NIST campus in Boulder, Colorado, not far from where employees parked their cars. "People would ask me, 'What is in there,'" she said.

Harries explained that the putrescine and cadaverine—the "decomposition suite of compounds," she called them—had been purchased from a chemical supplier. She also tested gasoline, chemicals present in explosives, and other compounds. "We chose those chemical mixtures as surrogates for things that law enforcement might care about," she said.

The PLOT-cryo itself is not a chemical sensor. Instead, it's a sophisticated air sampler. It works by sucking in air and forcing it through super-thin tubes, or capillaries, that are coated with a material that traps airborne chemicals. The capillaries are also chilled (that's where the "cryo" comes in), which makes for a better trap. After sampling, the user removes the trap and brings it to the lab to analyze what they've caught.

That analysis can be done quickly on standard lab equipment because the PLOT-cryo has concentrated the airborne chemicals, making them easier to detect and identify. Without that step, the analysis would be more costly and complicated.

NIST researchers developed PLOT-cryo in 2009 and have shown that it can be used to detect clandestine graves, food spoilage, and chemicals in fire debris that might show evidence of arson.

During this first field test of a portable version of a PLOT-cryo system, Harries found that the instrument usually required less than a minute of sniffing time to pick up a scent—an important consideration for inspectors at busy ports of entry—though in cold weather it sometimes needed a bit more time. In addition, when the air was very humid, the cooling system caused ice buildup that obstructed air flow. Harries' colleagues are currently working on a different type of cooling system that they hope will solve that problem.

If it does, Harries said, the PLOT-cryo can give a boost to public health and safety. "It was good at detecting some very hard-to-detect stuff," Harries said. "We're close to solving an important problem."