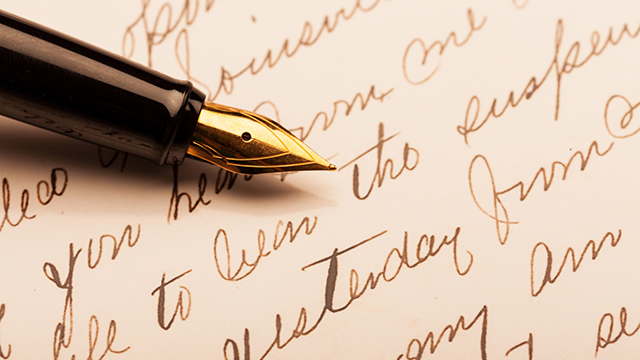 Forensic handwriting specialists are often called on to testify in court about the origins of a few lines of writing, or to determine whether a specific person has written a sentence. Scientific and forensic institutions also increasingly ask these experts to state the likelihood that a specific handwriting feature will occur in handwriting in the general public. Following a new study, researchers are now advising courts to take a cautionary approach when using experience-based likelihood ratios as evidence. The research, led by Kristy Martire of the University of New South Wales in Australia, is published in Springer's Psychonomic Bulletin & Review.

Martire and her colleagues set out to examine whether handwriting experts are better able to estimate the frequency of certain features in the handwriting of Americans than novices. To do so, they recruited 18 court-practicing handwriting specialists (eight practicing in the US), and 77 people (36 from the US) with no previous training or experience in analysing handwriting. The non-US residents were from Australia, Canada, the Netherlands, South Africa or Germany. All participants were given samples to examine from a recently collected database of handwriting features that had not yet been released into the public domain. The samples came from a database funded by the US National Institute of Justice that is now being used to statistically estimate the frequency of handwriting features in a sample representative of the US adult population.

Using this database, they were able to compare the performance of experts and novices, as well as US participants and people from other parts of the world. The researchers found that experts are marginally better than novices at estimating how often specific handwriting features occur in the writing of the general population, but they are not able to do so with complete accuracy. However, the estimations given by handwriting experts do reflect a level of knowledge and skill. Results showed that the US experts were better than their counterparts from other parts of the world at estimating the frequency of features in handwriting samples.

"The overall error rate even for experts is large enough as to raise questions about whether their estimates can be sufficiently trustworthy for presentation in courts," notes Martire. "We suggest that a cautious approach should be taken before endorsing the use of experience-based likelihood ratios for forensic purposes in the future."