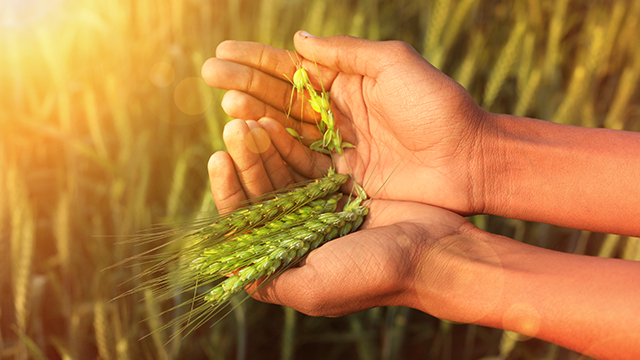 UVALDE - Looking at leaves to peer into the future might seem the stuff of superstition, but is actually the essence of research conducted by scientists from Texas A&M AgriLife and the University of Southern California.

"Our study was based on observations that the more successful crops in areas typically affected by drought are usually protected by a thicker layer of leaf wax than other plants," said Dr. Xuejun Dong, Texas A&M AgriLife Research crop physiologist and a corresponding author for the study, Uvalde. "We're hoping this research will help wheat breeders add to the arsenal of traits they select for drought-tolerant wheat."

Dong had previously made observations on the leaf surface features of dozens of desert plants in Central Asia, including observations of leaf cuticle and wax, but had not yet done in-depth research on the leaf wax of annual field crops such as wheat.

The other corresponding author for the study was Dr. Sarah Feakins, associate professor of earth sciences at the University of Southern California's Dornsife College of Letters, Arts and Sciences. Funding was provided by AgriLife Research and the Texas Wheat Producers Board.

"Leaf wax creates a boundary between the plant leaf and the atmosphere and reflects the plant's adaptation and response to environmental stresses, including drought," Dong said. "Ideally, water loss through a plant's cuticle layers should be minimized for plants to conserve water in terrestrial environments.

"We were interested in learning about leaf wax and its value in influencing the water permeability of plant epidermal cells. We also wanted to learn about how wax might be related to crop tolerance to heat."

The researchers examined plant wax traits and responses to the environment in irrigated winter wheat, a common agricultural monocot. They quantified the concentration of one main component of leaf wax alkanes, as well as leaf water-use efficiency through carbon isotopic composition.

An abstract of the study, published in the Organic Geochemistry journal, can be found at http://bit.ly/2w1ZaLn.

"The goal was to identify those traits that would better allow wheat to grow in areas with limited water resources and harsh weather conditions and still produce adequate yields," Dong said. "Being able to identify and breed more drought-tolerant crops will be even more important in the future as we try to feed a growing world population on less available agricultural land and fewer water resources."

The researchers conducted field-growth studies of winter wheat—one in Uvalde in the Texas Winter Garden area and another in Amarillo in the Texas High Plains. They sampled leaves from 10 different varieties grown under full irrigation as well as deficit irrigation of 13 and 25 percent.

"We found there were about 50 percent higher concentrations of leaf wax in winter wheat under 25 percent deficit irrigation at the Amarillo site, leading us to suggest wheat breeders may want to select to ensure these higher concentrations along with other traits associated with heat and drought tolerance," Ibrahim said.

Ibrahim added that breeders cannot rely on single traits, but must rely on multiple traits in addition to yield performance under drought stress conditions.

Ibrahim said Texas A&M AgriLife has a small grains improvement team, with centers of excellence in both the main campus in College Station and in Amarillo. Team members have been investigating traits associated with biotic and abiotic stresses tolerance and improved selection and breeding methods for wheat and other small grain crops in Texas for many years.

"This work builds on work done previously by AgriLife personnel, including Dr. Dirk Hays and myself on leaf wax and by Drs. Jackie Rudd, Qingwu Xue, Shuyu Liu and myself on multiple drought tolerance traits in the Texas High Plains, Rolling Plains and in South and Central Texas," he said.

Dong said demonstrating there was a significantly larger concentration of wax in the leaves of winter wheat grown in the High Plains area helped validate the premise that plants which survive drought conditions in the natural ecosystem are likely to have these higher concentrations.

He said bulk leaf and leaf wax analyses through carbon isotopes in the plant leaves and waxes yielded broadly similar insights for plant water use efficiency.

He said having the wax composition information from the study will also allow investigation into whether some component is related to resistance to leaf rust, a fungal leaf disease that is a major factor affecting wheat yield.

"The study information will also facilitate understanding of the ecophysiology of leaf wax in relation to drought and heat stress tolerance and production in other crops," he noted.

Dong said there are 180 plots of corn and sorghum being grown under the same two irrigation regimens in Uvalde as part of a collaboration with AgriLife Research crop breeders.

"Of the 15 hybrids of corn and sorghum each, there are five or six that are either drought tolerant or drought susceptible," he said, "It would be interesting to determine the leaf wax thickness and composition of some of these plants."

He also noted Liu is currently at USC to do additional analysis on samples collected from the second year of winter wheat trials in the Winter Garden and High Plains regions.

Dong said another aspect of research he is excited about is the collaboration between plant scientists and geoscientists in studying leaf wax structural constituents that affect both agronomic stress tolerance and future carbon sequestration.

"Leaf alkanes belong to a group of long-lived substances that, once deposited, can be preserved over a geological time scale," he explained. "What we do today and in future crop breeding may have a significant impact for carbon balance on a global scale, especially considering the intensified agricultural activities taking place on the world's arable land."