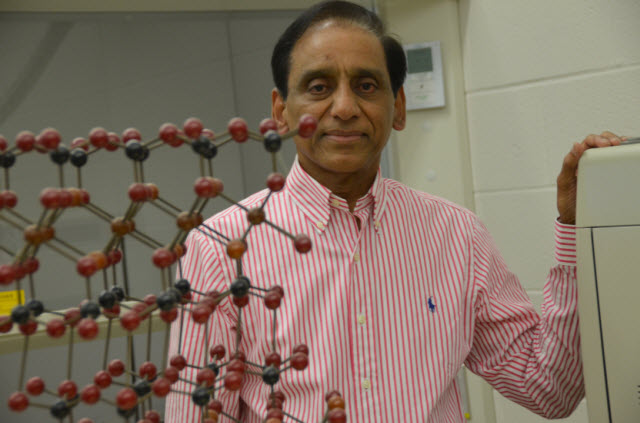 Five years after the earthquake and subsequent tsunami that caused the partial meltdown of the Fukushima Daiichi nuclear power plant, more than 10 million bags of contaminated topsoil sit in radioactive pyramids scattered across the landscape. Contaminated water flows through the radioactive ground into the ocean or is captured and stored on the power plant site until some method of disposal can be figured out.

In a series of high profile journal articles published over the past 30 years, Sridhar Komarneni has explored ways to remove radioactivity from the environment. A materials scientist and Distinguished Professor of Clay Mineralogy, Komarneni develops specially structured synthetic clays capable of immobilizing radioactive species by ion exchange.

“When I came to Penn State we had a large program on nuclear waste disposal. Even before that I was at Wisconsin for my Ph.D. working on a Department of Energy program involving selective uptake and fixation of cesium, strontium, and other ions,” Komarneni said. “There were many people working in the field, including Rustum Roy.”

Roy, a noted Penn State materials scientist who died in 2010, coauthored a 1988 paper in the journal Science with Komarneni describing the selective uptake of cesium (137Cs), a radioactive contaminant that was widely dispersed through the environment in the Chernobyl nuclear reactor accident. The material they used to make what they called a cesium ion sieve was a natural mica that they processed though low-temperature leaching to make a structure that was ideal for the exchange and chemical immobilization of cesium at room temperature.

“With nuclear waste solutions, you have so many species, the most dangerous of which are cesium and strontium,” said Komarneni. “At that time we mostly worked on cesium. None of the naturally occurring materials were very good at strontium uptake.”

Komarneni continued his work on cesium, this time with Della Roy, the wife of Rustum and an expert on cement. The material they studied was tobermorite, a phase that forms when zeolites interact with cement. At that time, there was interest in disposing of radioactive materials by mixing it with clay and depositing it in deep boreholes in the earth, which were then filled in with a mixture of backfill materials and cement. However, when the clays interacted with cement and formed the tobermorite phase, the cesium was released into the environment.

Komarneni and Della Roy developed a synthetic tobermorite in which the silicon atoms were substituted out with aluminum atoms. This material turned out to be a much better cesium exchange material and much more stable in cement. They also published their results in the journal Science.

“Then our sights turned to strontium uptake, because that was not yet possible until we began,” Komarneni recalled.

They based this new research on a novel material called brittle micas discovered by a group in Spain. Komarneni was excited by the Spanish researchers’ paper because he realized the special structure of their brittle mica could be used as a potential strontium selective material.

“The material they had made was not very good for exchange applications because they were in large flakes, and that meant diffusion took forever. The flakes were large enough to determine the structure, but too large to be useful,” he said.

Their synthesis method also resulted in minute quantities of material.

Komarneni, Rustum Roy, and William Paulus, the latter Komarneni’s MS student now at General Motors, developed a synthesis method that could be easily scaled up and that produced small particles of Na-4-mica that selectively exchanged strontium ions and locked them up in holes at room temperature.

“We made the almost perfect material and characterized it thoroughly,” Komarneni said. “Then we studied many ions to get clues about the mechanism of ion exchange. We discovered that this material is extremely selective for copper, strontium, barium, and radium. This was the beginning of our work on synthetic clays.”

They published their findings in the journal Nature.

Many locations in Pennsylvania, and also around the world, have problems with wells and groundwater contaminated with naturally occurring uranium.

“It’s the radon problem,” said Komarneni. “Wherever there is radon, there is radium. It’s a huge problem in some wells and water systems.”

In a paper published in Nature in 2001 titled “Superselective clay for radium uptake,” Komarneni and collaborators Paulus, and Naofumi Kozai of the Japan Atomic Energy Research Institute tested a variety of synthetic micas and natural clays to determine their capacity to exchange radium and fix it for disposal. They tested the materials in a solution containing a million times more sodium than radium and found that their synthetic micas were highly selective for radium. They had the results analyzed using radioactive radium in a Japanese facility by a former student of Komarneni who had returned to Japan. Their materials were by far the best at taking up radium, Komarneni said.

They also proposed their clays for water systems in Wisconsin that had problems with radium, but no one took it up.

The same material was applied to copper-contaminated soils in Chile. Copper, too, is toxic in large quantities, and Chile has the largest copper mines in the world. Heavy metals accumulate in plants, and in animal and human tissue and are known to be carcinogenic. In 2005, Komarneni’s student, Jason Stuckey, along with Chilean researcher Alexander Neaman, field tested their clay on contaminated soil near copper mines. They mixed the clay with the copper contaminated soil, and the clay soaked the copper out of the clay and fixed it in place, resulting in soil in which crops could grow without taking up copper and clean ground water.

A legacy of the nuclear weapons industry in the U.S., the Hanford Nuclear Reservation in Washington State contains 53 million gallons of high-level radioactive waste, 25 million cubic feet of solid radioactive waste, and 200 square miles of contaminated groundwater. In April 2016, a serious leak was discovered in one of the 177 underground tanks containing the waste. Although no waste leaked into the environment, the failure of the tank was alarming, as the Hanford site is near the Columbia River. Already, 1 million gallons of liquid waste has leaked into the ground, threatening fish, wildlife, and Native American habitat.

The Hanford site is in the midst of the largest environmental clean-up in the U.S., a project that has been ongoing for 25 years and is expected to continue for decades more. The same material was tested by Komarneni and colleagues at Hanford with actual well water contaminated with radioactive radium, and they compared the clay with the best commercial materials available at Hanford. Their results showed that Komarneni’s clay was superior to existing commercial materials by 4 to 5 times and could be used to help clean up the Hanford site, Komarneni believes.

“After Fukushima, we got interested again in cesium, because the most volatile contaminant in radioactive materials is cesium,” he said. “And that spread a couple of hundred kilometers across Japan. Strontium is not so volatile, so it is closer to the accident site.”

Recently, Komarneni’s group discovered a new material, tin phosphate, which has excellent cesium uptake properties, especially in the highly acidic solutions that were used to extract cesium from contaminated soils of Fukushima. The Japanese government has begun using a commercially available synthetic zeolite-like material called crystalline silico-titanate invented by researchers at Sandia National Lab and Texas A&M University in the ‘90s and licensed to a division of Honeywell to remediate the site.

Komarneni, Wenyan Huang, a visiting scholar from China, and others tested their tin phosphate material against silico-titanate and found tin phosphate was far better at cesium uptake. Those findings were published just last year in Chemical Communications.

“The idea is somebody will have to produce this. We don’t have any commercial product. We showed clearly that our material is better. The higher the acidity the better our material performs, because it is stable under highly acidic conditions,” Komarneni said.

Pollution in India and China

There are big problems with soil and water pollution around the world, but especially in the developing countries, including India and China. For example, in China there is heavy metal contamination in many locations from unregulated industry. There are some 459 so-called cancer villages spread across almost every province in the country, in which large clusters of cancer deaths occur. Cancer rates overall have increased by 80 percent over the past three decades, attributed to air pollution in cities and the pollution of rivers and lakes in the countryside. In India, heavy metals such as lead, cadmium, and chromium have been found in the groundwater of 113 districts.

“In China, there is also dye pollution in rivers. We are working on all of those things,” Komarneni said. “For example, we are working on photocatalytic decomposition. We are developing materials that can be used for destroying these organic chemicals in dyes using only visible light.”

Most heavy metals are cations, meaning they have a positive charge. Many materials are available to remove cations, he said, because they are easier to take up through ion exchange. Anions, or negatively charged ions, are much more difficult to deal with. Anions are very mobile in soil, air, and water; many toxic species are anions.

One example of a toxic anion is chromium or its anion chromate. Chromate is a product of leather tanning, where it is used to dilapidate hides, and is commonly used in several other industrial processes. Chromate and chromium poisoning is a wide-spread problem in many developing countries. Tanneries in Nepal, Bangladesh, and India, where many tanneries are found, dump their industrial wastes directly into rivers where they can leak into soil and groundwater. People also drink and swim in the polluted waterways and use the water for washing and cooking. Some 17 million people are estimated to be at risk.

“For chromate, we are developing ion exchange materials for removal from drinking water and waste water,” Komarneni said.

They have also developed what they call clay organic nanocomposites that can be used for the removal of anions like chromate, arsenite, arsenate, and especially perchlorate.

Perchlorate is made up of one chlorine atom bonded to four oxygen atoms. Perchlorate affects the thyroid gland, causes endocrine disruption, and is a likely carcinogen. Used in explosive materials and rocket fuel as a propellant, perchlorate pollution has been found in Lake Mead in Nevada and in the Colorado River, the water resources for a large part of the Southwest.

Perchlorate is a major issue in Redlands, CA, where an underground plume of contaminated groundwater has affected the drinking water supply and closed water wells. The soil is contaminated with perchlorates from decades of pollution by a defense contractor making rocket fuel.

“There they are using surfactant-loaded activated carbon to treat drinking water,” Komarneni said. “They have columns of activated carbon and they percolate water through them to remove perchlorate.”

However, this method has drawbacks, because there is not a strong chemical bond to lock the anions in, and some of the perchlorate can leach out into the water along with the surfactants. Instead of that method, Komarneni is proposing to use clay organic complexes, which can also remove the perchlorate successfully while also locking it up inside the clay structure.

“We are developing these cost effective materials that can also be used for water treatment or wastewater treatment,” Komarneni said.

Stuck in the lab

Komarneni is at a loss to understand why his discoveries have not been taken up by the U.S. government, which funded most of his research, or other governments he has tried to interest, including Japan and China.

“A government official of Jordan asked me to provide them with a pound or two, but we don’t make large amounts. I don’t understand why the Japanese didn’t take this up. They already make synthetic clays for things like cosmetics. They could do it easily,” he said.

Maybe it’s because they are too expensive?

“No, it shouldn’t be expensive. Natural clays can be used very easily to make synthetic clays,” he said. “Unless I start a company myself, I doubt this will ever go out of the lab.” 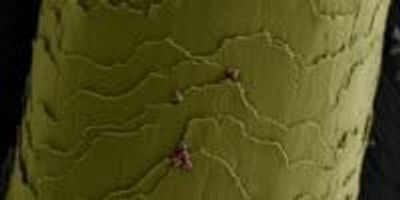 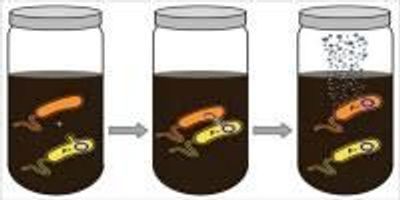