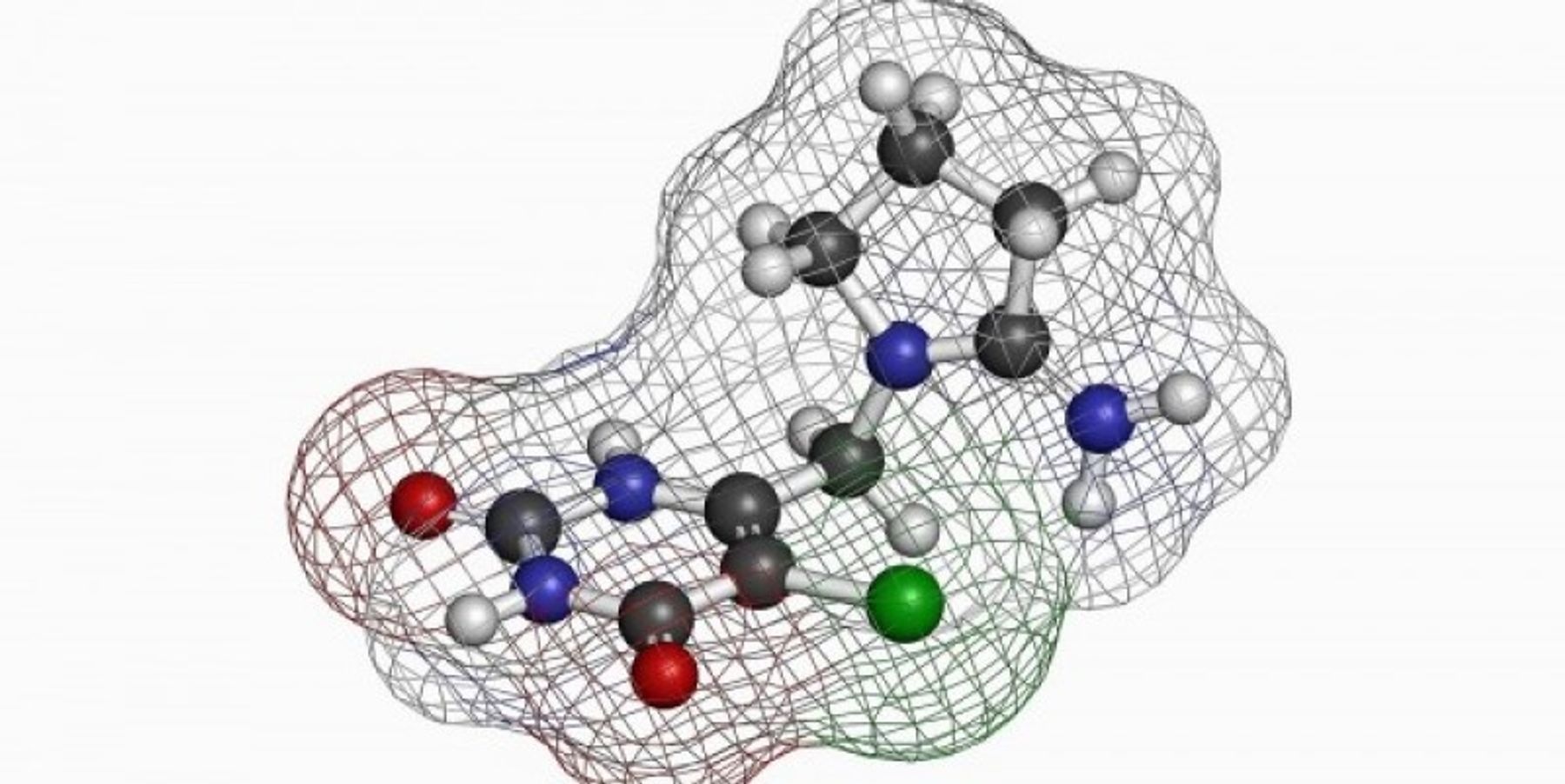 Illustration of a molecule of tipiracil, a drug used to fight cancer that may inhibit the action of one of the main proteins that make up SARS-CoV-2, the virus that causes COVID-19.
by Shutterstock/StudioMolekuul

The COVID-19 pandemic has caused more than 600,000 deaths in the United States since the start of 2020 and more than 4 million globally. The search for effective treatments against the disease are ongoing, and one hurdle is that SARS-CoV-2, the virus that causes COVID-19, has a number of tricks up its molecular sleeve when it comes to infecting people.

In a recent study published in the Nature journal Communications Biology, researchers from the US Department of Energy’s (DOE) Argonne National Laboratory and the University of Chicago identified a way to interfere with a sneaky mechanism the virus uses to prevent a response from an infected person’s immune system.

This new weapon against COVID-19 actually comes from the fight against cancer, as scientists have found that tipiracil, a drug used to treat colorectal cancer, can inhibit the action of one of the main proteins that make up SARS-CoV-2.

SARS-Cov-2 is a ribonucleic acid (RNA) virus. RNA is a type of genetic code that can be translated into proteins that allow the virus to replicate. During its RNA duplication, the virus would typically have a distinct chemical genetic signature—a string of molecules, or bases, that appends to one end of SARS-CoV-2’s RNA backbone.

This chemical signature would normally be recognizable by the body and produce an immune response, but the virus has a special way of hiding the extra molecules and sneaking into the body undetected. The research team used the resources of the Advanced Photon Source (APS), a DOE Office of Science User Facility at Argonne, to test a new treatment option that may foil this mechanism.

The research was led by Andrzej Joachimiak of Argonne and the University of Chicago, with Argonne protein crystallographer Youngchang Kim and University of Chicago structural biologist Natalia Maltseva and their colleagues. Joachimiak is the director of the Structural Biology Center (SBC) at the APS, and the research team used the high-powered X-ray beams generated there to study one of the virus’s proteins, called Nsp15.

This protein acts like a molecular scissors, cutting regions of the virus that are involved in its ability to make copies of itself. As more and more of those strings of molecules—made up of uridine, one of the main components of nucleic acid—are produced, the Nsp15 molecule removes them, essentially giving the virus the haircut it needs to pass undetected undercover.

“Not all the functions of these proteins are fully understood yet, but some of them serve to cut the larger polyprotein into smaller functional units. The RNA gives you the blueprint and encoded proteins act as the scissors,” Joachimiak said.

The virus uses strings of uridine to duplicate itself and translate those copies into protein. Those strings of uridine would typically create an immune response, but the Nsp15 cuts it off, allowing the virus to proliferate and infection to spread. The tipiracil inhibits the action of Nsp15 by binding in the place where Nsp15 otherwise would.

In addition to tipiracil, another drug used for an entirely different malady may have applications in treating COVID-19.

Scientists from Yale University have used the APS to study the structure of perampanel, an anti-seizure medication, as a starting point for inhibitor design. Modifying perampanel to create new configurations of the drug gave researchers new molecules that were effective against SARS-CoV-2. These new molecules would be used along with remdesivir, a current therapeutic agent for COVID-19.

The Yale researchers, William Jorgensen and Karen Anderson, used a combination of X-rays and computers to target the main SARS-CoV-2 protease, a key enzyme that plays an important role in COVID-19 infection. Perampanel was one of 14 drugs identified from a virtual screening effort to discover potential inhibitors of SARS-CoV-2, from an initial survey of about 2,000 known drugs. The research team found these new analogs of perampanel to be effective against the main protease, especially when combined with remdesivir.

The results of their research were published by the American Chemical Society.

“These structures will almost certainly be used by many other investigators for designing additional antiviral agents,” said Anderson, a professor of pharmacology and molecular biophysics and biochemistry at Yale, and co-director of developmental therapeutics for the Yale Cancer Center and William Jorgensen, Sterling Professor of Chemistry in the Chemistry department at Yale.