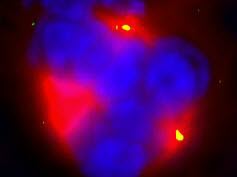 Taxanes induce tripolar instead of normal bipolar cell division. The daughter cells are more sensitive to radiation damage. DNA is stained in blue, tubulin in red and centrosomes in green.Image credit: Munich University HospitalTaxanes inhibit cell division and make cancer cells sensitive to radiation therapy. A current study has investigated the underlying mechanisms of this action—and which biomarkers may be useful for predicting the success of therapy. The study, published in the journal Oncogene, was carried out within the framework of the Clinical Cooperation Group Personalized Radiotherapy in Head and Neck Cancer at Helmholtz Zentrum München and Munich University Hospital.

Taxane-based radiochemotherapy* is widely used in the treatment of various locally advanced cancers—including non-small-cell lung carcinoma (NSCLC). Taxanes have two effects: they inhibit cell division, and they also sensitize tumor cells for radiation therapy. Researchers at the Department of Radiation Therapy & Radiooncology at Munich University Hospital and the Radiation Cytogenetics Research Unit at Helmholtz Zentrum München have now demonstrated in detail how this works.

Specifically, the scientists investigated the effect of Paclitaxel, a member of the taxane family isolated from the bark of the Pacific yew (Taxus brevifolia). "By using cell biological and biochemical approaches, we were able to show in the present study that clinically relevant doses of Paclitaxel induce tripolar instead of normal bipolar cell division," said first author Dr. Michael Orth of Munich University Hospital. Put in simple terms, instead of dividing into two cells, the cell divides into three. "Tumor cells that have undergone such cell division subsequently respond particularly well to radiation therapy."

However, the scientists found that not all tumor cells perform the taxane-mediated tripolar cell division and thus are sensitized to radiation. "The cells that respond are primarily cells that contain higher levels of the protein kinase AURKA and its cofactor TPX2," said Professor Kirsten Lauber of Munich University Hospital. Both molecules are involved in cell division.

"We were also able to confirm the clinical relevance in a publicly accessible data set of 114 lung cancer patients," said Dr. Kristian Unger, deputy head of the Radiation Cytogenetics Research Unit at Helmholtz Zentrum München. "Patients with particularly high expression levels of AURKA and TPX2 in the tumor had significantly longer overall survival times when treated with taxane-based radiochemotherapy."

Accordingly, the scientists hope that they will be able to use the two molecules as biomarkers in the future in order to identify patients who can particularly benefit from taxane-based radiochemotherapy as well as patients for whom other options need to be chosen.

Co-author Professor Claus Belka, director of the Clinic and Policlinic for Radiation Therapy and Radiation Oncology of Munich University Hospital and member of the German Consortium for Translational Cancer Research (DKTK), summarized the perspectives: "The present study identifies AURKA and TPX2 as the first mechanism-derived biomarkers of taxane-based radiochemotherapy. This is an important prerequisite for personalized therapy decisions." In the future, the scientists want to further investigate the molecules and examine their capacity as predictive biomarkers of taxane-based radiochemotherapy.

* Taxanes are naturally occurring cytostatics, i.e. substances that inhibit cell growth or cell division. Radiochemotherapy (RCT) is a combination of radiation therapy (e.g. gamma irradiation) and chemotherapy (such as the administration of cytotoxic drugs) used in the treatment of malignant tumors. RCT is often more effective than either radiation or chemotherapy alone.