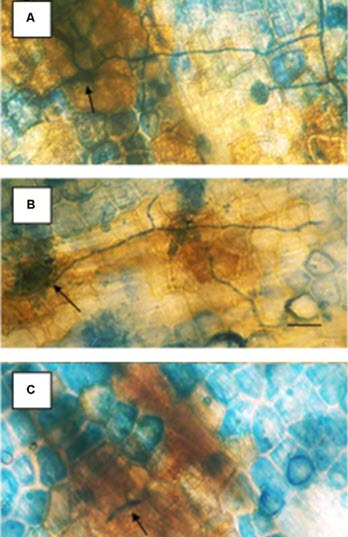 This is the effect of different concentrations of actinomycin D applied to pea tissue. The top image is lower concentration of the drug, the bottom the highest concentrationCREDIT: WSU

Cancer-fighting drugs used on humans can help plants fight disease as well. That discovery, by two Washington State University plant pathologists, could help scientists develop new pathways for plants to battle infection, as revealed in a paper in the journal Frontiers in Plant Science.

Lee Hadwiger and Kiwamu Tanaka from the WSU Department of Plant Pathology used anticancer drugs that change the DNA of cancer cells to slow or stop their growth when used in high levels on humans. But when the drugs are used in low levels in plants, they affect a cell's DNA by activating genes used to defend against pathogens.

The researchers applied a wide array of DNA-specific drugs, including actinomycin D, also known as dactinomycin, to pea tissue. There generally were two different results from those applications, with differing mechanisms of action.

First, the plants started producing higher levels of an antimicrobial substance called pisatin, a known marker that shows a plant's defense system is turning on.

Then, the scientists exposed the treated plants to fungal infections. The exposed plants stopped the infection within hours.

Hadwiger and Tanaka don't foresee using anticancer medications on crops, but this discovery helps build a deeper understanding of how the chemicals interact with plant DNA.

"We used these drugs as a tool to understand how plants defend themselves from pathogens," said Hadwiger. "We now understand how these defense genes can be activated and are using that knowledge to develop disease resistance against fungal infections and other pathogens."

This research didn't start with the goal of seeing what happened when you applied anticancer drugs to plants.

"We needed a tool to stop the growth process in the plants and knew actinomycin D did that," Hadwiger said. "We thought we did something wrong because it didn't work at all."

Then they used the drug in much smaller concentrations on the pea plants than what is used to fight cancer.

"We finally figured out what was going on with the different reactions based on high and low concentrations," Hadwiger said.

Plant and animal genes are activated in similar ways, so the scientists assumed the drug would work the same on the plants as in humans. But DNA doesn't recognize a drug as anticancer medication, it's just something new altering its makeup.

The plants recognize the chemistry of whatever compound it interacts with. That's why the same compounds act in both plants and animals.

"Cells only recognize the chemistry shot at them," Hadwiger said. "We didn't expect anticancer drugs to help plants fight pathogens. But once we understood the interaction, it made sense."

Tanaka said that while nobody expects to apply chemotherapy drugs on crops, this discovery will have an impact.

"In basic research, when you actually understand the workings or mechanisms of something, you'll be able to apply it to real-world use," Tanaka said. "We think this will have important impacts for growers that will help better fight pathogens in the near future."