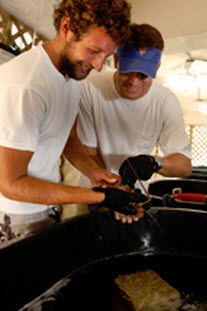 Caribbean spiny lobsters practice “behavioral immunity” to prevent them from contracting a lethal disease and, therefore, stay healthy. This helps preserve a $50 million-a-year Florida industry. UF/IFAS Associate Professor Don Behringer, right, worked with other scientists on the study that used data from a massive sponge die-off in the Florida Keys.Photo Credit: UF/IFASUF/IFAS Associate Professor Don Behringer worked with Old Dominion University Professor Mark Butler on the study, published online June 10 in the journal PLOS ONE. In the study, scientists showed how the Caribbean spiny lobster uses a form of behavioral immunity to prevent the spread of the PaV1 virus, which takes a heavy toll on their populations.

“Increased infection risk has long been deemed a cost for the many benefits of being a social animal. However, we have shown that a social marine animal, the spiny lobster, has developed behaviors to reduce disease transmission by avoiding infected individuals,” said Behringer, a UF/IFAS scientist in the School of Forest Resources and Conservation Program in Fisheries and Aquatic Science. “Further, this behavioral immunity keeps potential epidemics of PaV1 from occurring.”

Behringer, Butler and other scientists studied data from a 2007 massive sponge die-off in a 926-square mile area of the Florida Keys. Many of the sponges were as big as car tires. Without the sponges, juvenile lobsters aggregated in high numbers in the remaining shelters or moved elsewhere.

“This area is a key nursery habitat for juvenile spiny lobsters, and sponges are their primary shelter,” said Behringer, who’s also affiliated with the UF Emerging Pathogens Institute. “Shelter from predators is of utmost importance during their juvenile stage.”

Researchers also introduced either a healthy or an infected lobster to other lobsters living naturally under sponges that had survived. Healthy lobsters left dens following introduction by lobsters infected with the PaV1 virus, despite the scarcity of other shelters and the high risk of being preyed upon while searching for a new shelter. And they stayed away. On the other hand, when a healthy lobster was introduced, the lobsters that were already there stayed in the den.

The combination of field surveys after the sponge die-off, experiments and simulation modeling supports the hypothesis that spiny lobsters practice behavioral immunity and that it can suppress a likely marine epidemic, Behringer said.

“Understanding all we can about its impacts and the natural ways lobsters reduce infection risk is of great economic importance,” he said.