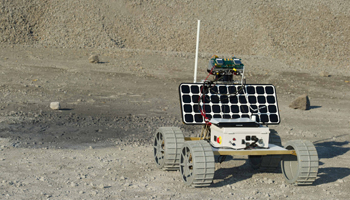 Andy, which derives its moniker from university namesakes Andrew Carnegie and Andrew Mellon, was developed over the last nine months by a largely student workforce and drew on expertise and resources from across the university, including the School of Computer Science, the College of Engineering, the College of Fine Arts and the Mellon College of Science.

The robot is Carnegie Mellon's contribution to an effort led by Pittsburgh's Astrobotic Technology to land a robot on the moon and win the $20 million-plus Google Lunar XPrize. It also represents a larger ambition.

"We don't do anything just to win a prize," Whittaker said. "If we're on the moon anyway, we're going to do something while we're up there."

One possibility is to use Andy to explore lunar pits.  These are giant, newly discovered, steep-sided holes created by the collapse of underground voids.

"These pits are astounding and unexplored; it will be like coming upon the Grand Canyon," Whittaker said. "Some pits might be entrances to caves.  You can't explore caves from a satellite; you've got to be there, on the ground, so robots are the next big step." 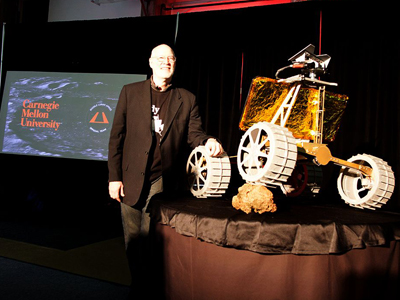 William "Red" Whittaker, professor of robotics and director of the Field Robotics Center, with Andy.Carnegie Mellon UniversityAndy's wide stance, low center-of-gravity and high belly clearance combine for unprecedented stability, slope-climbing and straddling of rocks. Whittaker noted that Andy achieves its superb mobility with very wide wheels and light weight. Andy's wheels are a foot in diameter, which is exceptional for a three-foot rover.  Its weight on the moon will be less than 10 pounds.

Jon Anderson, a master's degree student in robotics, led the mobility team. The team's innovations gave Andy the softest footprint and greatest strength-to-weight ratio of any space rover to date.  The rover has strong pulling power and a novel suspension for transferring that power to the ground.

Extraterrestrial robots encounter radiation levels that can burn ordinary electronics.  Before flight, some of Andy's electronics will be further upgraded with space-certified parts, but the Andy team has already achieved notable reliability and space tolerance using high-reliability terrestrial parts, multiples of some critical components, and innovative software for detecting faults and switching between components as necessary.

Joe Bartels, a Ph.D. student in robotics, explained that a spare component can take over operations permanently if its twin is fatally damaged, or temporarily if its twin can be recovered by rebooting following a failure.

In addition to scientific exploration, Andy will accommodate a number of artistic payloads coordinated by Lowry Burgess, professor of art, and Mark Baskinger, associate professor of design. More information about Andy and Carnegie Mellon's Lunar Exploration Initiative is available online at http://www.cmu.edu/google-lunar-x/.

Carnegie Mellon's Robotics Institute has led the development of a number of planetary robotic technologies for NASA, including walking robots for exploring active volcanoes, robots designed for extraterrestrial drilling and advanced wheel development. Autonomous driving software originated at Carnegie Mellon is the basis of navigation and safeguarding for NASA's Mars rovers.