Dec 05, 2016University of Alabama at Birmingham 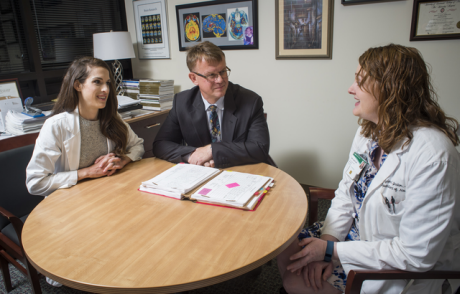 Leslie Perry, MD, Jerzy Szaflarski, MD, PhD, and Tyler Gaston, MD, are among the UAB researchers presenting findings of the CBD oil studies.Photo courtesy of the University of Alabama at BirminghamCannabidiol oil, also known as CBD oil, reduces the frequency and severity of seizures in children and adults with severe, intractable epilepsy, according to findings presented by researchers from the University of Alabama at Birmingham at the American Epilepsy Society 70th Annual Meeting.

UAB researchers presented 11 abstracts, or research findings, at the meeting. A key finding was that CBD provided a significant reduction in frequency of seizures for a majority of the patients in the study, and that approximately two-thirds of patients saw a greater than 50 percent reduction in severity.

“It is encouraging that both frequency and severity of seizures appear to improve in the majority of patients in our study, patients who have limited treatment options,” said Jerzy P. Szaflarski, MD, PhD, professor in the Department of Neurology and director of the UAB Epilepsy Center. “Our research adds to the evidence that CBD may reduce frequency of seizures, but we also found that it appears to decrease the severity of seizures, which is a new finding.”

The results were based on an open-label study of 81 patients—42 children and 39 adults—who experienced four or more seizures per month. UAB launched the studies of CBD oil as a treatment for severe, intractable seizures in April 2015. The studies, an adult study at UAB and a pediatric study at Children’s of Alabama, were authorized by the Alabama Legislature in 2014 by legislation known as Carly’s Law.

“These are encouraging results, but it is important to note that each patient may respond differently to CBD, and the dose for optimal seizures control varies,” said Martina Bebin, MD, professor of neurology and co-primary investigator of the CBD studies. “There appears to be an optimal CBD dose range where the patient achieves maximum benefit. If outside this CBD dosing range, the seizure frequency may not improve and may even increase. More research is needed, including determining why and how CBD helps some people with epilepsy but not others.”

Among the other UAB abstracts presented at the AES meetings:

The studies are designed to test the safety and tolerability of CBD oil in patients with intractable seizures. CBD oil, a derivative of the cannabis plant, is delivered orally as an oily liquid.

The oil used in the studies is produced under stringent requirements of the United States Food and Drug Administration by a licensed pharmaceutical company. It contains only traces of THC, the psychoactive component of marijuana. The process developed by GW Pharmaceuticals guarantees the consistency of the product that is provided to study participants.