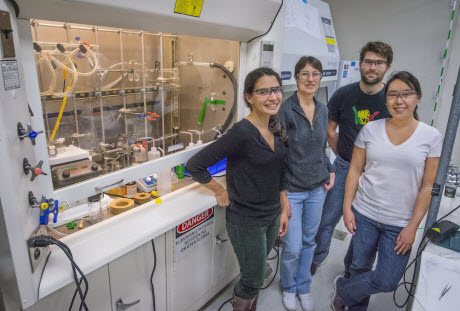 From left, Rebecca Abergel, Stacey Gauny, Manuel Struzbecher-Hoehne, and Dahlia An are four of the co-authors of a new paper on the biological chemistry of radioactive metals.Photo credit: Roy Kaltschmidt/Berkeley LabScientists at Lawrence Berkeley National Laboratory (Berkeley Lab) have reported a major advance in understanding the biological chemistry of radioactive metals, opening up new avenues of research into strategies for remedial action in the event of possible human exposure to nuclear contaminants.

Research led by Berkeley Lab’s Rebecca Abergel, working with the Fred Hutchinson Cancer Research Center in Seattle, has found that plutonium, americium, and other actinides can be transported into cells by an antibacterial protein called siderocalin, which is normally involved in sequestering iron.

Their results were published online recently in the journal Proceedings of the National Academy of Sciences in a paper titled, “Siderocalin-mediated recognition, sensitization, and cellular uptake of actinides.” The paper contains several other findings and achievements, including characterization of the first ever protein structures containing transuranic elements and how use of the protein can sensitize the metal’s luminescence, which could lead to potential medical and industrial applications.

Abergel’s group has already developed a compound to sequester actinides and expel them from the body. They have put it in a pill form that can be taken orally, a necessity in the event of radiation exposure amongst a large population. Last year the FDA approved a clinical trial to test the safety of the drug, and they are seeking funding for the tests.

However, a basic understanding of how actinides act in the body was still not well known. “Although [actinides] are known to rapidly circulate and deposit into major organs such as bone, liver, or kidney after contamination, the specific molecular mechanisms associated with mammalian uptake of these toxic heavy elements remain largely unexplored,” Abergel and her co-authors wrote.

The current research described in PNAS identifies a new pathway for the intracellular delivery of the radioactive toxic metal ions, and thus a possible new target for treatment strategies. The scientists used cultured kidney cells to demonstrate the role of siderocalin in facilitating the uptake of the metal ions in cells.

“We showed that this protein is capable of transporting plutonium inside cells,” she said. “So this could help us develop other strategies to counteract actinide exposure. Instead of binding and expelling radionuclides from the body, we could maybe block the uptake.” 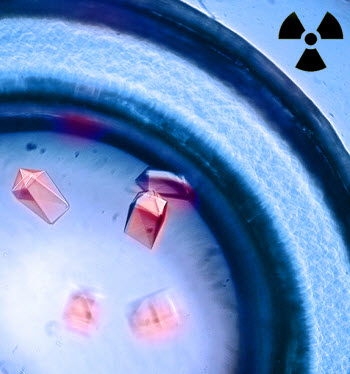 “These are the first protein structures containing thorium or the transuranic elements plutonium, americium, or curium,” Abergel said. “Until this work there was no structure in the Protein Data Bank that had those elements. That’s an exciting thing for us.”

The researchers also made the unexpected finding that siderocalin can act as a “synergistic antenna” that sensitizes the luminescence of actinides and lanthanides. “We showed that by adding the protein we enhance the sensitization pathways, making it much brighter,” Abergel said. “That is a new mechanism that hasn’t been explored yet and could be very useful; it could have applications down the line for diagnostics and bioimaging.”

Abergel notes that a study like this would have been possible in very few other places. “Very few people have the capabilities to combine the different approaches and techniques—the spectroscopy techniques at the ALS, handling of heavy elements that are radioactive, plus the chemical and biological tools we have onsite,” she said. “The combination of all those techniques here is very unique.”

The work was funded by the Department of Energy’s Basic Energy Sciences program in the Office of Science and the National Institutes of Health. The paper’s co-authors are Benjamin Allred, Stacey Gauny, Dahlia An, Corie Ralston, and Manuel Sturzbecher-Hoehne of Berkeley Lab, and Roland Strong and Peter Rupert of the Hutchinson Center.