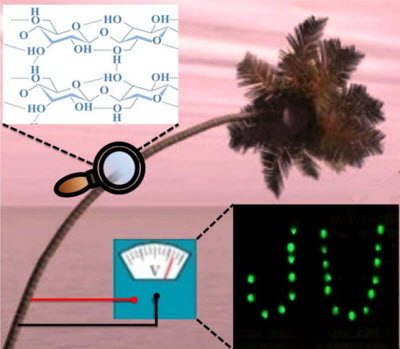 Implantable electronics to monitor vital signs and perform other functions could one day be powered with tiny generators that harvest the body's energy.Image courtesy of the American Chemical SocietyImplantable electronics that can deliver drugs, monitor vital signs, and perform other health-related roles are on the horizon. But finding a way to power them remains a challenge. Now scientists have built a flexible nanogenerator out of cellulose, an abundant natural material, that could potentially harvest energy from the body—its heartbeats, blood flow, and other almost imperceptible but constant movements. Their report appears in the American Chemical Society journal ACS Applied Materials & Interfaces.

Efforts to convert the energy of motion—from footsteps, ocean waves, wind and other movement sources—are well underway. Many of these developing technologies are designed with the goal of powering everyday gadgets and even buildings. As such, they don't need to bend and are often made with stiff materials. But to power biomedical devices inside the body, a flexible generator could provide more versatility. So Md. Mehebub Alam and Dipankar Mandal at Jadavpur University in India set out to design one.

The researchers turned to cellulose, the most abundant biopolymer on earth, and mixed it in a simple process with a kind of silicone called polydimethylsiloxane—the stuff of breast implants—and carbon nanotubes. Repeated pressing on the resulting nanogenerator lit up about two dozen LEDs instantly. It also charged capacitors that powered a portable LCD, a calculator and a wrist watch. And because cellulose is non-toxic, the researchers say the device could potentially be implanted in the body and harvest its internal stretches, vibrations, and other movements.

The authors acknowledge funding from the Science and Engineering Research Board of India and the University Grants Commission (India).