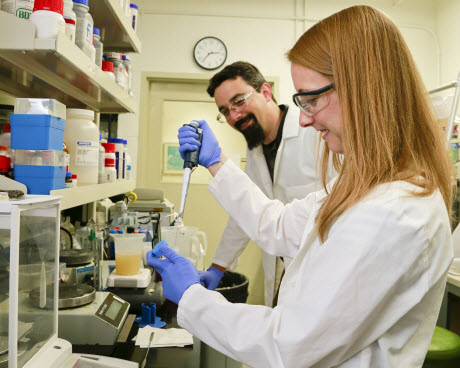 Beth Papanek, working with nutrients for bacterial growth, and Adam Guss are among the ORNL authors of a paper published in Metabolic Engineering.Photo courtesy of Oak Ridge National LaboratoryOAK RIDGE, Tenn., Aug. 14, 2015 – Another barrier to commercially viable biofuels from sources other than corn has fallen with the engineering of a microbe that improves isobutanol yields by a factor of 10.

The finding of the Department of Energy’s BioEnergy Science Center, published in the journal Metabolic Engineering, builds on results from 2011 in which researchers reported on the first genetically engineered microbe to produce isobutanol directly from cellulose.

Isobutanol is attractive because its energy density and octane values are much closer to gasoline and it is useful not only as a direct replacement for gasoline but also as a chemical feedstock for a variety of products. For example, isobutanol can be chemically upgraded into a hydrocarbon equivalent for jet fuel.

While the earlier work by BESC researchers at DOE’s Oak Ridge National Laboratory and the University of California at Los Angeles was important from a proof-of-principle perspective, this new result represents a significant gain.

“When we reported our initial finding four years ago, we were using Clostridium celluloyticium, which is a less complex organism from a metabolic engineering perspective,” said co-author James Liao of UCLA’s Henry Samueli School of Engineering and Applied Science. “With this paper, we have successfully engineered similar traits in the much higher yielding Clostridium thermocellum, and that has taken us to new levels of consolidated bioprocessing efficiency.”

Consolidated bioprocessing refers to the bundling of several processes in a single microbe that can be used to extract sugar from a plant’s cellulose and convert those sugars into a biofuel. This approach can be used to combine several steps – pretreatment, enzyme treatment and fermentation – to produce biofuel at a lower cost. The process also helps overcome the challenges of recalcitrance, or a plant’s natural defenses to being chemically dismantled. Recalcitrance is one of the primary economic barriers to using lignocellulosic biomass such as corn stover and switchgrass as a feedstock for biofuels.

While the previous genetically engineered microbe achieved conversion results of 0.6 gram of isobutanol per liter, Clostridium thermocellum has produced 5 to 6 grams per liter. Researchers accomplished this by inserting five genes into the microbe, enabling it to synthesize isobutanol. Scientists view this as a clear next-generation advance over strategies that use yeast to create biofuels from cellulose.

“In addition to this development, which moves the BESC team closer to the production goal of more than 20 grams per liter, the prospects of commercial realization of this approach are greatly enabled by the fact that the microbe works at temperatures high enough to keep competing bugs from contaminating the microbial fermentation tanks and interfering with the conversion process,” said Paul Gilna, director of BESC.

Authors note that microbial engineering challenges remain, but they are encouraged by this finding. Other authors of the paper, titled “Consolidated bioprocessing of cellulose to isobutanol using Clostridium thermocellum,” are Beth Papanek, Lauren Riley and Adam Guss of ORNL and Paul Lin, Lou Mi, Amy Morioka, Kouki Yoshino, Sawako Konishi and Sharon Xu of UCLA. The paper is available at http://www.sciencedirect.com/science/article/pii/S1096717615000804