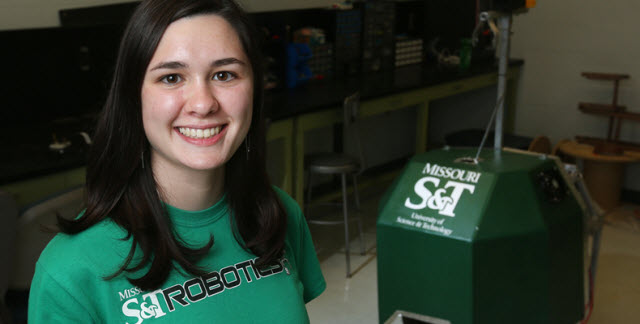 “I talked to them about how being a female engineer among men isn’t as intimidating as they thought,” she says.

Last year, Hernandez was a student diversity mentor. She met with an incoming freshman every other week to help him complete assignments and develop a resume. Most importantly, she encouraged him to keep going.

“I reminded him during any struggle that he could do it and that a career in STEM was really a possibility for him,” she says.

Hernandez has also interned at Molex, a manufacturer of electronic interconnectors. She is active in the Society of Women Engineers, is the electrical lead on the Robotics Team, and is a peer-learning assistant. Hernandez is also working on an Opportunities for Undergraduate Research Experience (OURE) project with Donald Wunsch, professor of electrical and computer engineering, that will link the mathematics behind artificial intelligence to algorithms that can make computers and robots more intelligent. In whatever free time she has left, she enjoys swimming, running and playing the clarinet.

Hernandez hopes that through her hard work as a mentor and recruiter, she can help minorities break down roadblocks to success.

“I think the biggest roadblock to minorities in STEM is that not enough people are being encouraged to do things differently now than they did in the past,” she says. “It’s also cultural stereotypes in media; women aren’t shown as engineers on TV. They’re shown as doctors and lawyers, but why not engineers?”

Hernandez is doing her part to break down those barriers.

“I always feel rewarded when people who have no interest in STEM come to a program and I can help show them how great engineering is,” she says.