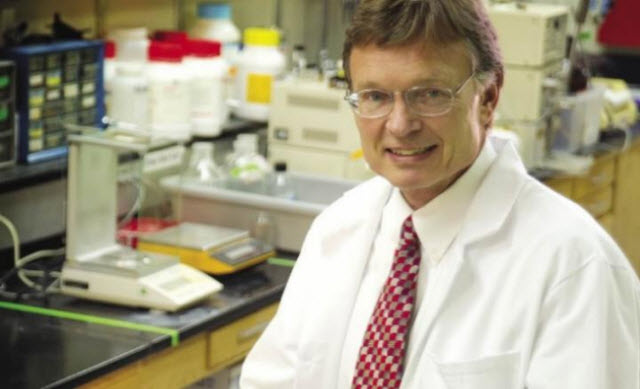 Daniel Armstrong, UTA's Robert A. Welch Chair in Chemistry and leader of the project.Photo Courtesy of: UTA

Chemists at The University of Texas at Arlington have invented a method to quantify water content in solid pharmaceutical drugs that is faster, cheaper, more accurate and more precise than Karl Fischer titration, the method currently recognized by the U.S. Food and Drug Administration and widely used worldwide.

Quantifying water content is one of the most common chemical tests, with more than 130 million processes carried out each year globally. Testing pharmaceutical drugs is required by the FDA and represents an important and costly investment on the part of drug manufacturers.

"Every therapeutic drug has a narrow range of optimal water content, which needs to be controlled to avoid potential adverse effects on patients," said Daniel Armstrong, UTA's Robert A. Welch Chair in Chemistry and leader of the project. "In addition to other advantages like speed and lower costs, our new system can also be automated, reducing labor costs for manufacturers with potential economic benefits for consumers."

In a paper published recently in the Journal of Pharmaceutical Sciences on "Water determination in Solid Pharmaceutical Products using Ionic Liquids and Headspace Gas Chromatography," Armstrong and his graduate student Lillian Frink described using a headspace gas chromatography analytical method with ionic liquid tubular capillary gas chromatographic columns, which were only commercialized this year. For the detector, they used the new Shimadzu Scientific Instruments Tracera GC-2010 Plus, which is extremely sensitive to water.

Chromatography is the process of separating a chemical mixture to measure its components. It's used in the fields of forensics, food and drug regulation, athlete testing as well as to solve critical medical problems like determining the antibodies that are more effective in neutralizing Ebola during the last epidemic.

Headspace gas chromatography or HSGC involves the measuring of volatile analytes, or chemical components, as they diffuse into a "headspace" at the top of a sealed vial containing the sample, including solids. The new method combines HSGC with the use of two different ionic liquids, one as a solvent in the tube of sample and one to line the ionic liquid column. Ionic liquids consist of a mixture of positively and negatively charged molecules and enable the separation.

The researchers compared the effectiveness and accuracy of their new method against two established methods, Karl Fischer titration and "loss on drying," which involves putting the sample in a vacuum oven over a period of hours to measure water content.

They found that loss on drying took many hours to complete, where their method could analyze samples in a total of 10 minutes, five minutes to heat the samples before analysis and a five-minute chromatographic run time. At the same time, Karl Fischer titration produced inaccurate results in many of the samples of household solid pharmaceutical drugs tested, which included vitamin C, Excedrine Migraine medicine, and acetaminophen from Target and Walgreens.

In addition, using the Armstrong method, only 10 milligrams of sample was needed due to the high sensitivity of the Shimadzu detector, creating an additional advantage for manufacturers. Ten milligrams is roughly equivalent to a light dusting of powder on a finger tip.

Frederick MacDonnell, chair of UTA's Department of Chemistry and Biochemistry, underlined the importance of this new method to improve drug testing methods as the university increases its focus on Health and the Human Condition within the Strategic Plan 2020: Bold Solutions|Global Impact.

"This is an example of where basic research on ionic liquids led to a very practical outcome with clear business implications for the pharmaceutical industry," MacDonnell said. "This may be the first new method that can really take aim at Karl Fischer titration, which has been the mainstay for measuring water content for more than 80 years."

The new paper builds on a initial research published in The Journal of Pharmaceutical and Biomedical Analysis in 2014 that focused on measuring water content in active pharmaceutical ingredients.

Armstrong has been a leader in characterizing and synthesizing ionic liquids. He also holds patents on several open tubular capillary gas chromatography columns that utilize ionic liquids, including those used in the current research.

He has received numerous awards over the course of his career, including the American Chemical Society Award in Separations Science and Technology in 2014 and the ACS Award for Chromatography in 1999. He was named a Fellow of the National Academy of Inventors in 2015 and an ACS Fellow in 2013. He has authored more than 550 publications and holds 23 U.S. patents.

Armstrong was ranked No. 8 in the Power List 2015 of the Top 100 most influential people in the world of analytical science by the monthly journal The Analytical Scientist.

This research was funded by the Robert W. Welch Foundation and used Shimadzu Scientific Instruments technologies, adapted specifically for this research.

UTA's Shimadzu Institute for Research Technologies was established in 2013 following a historic philanthropic gift to UTA from Shimadzu Scientific Instruments, the U.S. subsidiary of worldwide scientific instrument maker Shimadzu Corp., and support from the University of Texas System.

The Institute has the largest collection of Shimadzu scientific instrumentation in the U.S. and has wide-ranging analytical capabilities, ranging from the defining the properties of biomolecules, to materials science, brain imaging, or metals analysis in water, among others.

About The University of Texas at Arlington

The University of Texas at Arlington is a Carnegie Research-1 "highest research activity" institution of about 55,000 students in campus-based and online degree programs and is the second-largest institution in The University of Texas System. U.S. News & World Report ranks UTA fifth in the nation for undergraduate diversity. The University is a Hispanic-Serving Institution and is ranked as the top four-year college in Texas for veterans on Military Times' 2016 Best for Vets list. Visit http://www.uta.edu to learn more, and find UTA rankings and recognition at http://www.uta.edu/uta/about/rankings.php.