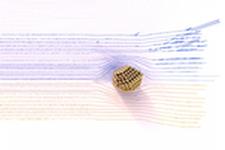 No energy transition without catalysts: On their own, the chemical processes necessary in order to manufacture hydrogen gas using electricity, to convert the hydrogen back into electrical energy in fuel cells, or to convert carbon dioxide into fuel take place too slowly to be of practical use. Catalysts accelerate the reaction without being used up themselves.

"Catalysts are of enormous importance for the industry. Hence, the industry has a great interest in further improving the materials in order to increase the efficiency of the processes", explains Aliaksandr Bandarenka, Professor for the Physics of Energy Conversion and Storage at the TUM.

Working together with his team, the chemist has now provided a crucial prerequisite for doing so: For the first time, a scanning tunneling microscope has successfully been used to examine the surface during a catalytic process. In this manner, it was possible to determine in detail the locations at which the reaction speed and hence the activity of the catalysts is the highest. The findings have been published in the journal Nature.

For a long time now, researchers have suspected that there is a relationship between the surface structure and the activity of heterogeneous catalysts, where chemical reactions take place at the boundary surface between a solid and a liquid or gas. Heterogeneous catalysts are used for example in the electrolytic production of hydrogen gas or for cleaning vehicle exhaust gases.

"However, the chemical reactions do not take place at the same speed at all locations. Instead, there are active centers on the surface of the catalysts", reports Bandarenka. "Previously, we had to rely on model calculations and indirect measurements to localize these centers."

With the new analysis procedure, the existence of the active centers can now be proven experimentally. Samples with catalyst materials -- including platinum and a combination of gold and palladium -- are covered with a liquid electrolyte layer and examined using a scanning tunneling microscope.

"Interestingly, the tunneling currents are not the same everywhere. There are areas where the current is stronger, but flows unevenly -- it is 'noisy' ", reports Bandarenka. The existence of this noise has been known for a long time, but to date, nobody has investigated what causes it.

During the evaluation of the data, the TUM team discovered a distinct relationship between the intensity of the noise and defects on the surface of the catalysts -- microscopically small steps, edges, or corners. "As the number of defects increases, so does the noise -- more electrons flow and hence more current as well", explains Bandarenka.

Viewed in terms of the chemical processes during electrolysis, this means the following: If the surface of the catalyst is too chemically attractive or repellent for the hydrogen ions, the reaction breaks down. The most effective areas are where ions are attracted, but do not remain for too long.

Small defects in the atomic lattice, but also borders between materials - for example palladium on gold - appear to create these ideal conditions for catalysis. But why? "Our experiments show that the number of neighboring atoms and the resulting strength of the bond is a crucial factor for activity", explains Oliver Schneider, one of the co-authors of the publication.

The TUM researchers now intend to use the findings to develop more effective catalytic materials with active areas that are as large as possible.