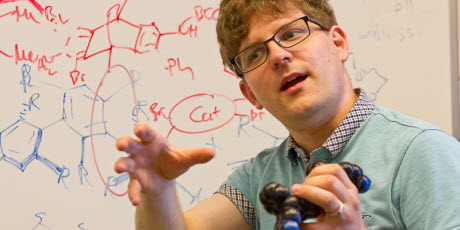 Over billions of years, evolution has found clever ways to fold proteins to do many jobs. People can’t wait that long. The hunt for new synthetic materials — like stronger polymers and more-targeted medicines — has chemists seeking for better ways to control the shapes of molecules. UVM assistant professor of chemistry Severin Schneebeli has found a revolutionary one.Photo credit: Joshua BrownHold up your two hands. They are identical in structure, but mirror opposites. No matter how hard you try, they can’t be superimposed onto each other. Or, as chemists would say, they have “chirality,” from the Greek word for hand. A molecule that is chiral comes in two identical, but opposite, forms—just like a left and right hand.

University of Vermont chemist Severin Schneebeli has invented a new way to use chirality to make a wrench. A nanoscale wrench. His team’s discovery allows them to precisely control nanoscale shapes and holds promise as a highly accurate and fast method of creating customized molecules.

This use of “chirality-assisted synthesis” is a fundamentally new approach to control the shape of large molecules — one of the foundational needs for making a new generation of complex synthetic materials, including polymers and medicines.

Experimenting with anthracene, a substance found in coal, Schneebeli and his team assembled C-shaped strips of molecules that, because of their chirality, are able to join each other in only one direction. “They’re like Legos,” Schneebeli explains. These molecular strips form a rigid structure that’s able to hold rings of other chemicals “in a manner similar to how a five-sided bolt head fits into a pentagonal wrench,” the team writes.

The C-shaped strips can join to each other, with two bonds, in only one geometric orientation. So, unlike many chemical structures — which have the same general formula but are flexible and can twist and rotate into many different possible shapes — “this has only one shape,” Schneebeli says. “It's like a real wrench,” he says — with an opening a hundred-thousand-times smaller than the width of human hair: 1.7 nanometers.

“It completely keeps its shape,” he explains, even in various solvents and at many different temperatures, “which makes it pre-organized to bind to other molecules in one specific way,” he says.

This wrench, the new study shows, can reliably bind to a family of well-known large molecules called “pillarene macrocycles.” These rings of pillarene have, themselves, often been used as the “host,” in chemistry-speak, to surround and modify other “guest” chemicals in their middle — and they have many possible applications from controlled drug delivery to organic light-emitting substances.

“By embracing pillarenes,” the UVM team writes, “the C-shaped strips are able to regulate the interactions of pillarene hosts with conventional guests.” In other words, the chemists can use their new wrench to remotely adjust the chemical environment inside the pillarene in the same way a mechanic can turn an exterior bolt to adjust the performance inside an engine.

The new wrench can make binding to the inside of the pillarene rings “about one hundred times stronger,” than it would be without the wrench, Schneebeli says. 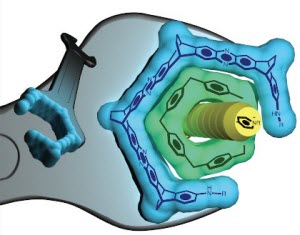 A blue wrench (of molecules) to adjust a green bolt (a pillarene ring) that binds a yellow chemical “guest.” It’s a new tool — just 1.7 nanometers wide — that could help scientists catalyze and create a host of useful new materials.Image courtesy of Severin SchneebeliAlso, “because this kind of molecule is rigid, we can model it in the computer and project how it looks before we synthesize it in the lab,” says UVM theoretical chemist Jianing Li, Schneebeli’s collaborator on the research and a co-author on the new study. Which is exactly what she did, creating detailed simulations of how the wrench would work, using computer processors in the Vermont Advanced Computing Core.

“This is a revolutionary idea,” Li said, “We have 100 percent control of the shape, which gives great atomic economy — and lets us know what will happen before we start synthesizing in the lab.”

In the lab, post-doctoral researcher and lead author Xiaoxi Liu, undergraduate Zackariah Weinert ’16, and other team members were guided by the computer simulations to test the actual chemistry. Using a mass spectrometer and an NMR spectrometer in the UVM chemistry department, the team was able to confirm Schneebeli’s idea.

Sir Fraser Stoddart, a world-leading chemist at Northwestern University, described the new study as, “Brilliant and elegant! Creative and simple.” And, indeed, it’s the simplicity of the approach that makes it powerful, Schneebeli says. “It’s all based on geometry that controls the symmetry of the molecules. This is the only shape it can take — which makes it very useful.”

Next, the team aims to modify the C-shaped pieces — which are tied together with two bonds formed between two nitrogens and bromines — to create other shapes. “We’re making a special kind of spiral which is going to be flexible like a real spring,” Schneebeli explains, but will hold its shape even under great stress.

“This helical shape could be super-strong and flexible. It could create new materials, perhaps for safer helmets or materials for space,” Schneebeli says. “In the big picture, this work points us toward synthetic materials with properties that, today, no material has."