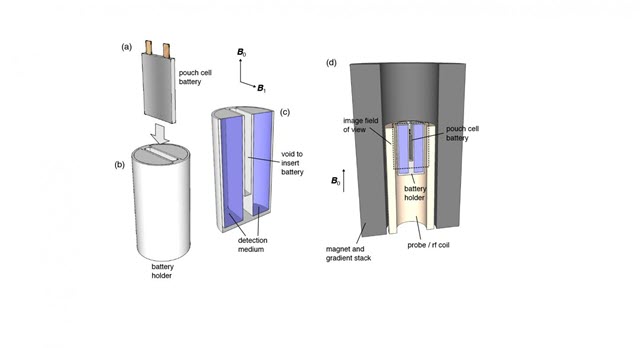 Above is an illustration of measurement setup showing the cell and the holder with the detection medium (water in this case), and (d) showing both inserted within the magnet bore of an NMR magnetCredit: Andrew Ilott and Alexej Jerschow

A team of chemists has developed an MRI-based technique that can quickly diagnose what ails certain types of batteries—from determining how much charge remains to detecting internal defects—without opening them up.

"The use of alternative energy and electrically powered vehicles will further increase the demand for better and safer batteries," observes Alexej Jerschow, a professor in New York University's Department of Chemistry, who led the research team. "However, there are currently only a very limited set of tools available to diagnose a battery's health without destroying the battery—our non-invasive technique offers a faster and more expansive method for making these assessments."

The work, described in the journal Nature Communications, also included Andrew Ilott, an NYU post-doctoral fellow at the time of the study and now a research investigator at Brisol-Myers Squibb; Mohaddese Mohammadi, an NYU doctoral candidate; and Christopher Schauerman and Matthew Ganter, research scientists at the Rochester Institute of Technology.

"Ensuring cell quality and safety is paramount to the manufacturing process that can save companies significant cost and prevent catastrophic cell failures from occurring," says Ganter, co-director of the RIT Battery Prototyping Center.

"This work not only supports the battery industry as a whole, but also the growing energy storage ecosystem in New York," adds Christopher Schauerman, co-director of the RIT Battery Prototyping Center.

The research focuses on rechargeable Lithium-ion (Li-ion) batteries, which are used in cell phones, laptops, and other electronics.

Notably, rechargeable batteries are at the heart of new technologies, including electric cars or storage for renewable energy sources.

However, recent malfunctions in hand-held devices and electric vehicles have highlighted the difficulties in designing batteries for these cutting-edge technologies. In addition, engineers often cannot determine the nature of defects or even impending battery failures without taking apart the device, which typically results in its destruction.

In general, magnetic resonance (MR) methods provide the ability to measure tiny changes in magnetic field maps and, as a result, create a picture of what lies inside a structure—for example, MRI (magnetic resonance imaging) can produce images of the human body's organs in a non-invasive manner.

In their experiments, they examined Li-ion batteries in different states--various levels of charge (i.e., battery life) and conditions (i.e., some damaged and others not). Such cells were prepared by collaborators at RIT's Battery Prototyping Center. With these cells, the NYU team was able to match magnetic field changes surrounding the batteries to different internal conditions, revealing state of charge and certain defects. These included bent and missing electrodes as well as small foreign objects in the cell, which are flaws that can occur during the normal manufacturing process.

"With future enhancements to this method, it could provide a powerful means of predicting battery failures and battery lifetimes as well as facilitate the development of next-generation high-performance, high-capacity, and long-lasting or fast-charging batteries," adds Jerschow.