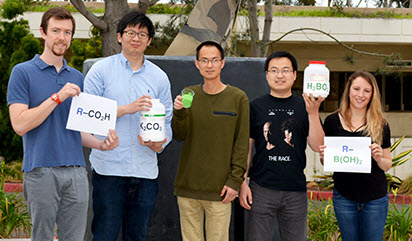 Co-authors of the study hold the ingredients to successfully carry out the new method. Left to right: David Peters, Ming Yan, Jie Wang, Chao Li, and Lisa Barton.Photo credit: Madeline McCurry-SchmidtLA JOLLA, CA — Chemists at The Scripps Research Institute (TSRI) have developed a broad and strikingly easy method for synthesizing a class of molecules that have demonstrated value as pharmaceuticals.

The difficulty of preparing these compounds—boronic acids and closely related molecules known as boronate esters—has greatly limited their use in the pharmaceutical industry, and to date there are only three FDA-approved drugs in this category.

With the new method, published this week as a First Release paper the journal Science, chemists can take abundant, inexpensive, structurally diverse compounds known as carboxylic acids and convert them easily into similarly structured boronic acids and related compounds.

“Carboxylic acids are the ideal starting material for synthesizing boronic acids, but until now there hasn’t been any method for getting from one to the other,” said principal investigator Phil S. Baran, Darlene Shiley Professor of Chemistry at TSRI.

Among the boronic acid-derived molecules Baran and his team made in demonstrating the new method were several novel compounds that are now being investigated further as potential treatments for COPD and other lung disorders.

The development of the new method, known as decarboxylative borylation, follows a breakthrough made a year ago when Baran and his team were studying a reaction commonly used in laboratory chemistry as well as in nature: the amide-bond forming reaction, which among other things, helps stitch amino acids into proteins. “We realized that the principles of amide bond formation, still the most utilized reaction in all of chemical synthesis, could be used to simplify a much broader set of molecule-building tasks,” Baran said.

In this case, the insight enables the transformation of virtually any carboxylic acid, whether simple or complex, using just a single reaction step and inexpensive nickel catalysts. The new method essentially replaces a key carbon atom on a carboxylic acid with a boron atom.

"Instead of devoting 95 percent of their effort to introducing a single boron atom, chemists can now easily install boron at any stage," Baran said.

Borylated versions of drug compounds should often have superior properties to their carboxylic acid counterparts. The new method for the first time makes it broadly practical for pharmaceutical chemists to create and investigate these borylated structures. To demonstrate, Baran and his team used the new method to make boronic acid versions of several common drugs, including Lipitor (atorvastatin) and vancomycin.

In a collaboration to demonstrate the translational utility of the discovery, Baran’s team and chemists from the California Institute for Biomedical Research (Calibr), also used the method to make boronic acid-based compounds that inhibit a human enzyme known as neutrophil elastase. Immune cells release this enzyme within the lungs during infections and other conditions involving lung inflammation. Elastase is considered a major cause of the lung damage seen in COPD, cystic fibrosis, and related respiratory ailments.

To date, elastase inhibitors developed through other methods have shown limited effectiveness and/or significant side effects, and so far none has been FDA-approved. However, the team found in initial lab-dish tests that their boronic acid-based compounds inhibit elastase more strongly than older elastase-inhibiting compounds. “We found that we could get a significant boost in potency by using a boronic acid group,” said study co-author Arnab Chatterjee, director of medicinal chemistry at Calibr.

These boronic acid-based compounds can bind very tightly to their target molecules but in a way that allows them to detach eventually, thus potentially reducing the impact of off-target interactions that cause unwanted side effects.

“The next step is to see how well these compounds perform in animal models,” said Chatterjee. “In general, this new method allows us in a practical way to get into this largely unexplored but promising chemical space of borylated compounds, and thus enables us to revisit old targets, such as elastase, that have largely resisted prior drug development efforts.”