HOUSTON, TX — December 3, 2020 — That carbon nanotubes fluoresce is no longer a surprise. Finding a second level of fluorescence is surprising and potentially useful.

How does it work? Wait for it.

The Rice University lab of Bruce Weisman, a professor of chemistry who led the pioneering discovery of nanotube fluorescence in 2002, found that single-walled nanotubes emit a delayed secondary fluorescence when triggered by a multistep process in a solution with dye molecules and dissolved oxygen.

The delay is only microseconds, but it's enough to be detected with some effort.

The complex process is detailed by Weisman, lead author and Rice alumnus Ching-Wei Lin, and research scientist Sergei Bachilo in the Journal of the American Chemical Society.

The reaction begins when light excites a solution containing a dye called rose bengal. Oxygen molecules dissolved in the solution capture energy from the dye, forming an energized form of O2. These then transfer their energy to nanotubes, where excitons—quasiparticles made of electrons and electron holes—are generated in their triplet state. With a bit of added thermal energy, those excitons get promoted to a higher energy singlet state that emits the observed fluorescence.

"For a number of years, we have been looking at interesting effects involving nanotubes and oxygen," Weisman said. "We've found quite a range of things that can happen, from physical effects like this energy transfer or the reversible quenching of fluorescence, to the triggering of chemical reactions between nanotubes and DNA. So this study was part of a larger program of exploration."

Their ability to excite dissolved oxygen molecules prompted the researchers to see how that would affect adjacent nanotubes, Weisman said.

"We make singlet oxygen by exciting a dye molecule with visible light, and then the oxygen deactivates the dye and gets excited itself," he said. "That idea goes back decades in photophysics and is very conventional. What's unusual here is that the singlet oxygen interacts with the nanotube to directly make triplet-state excitations in the tube. Those triplet states have been pretty elusive. 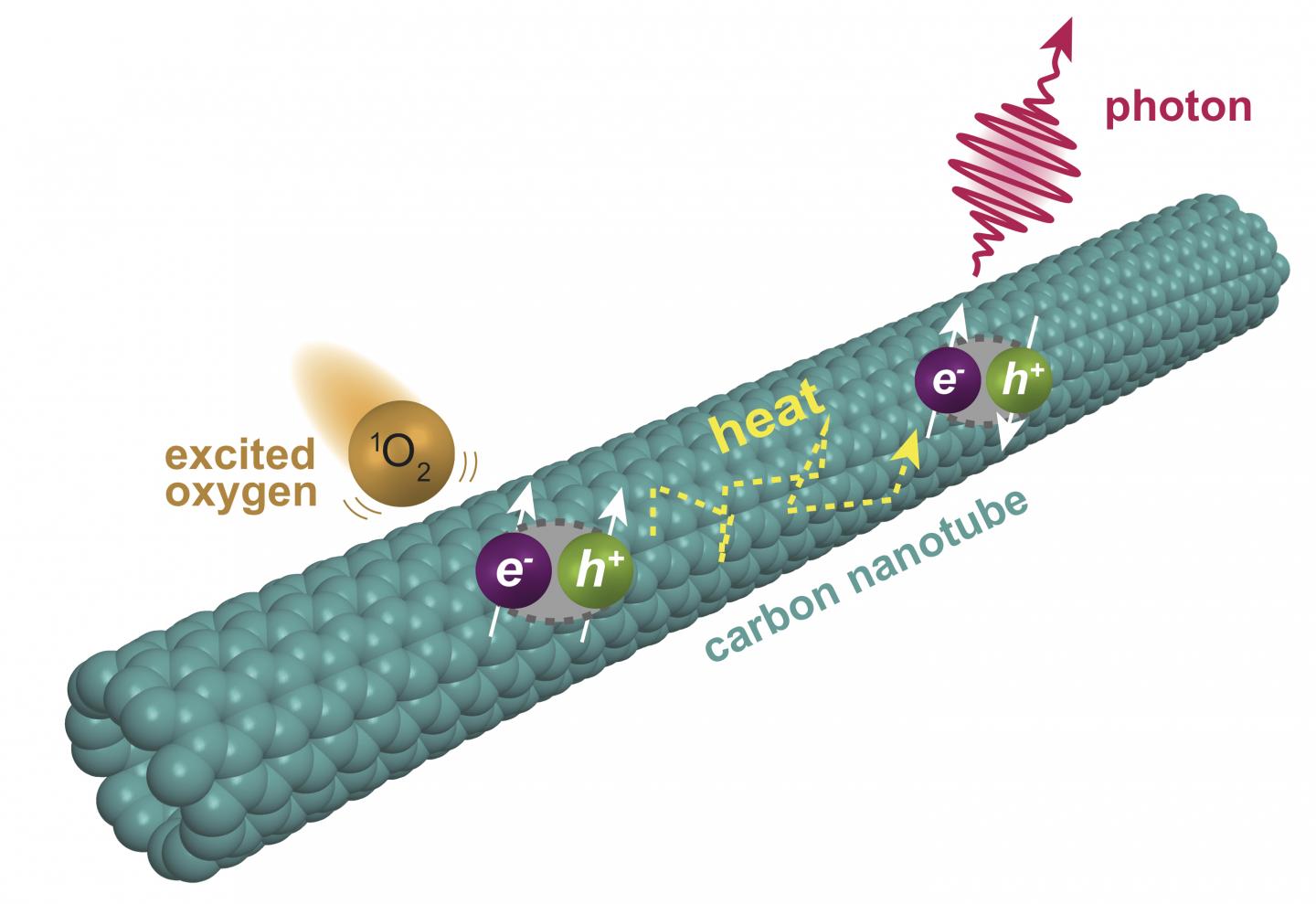 Chemists at Rice University have discovered a second level of fluorescence in single-walled carbon nanotubes. The fluorescence is triggered when oxygen molecules excited into a singlet state interact with nanotubes, prompting excitons to form triplet states that upconvert into fluorescing singlets.
Illustration by Ching-Wei Lin/Rice University

"Triplet states of organic molecules are the longest-lived excited states," Weisman said. "Their lifetimes are orders of magnitude greater than the singlet excited states, so they can hang around long enough to bump into something else and undergo chemical reactions.

"But because nanotube triplet states don't emit light or directly absorb light very well, they are tricky to study and not too much is known about them," he said. "What we've been doing is trying to understand them a little better."

Triggering fluorescence still required an extra step. "Just by random thermal agitation in their surroundings, these guys can sometimes get kicked up to the bright singlet state, and then they can tell you they're there by spitting out a photon," Weisman said.

Because the triplet state can last 10 microseconds or so, that upconverted emission is called delayed fluorescence.

The researchers had to find a way to detect the relatively weak effect amid the nanotubes' bright primary fluorescence. "It was like trying to see a dim object right after being blinded by a bright camera flash," Weisman said. "We had to devise some special instrumentation."

One device "is basically a fast mechanical shutter" that covers the short-wave infrared (SWIR) spectrometer during the bright flash and then quickly opens up, a kind of reverse camera that goes from covered to open in seven microseconds. The other device, he said, is a sensitive detector that's triggered with an electronic signal and measures how the weak emission fades away over time. "These systems were both built by Ching-Wei, who's a terrific experimentalist," he said.

Weisman and colleagues have employed nanotube fluorescence in medical imaging technologies and in nanotube-based smart skin to measure strain in surfaces, among other applications. He said the new discovery could eventually find its way into optoelectronics and solar energy.

"There's not a direct step where somebody's going to read this and make a new, more efficient device," Weisman said. "But this fundamental knowledge of processes and properties is the foundation on which new technologies are built."

- This press release was originally published on the Rice University website. It has been edited for style