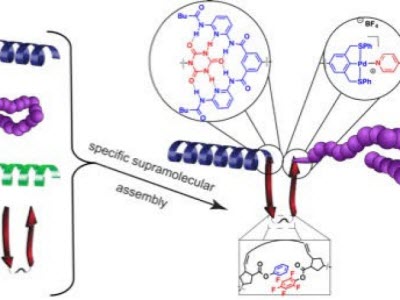 “Our methodology not only creates chain molecules that spur the creation of configurations similar to those in the natural world, but also promotes further assembly into more complex and compartmentalized systems,” explains Marcus Weck, a professor in NYU’s Department of Chemistry and the senior author of the paper, which appears in the Journal of the American Chemical Society. “These creations yield new knowledge of the folding process in nature as well as synthetic systems and, with it, the possibility to investigate misfolding, which is critical for a variety of diseases, including Alzheimer’s disease, Parkinson’s disease, and cystic fibrosis.”

Currently, the engineering of well-defined structures similar to those found in nature is beyond the reach of chemists. Primarily, this is because the orchestration of structures of enzymes, proteins, and DNA is a remarkably complex undertaking, which includes an array of cooperative processes across multiple domains.

Related Article: A New Way to Display the 3-D Structure of Molecules

To get closer to mimicking natural materials, the NYU researchers devised a means in which simple building blocks, or monomers, form more complex polymers that can fold into secondary structures such as helices, sheets, or random coils that are capable of further assembly into higher order three-dimensional structures, often referred to as a tertiary structure in proteins.

“While much work is dedicated to the engineering of bio-inspired synthetic folding systems that feature individual helical and sheet-like segments, our structures achieve design complexity while still maintaining simplistic routes to analyze assembled structures,” he adds.

The research was supported by a grant from the National Science Foundation (CHE-1506890) as well as by NSF’s Materials Research Science and Engineering Center (MRSEC) program (DMR-1420073).