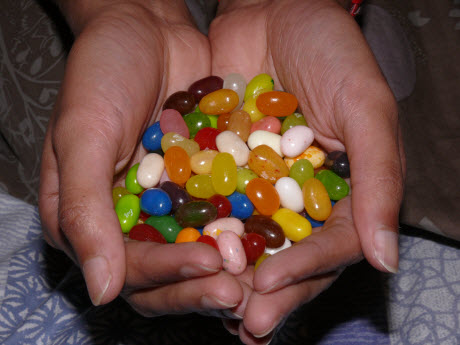 Researchers found that some children are 20 times better at detecting sugar than others.Photo credit: Andrew Gray, Wikimedia CommonsPHILADELPHIA (December 14, 2015) — Everyone knows that children love sweets, but ever wonder why some kids seem to want more sugary food than others? It could be because they need more sugar to get that same sweet taste. According to new research from the Monell Center, sensitivity to sweet taste varies widely across school-aged children and is in part genetically-determined. The findings may inform efforts to reduce sugar consumption and improve nutritional health of children.

“Some children are twenty times better at detecting sugar than others. As sugar becomes more restricted and even regulated in children’s diets, the less sugar-sensitive children may get less of a ‘sweet signal’ and therefore have a harder time dealing with sugar reduction,” said study author Danielle Reed, PhD, a behavioral geneticist at Monell.

In the study, published in the journal Nursing Research, the researchers determined the sweet taste threshold, defined as the lowest detectable level of sucrose, of 216 healthy children between the ages of 7 and 14. Each child was given two cups, one containing distilled water and the other containing a sugar solution and asked to indicate which contained a taste. This procedure was repeated across a wide range of sugar concentrations: the lowest concentration that the child could reliably distinguish from water was designated as that child’s sweet detection threshold (a lower taste threshold means the child is more sensitive to that taste).

Detection thresholds varied across a large range. The most sensitive child required the equivalent of only 0.005 teaspoon of sugar dissolved in a cup of water to detect sweetness, whereas the least sensitive needed three teaspoons to get the same sensation.

To explore genetic influences on sweet taste perception, DNA from 168 of the children was analyzed to identify variation in two sweet taste genes known to be related to sweet sensitivity in adults: the TAS1R3 G-coupled protein sweet receptor gene and the GNAT3 sweet receptor signaling gene. An additional analysis identified variation in the TAS2R38 bitter receptor gene, which is known to be related to individual differences in sweet preferences among children. Small changes in each of these genes are associated with differential sensitivity of the respective receptor to its activating taste stimuli.

Genotype analyses revealed that sucrose thresholds and sensitivity were related to variation in the bitter receptor gene, but not in the two sweet receptor genes. Specifically, children whose TAS2R38 receptor gene variants make them more bitter-sensitive were also more sensitive to sucrose.

Dietary records revealed that children having this same bitter-sensitive gene variant consume a higher percentage of their daily calories as added sugar.

“We were surprised to find that sweet taste sensitivity and sugar consumption were related to a bitter receptor gene. This will make us look harder at how we have cubby-holed taste genes into discrete categories and prompt us to explore whether sucrose and other sugars can directly activate bitter receptors,” said Reed.

Using bioelectrical impedance to measure body composition, the researchers also asked whether sweet sensitivity might relate to measures of obesity and were surprised to find that increased body fat was associated with greater sensitivity to sweet taste.

“Our assumption was that the more obese children would be insensitive to sugar and therefore would need higher concentrations to get the same pleasing effect as leaner children,” said paper lead author Paule Valery Joseph, PhD, who was a doctoral student at the University of Pennsylvania School of Nursing and Visiting Fellow at Monell at the time the paper was written. “This was not the case and to our surprise, children having more body fat were more sensitive to sugar and were able to detect a sweet taste at lower concentrations of sucrose.”

Moving forward, Joseph, a nurse-scientist who currently is a Clinical & Translational Postdoctoral Fellow at the National Institute of Nursing Research, would like to examine additional measures of dietary intake and body composition to achieve a clearer understanding of the potential relationships of taste, obesity and other metabolic conditions. She comments, “Better nutrition therapies are critically needed. Our ultimate goal is to bring the assessment from bench to bedside to create tailored interventions using ‘precision nutrition’ for both children and adults.”

Also contributing to the research was developmental psychobiologist Julie Mennella, PhD, of Monell. The work was supported by the National Institute of Deafness and Other Communication Disorders of the National Institutes of Health (NIH) under grants DC011287 and P30DC011735 to Monell and by grant T32NR007100 from the National Institute of Nursing Research of the NIH to the University of Pennsylvania School of Nursing. The content is solely the responsibility of the authors and does not necessarily represent the official views of NIH. Additional support came from the International Society of Nurses in Genetics and from an investigator initiated grant from Ajinomoto Co., Inc. The funding agencies had no role in the design and conduct of the study; in the collection, analysis, and interpretation of the data; or in the preparation or contents of the manuscript.