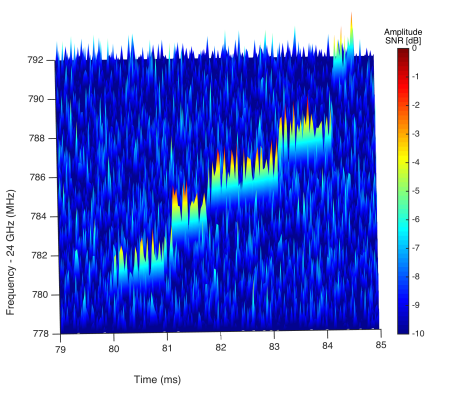 This spectrogram shows the first electron detected by the Project 8 collaboration. The horizontal axis is time, the vertical axis is frequency, and the color is power. Multiple separate "tracks" are seen because the electron scatters off of gas molecules and ends up emitting cyclotron radiation at slightly different frequencies; the slope of each track indicates that the electron is losing energy to the cyclotron radiation.Image courtesy of the Pacific Northwest National LaboratoryRICHLAND, Wash. – A year before Albert Einstein came up with the special theory of relativity, or E=mc2, physicists predicted the existence of something else: cyclotron radiation. Scientists predicted this radiation to be given off by electrons whirling around in a circle while trapped in a magnetic field. Over the last century, scientists have observed this radiation from large ensembles of electrons but never from individual ones.

A group of almost 30 scientists and engineers from six research institutions reported the direct detection of cyclotron radiation from individual electrons April 20 in Physical Review Letters. They used a specially developed spectroscopic method that allowed them to measure the energy of electrons, one single electron at a time.

Besides the excitement of actually detecting this radiation from a single fundamental charged particle — the electron — the method provides a new way to potentially measure the mass of the neutrino, a subatomic particle that weighs at most two-billionths of a proton.

"One of the biggest problems in physics today is the unknown mass of the neutrino," said physicist Brent VanDevender, lead scientist from the Department of Energy's Pacific Northwest National Laboratory. "The universe is full of neutrinos. There are so many of them that it matters how much they weigh. Even at two-billionths of a proton mass they would outweigh all of the other normal matter in the universe like stars, planets and dust, and affect the formation of large-scale structures like galaxy clusters."

Physicists are trying to understand some of the smallest parts of the universe. Typical atoms — which make up all matter — contain a nucleus surrounded by a cloud of electrons. The nucleus holds positively charged particles called protons and inert particles called neutrons, which give the atom heft. Electrons are negatively charged and zip around the nucleus.

These particles might appear unrelated, but the inert neutrons sometimes turn into protons in what is called beta decay. The proton stays behind while an electron and a neutral bit called a neutrino zip away into the universe.

Because they are so small and carry no charge, neutrinos are hard to measure. Currently, scientists have determined the heaviest a neutrino can be. Comparing the mass of a neutrino to a neutron would be like comparing a toddler to the Great Pyramid of Giza.

There are several efforts currently under way to detect and measure the neutrino mass directly, such as the KATRIN nuclear physics experiment in Germany. These efforts are huge, enlisting hundreds of researchers and building analytical instruments the size of a large house. Even so, there's a chance that the neutrino will be too small to be detected by such experiments.

About five years ago, two of the co-authors on this study proposed that perhaps instead of detecting neutrinos, or even electrons directly, they could come at the problem sideways by measuring electrons' cyclotron radiation, which can reveal an electron's energy.

If they measure, with enough precision, electrons emitted when a hydrogen carrying two extra neutrons — a tritium atom — beta decays to helium-3, they could infer the mass of a neutrino by adding up the energies of the helium-3 and an electron, and comparing that to a tritium atom. If they don't add up to a whole tritium atom, the difference must be the neutrino mass.

Measuring mass with energy? Yes, thanks to Einstein and special relativity. Because mass and energy are related, the team can measure the energy of electrons and get at mass that way. Gathering a few dozen collaborators into Project 8, the team developed a new method called Cyclotron Radiation Emission Spectroscopy to do so, and demonstrated it in this study.

The instrument the team developed stands about as tall as a few wine barrels stacked on top of each other, much smaller than a house. To maximize their odds of success, they started with the best possible conditions. They chose an atom that would give them clean and easy to read spectroscopic information. That atom, a form of krypton called metastable krypton-83 (or 83mKr), would decay and give them lots of electrons that they could capture in their magnetic field.

As they trapped single electrons in the field, they measured how fast they zipped around in a circle, which led them to the electron energy. The energy they measured for the krypton electrons came in at the expected 30.4 kilo-electron-volts. Their precision was within 0.05 percent of the target — not tight enough to infer neutrinos, but a very good start.

"Neutrino mass is tiny so the spectroscopy has to be exquisite. We have to do about 10 times better in the end," said VanDevender.

They didn't expect enough precision to measure the neutrino in this prototype experiment, he said, so the most exciting result for now was detecting cyclotron radiation.

"Nobody ever really doubted its existence, but it is still cool to be the first to observe a basic phenomenon of nature. This is a prediction that has been hanging out there since 1904 and it took 110 years for somebody to confirm at the level of individual fundamental particles," said VanDevender.

VanDevender predicted it will take another decade to get a measurement for the neutrino mass, and it's possible KATRIN might weigh it first. The next step is to repeat the krypton experiments they did with tritium.

Once they've mastered that, they will have to figure out how to scale up to accommodate more tritium in much larger volumes to get the information they need to determine the neutrino mass.

This work was supported by the Department of Energy Office of Science, University of Washington Royalty Research Foundation, the Massachusetts Institute of Technology Wade Fellowship, the National Science Foundation and PNNL.