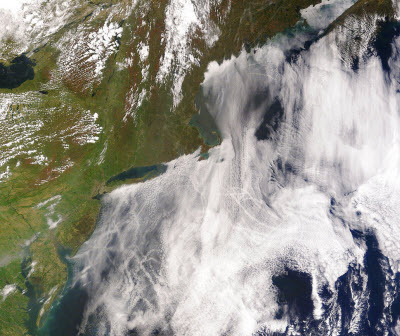 Satellite image of ship tracks, clouds created by the exhaust of ship smokestacks.Liam Gumley, Space Science and Engineering Center, University of Wisconsin-Madison, via Wikimedia CommonsIn the December issue of Nature Climate Change, Jonathon Schuldt, assistant professor of communication, argues that only by creating a “science of climate diversity” can climate science and the larger climate change movement overcome a crippling lack of ethnic and racial diversity.

“There is an invisible, but very real barrier to climate engagement,” Schuldt said. “We need to engage with all kinds of diverse folks if we’re going to face this challenge. It will be a problem if the perception, and the reality, is that it’s a bunch of white male scientists at the table.”

The commentary, “Facing the diversity crisis on climate science,” was born when Schuldt and co-author Adam Pearson, an assistant professor of psychology at Pomona College, began talking about University of Michigan Professor Dorceta Taylor report, “The State of Diversity in Environmental Organizations.” In the report, Taylor examined non-profits, government agencies and grant-making foundations and found that non-white minorities comprised no more than 16 percent of staff in these institutions, in spite of constituting 29 percent of the U.S. science and engineering workforce and 38 percent of the American population. The report found that this “white Green Insiders club” narrows research and limits public engagement.

“What is missing is science-based solutions that focus on the fundamentally social nature of this problem,” the authors state. “Research from social psychology offers insight into factors that can powerfully influence participation.”

Schuldt and Pearson argue that early successes in diversifying other STEM research fields, and expanding the role women play in the environmental movement, point to three immediate and essential steps for climate research and outreach organizations.

First, boosting racial and ethnic diversity in climate research and outreach leadership can have an instant impact – provided this leadership is represented in how institutions present themselves. Put simply, Schuldt said, climate science “needs to present a more diverse face.”

Next, the authors urge all those who communicate around climate science to confront lingering stereotypes about environmentalism and minority engagement. Schuldt said one of the most pernicious fallacies needs to quickly be dismantled: that concern for climate issues is lacking in America’s non-white population. He notes recent work by social science researchers has shown this “underrepresentation by choice” idea to be false, and said climate leaders need to highlight the reality of deep minority community concern.

Lastly, the authors insist organizational messages can help bridge this gap. Among the most destructive ideas that needs to be abandoned, Schuldt said, is that communication around climate science should be “color blind.”

“Color-blind communications are, paradoxically, ineffective,” Schuldt said. “What it implies to minority individuals is that their unique perspectives and experiences don’t matter.”

Instead, Schuldt suggested, messages that highlight diversity while pointing toward a common goal are key: “We are all different, but we’re all in this together.”

The long-range goal, Schuldt and Pearson state, needs to be the creation of a new science of climate diversity. Climate scientists must collaborate with psychology and the social sciences, and these research partnerships need to be supported by academic, public and private institutions alike. Once that is done and a “new nexus of research” begins to form around how climate science and the climate change movement can increase racial and ethnic diversity, those fact-based findings can be used to guide public climate advocacy and policy reform efforts. That, Schuldt said, is the only way a problem as complex and far-reaching as climate change can effectively, and equitably, be addressed.

“Diverse teams are better at solving complex problems, and there’s every reason to believe this is the same, if not more important, when facing climate change,” Schuldt said.