If warming continues unabated in the Midwest, in 50 years we can expect the best conditions for corn and soybean production to have shifted from Iowa and Illinois to Minnesota and the Dakotas, according to Penn State researchers.

Using machine learning—a form of artificial intelligence that enables a computer system to learn from data—the team considered more than three decades of county-level, crop-yield data from the US Department of Agriculture's National Agricultural Statistics Service for 18 states in the central region of the United States. That area produces the majority of these crops.

The researchers evaluated crop yields along with weather data. They considered fundamental climate variables to find yield predictors specific to each of the crop-growing phases. The study also analyzed the relationships between climate and corn, sorghum, and soybean grain yield from 1980 to 2016. 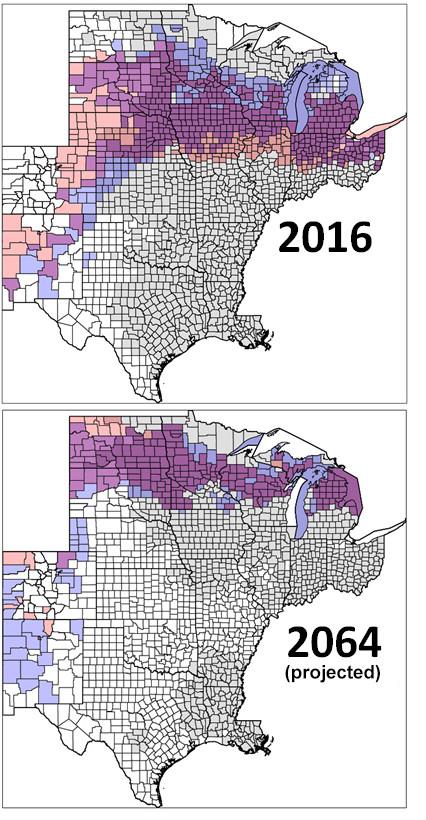 The graphic shows the overlay of precipitation and temperature color coded to represent the best locations for corn in 2016 and in a climate scenario representative of 2064 if emissions are not curtailed. The darkest shade of purple is where temperature and precipitation align to provide the best weather for corn—for example, from northern Ohio all the way west through parts of Indiana, Michigan, Illinois, and Iowa, among other states. In the projected 2060 panel, the best combination of precipitation and temperature become narrower and move north from current conditions.
Kemanian Research Group, Penn State

"This kind of research was impossible before the era of big data we are living in now, and of course, it can be done only by using the powerful computing capacity that we can access at Penn State," said researcher Armen Kemanian, associate professor of production systems and modeling in the College of Agricultural Sciences. "This study is important because in a climate that is changing relatively quickly, these techniques allow us to foresee what may happen."

The findings, published in Environmental Research Letters, do not necessarily mean that the shift north and west in corn and soybean production will occur, said lead researcher Alexis Hoffman, who earned her doctoral degree in meteorology at Penn State in 2018. But, based on the data, researchers conclude that such a shift is in progress, and there is a strong probability it will continue.

"We are not suggesting that such a shift would be a catastrophe," Kemanian said. "It doesn't mean that Iowa will stop producing crops, but it might mean that Iowa farmers adapt to a warmer climate producing two crops in a year or a different mix of crops instead of the dominant corn-soybean rotation. The changes are likely to be gradual, and farmers and the supply chain should be able to adapt. But things will change."

The three crops in the study have distinct responses to humidity and temperature, one of the most revealing results of the study, noted Hoffman. In general, corn needs more humidity, sorghum tolerates higher temperatures, and soybean is somewhere in between.

For each year during the study period, researchers estimated planting dates for every county, based on county-level temperatures to simulate farmer adaptation to cold or warm years, she said. They estimated that planting occurs once the 21-day moving average rises to a crop-specific threshold temperature. Planting temperatures for corn, sorghum, and soybean were 50, 59, and 53.6 degrees Fahrenheit, respectively. 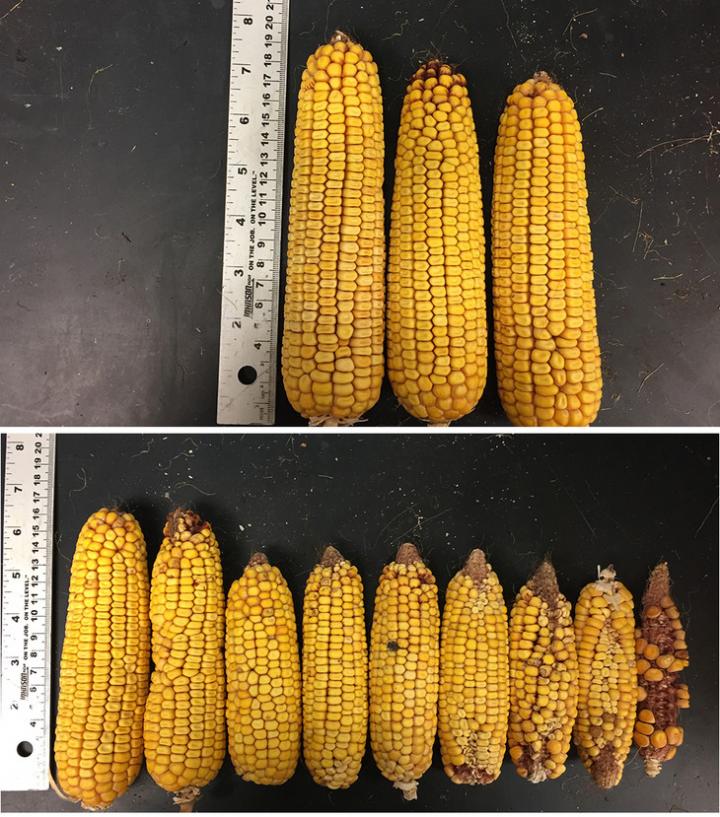 Corn exhibited a uniquely strong response of increased yield to increasing atmospheric humidity during its critical phase, from before to after flowering, as well as a strong sensitivity to exposure to extreme temperatures, Hoffman explained.

"Humidity is a factor for all crops studied, but what the data are telling us is that it is more of a factor for corn than it is for soybean or sorghum, and in a very narrow time window," she said. "And by humidity, we mean that soils might be moist, but the data is showing that moisture in the air matters, regardless. That wasn't known before."

However, soybean has a strong response to both maximum and minimum temperatures, she said. "All crops had threshold-like responses to high temperature, though we documented a comparatively greater tolerance to high temperature for sorghum at 90.5 F versus a range of 84.2 to 86 F for corn and soybean. We did not describe that response—machine learning revealed it for us."

The research may have implications for companies selling crop insurance, Kemanian suggests.

"High-temperature swings are damaging. Learning when and by how much for both corn and soybean is critically important," he said. "Crop insurance companies have an interest in this because they need to assess the risk of a given stress happening and how much they will pay as a result."

Chris Forest, professor of earth and mineral sciences, Hoffman's doctoral degree adviser was involved in the research. This research builds on earlier work done by Hoffman and the team in sub-Saharan Africa.