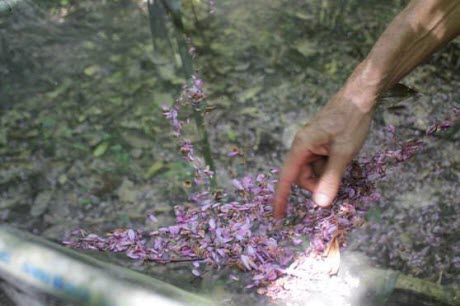 The findings were outlined in a paper published in the journal Global Change Biology.

"It's really remarkable," said Assistant Professor of Geography Stephanie Pau, who led the study. "Over the past several decades, we've seen temperatures warming and carbon dioxide increasing, and our study found that this tropical forest has responded to that increase by producing more flowers."

Pau's findings suggest that tropical forests, which have evolved over millennia to flourish in warm, equatorial conditions, may be more sensitive to subtle climatic changes than some ecologists predicted.

"Tropical forests have evolved in generally stable climates," Pau said. "So while they may not be warming as much as some higher-latitude ecosystems, these tropical species appear to be much more sensitive than we might have expected."

For this study, Pau evaluated a record of plant material collected and archived by researchers on the island over 28 years. She and her colleagues then examined how a host of climatic drivers–temperature, rainfall, light and carbon dioxide–appeared to affect the annual flowering activity and flowering duration of the different species present in the forest.

During her investigation, one factor stood out among the rest.

"What we were able to do in this paper is ask why flower activity has been increasing over the long term," Pau said. "We found that atmospheric carbon dioxide clearly seems to have had the largest effect on the increase in flowers."

Plants convert atmospheric carbon dioxide into energy in the form of sugars, which they can use to fuel any number of vital life processes. As more carbon dioxide is released into the atmosphere, plants have an opportunity to produce a bounty of new energy.

The dramatic, long-term rise in flowering indicates that the forests of Barro Colorado Island are allocating those swelling stores of energy toward increased reproductive activity.

However, while some species have continued to exhibit elevating rates of flower activity in response to higher concentrations of carbon dioxide, others, like certain canopy trees and lianas, have shown more stabilized flowering in recent years.

"Tropical species may generally be more sensitive than we expected, but not all species are responding the same," Pau said. "For some species, responses to increasing carbon dioxide seems to have reached a ceiling. These are the kinds of trends that we can only identify with long-term records like the one used in our research."

"These tropical species have evolved in warm regions, so there may be an expectation that climate change won't affect them," Pau said. "But what we've shown is that they are in fact extremely sensitive to even small changes in their climate."