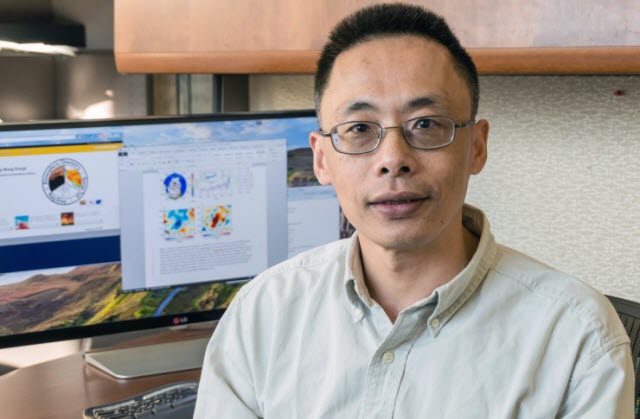 Yuhang Wang, a professor in the School of Earth and Atmospheric Sciences at the Georgia Institute of Technology, led a study of how extreme weather associated with climate change may extend the ozone season in the Southeast United States.Photo Credit: Georgia Tech

Extreme weather conditions associated with climate change may extend the ozone season in the Southeastern United States as drought-stressed trees emit more of the precursor compound that helps form the health-threatening pollutant. July and August have traditionally been peak ozone months, but a new study suggests those peaks could extend well into the fall as weather becomes warmer and drier.

In 2010, regional ozone levels reached a peak in October, with higher levels of the pollutant than in July, providing a preview of what may happen as the climate changes. Ironically, the projected extension of ozone season comes at a time when summertime ground-level ozone levels continue to decline as a result of emission reductions mandated by the Clean Air Act.

“This study shows that our air quality, particularly ozone in the fall, is becoming more sensitive to the effects of climate change,” said Yuhang Wang, a professor in the School of Earth and Atmospheric Sciences at the Georgia Institute of Technology. “The direction of climate change is such that we are likely going to see hotter and drier fall seasons, which may create larger ozone extremes in the Southeast. We are likely to have record ozone days in the fall, and we need to prepare for that.”

The research, which was sponsored by the US Environmental Protection Agency’s Science To Achieve Results (STAR) Program, was reported Aug. 22 in Early Edition of the journal Proceedings of the National Academy of Sciences. The paper is believed to be the first to connect variations in ground-level ozone concentrations to the drought stress on trees.

Ozone is formed in the atmosphere by chemical reactions of nitrogen oxides (NOx) and volatile organic compounds (VOCs) in the presence of sunlight. VOCs are emitted by vehicles, industrial sources and trees, while NOx emissions mainly originate with human-created sources. Because of its large forests, the Southeast is more impacted by natural VOC emissions than other parts of the country.

Ozone can harm the lungs of susceptible people, especially the elderly and very young, and stunt the growth of agricultural crops. During the summer, residents of the Southeastern US are often asked to reduce emission of VOCs—such as refueling vehicles in the morning or evening—to reduce ozone formation. And sensitive individuals are asked to remain indoors when ozone levels peak.

Wang and graduate student Yuzhong Zhang studied ozone and precursor emission data compiled over the past 35 years for the Southeastern states, focusing their detailed modeling on 2008, 2009, and 2010. In two separate years, both since 2000, they identified unexpected ozone peaks during the month of October—and found that those peaks corresponded to spikes in the level of isoprene, a compound emitted by trees.

Though the biochemical cause has not been thoroughly studied, research shows that trees emit more isoprene when they are under stress from heat and drought. In 2010, a summertime drought worsened in October, boosting isoprene emissions to levels substantially higher than in 2008 and 2009.

Related Article: Climate Tipping Points: What Do They Mean for Society?

Climate modeling suggests that over the next several decades, the Southeast will experience more periods of weather variability, with hot and dry conditions favorable to isoprene emission from trees becoming more likely.

In October in the Southeast, ozone levels have averaged about 40 parts per billion (ppb). But in 2010, monitoring stations reported exceedances over the 70 ppb limit 324 times—as measured at 112 locations. In 2008 and 2009, ozone exceedances were rare during October.

Modeling by the researchers suggests that isoprene emission from trees is more sensitive to the air-plant moisture difference than to temperature. The researchers used a measure called vapor pressure deficit—tied to a combination of relative humidity and temperature—to predict emission of isoprene. The vapor pressure deficit describes the level of drought stress on trees, Wang said.

If fall ozone peaks become more common, as the study suggests, ozone mitigation activities may have to be extended into the fall to protect humans against the pollutant.

“We will need more public awareness of the problem, and in particular, we will need the organizations that are involved in public awareness and public warning to know what’s coming and be prepared for these extreme conditions,” Wang said. “This could have a significant effect on people living in the Southeastern United States.”

This work was supported by the US EPA Science To Achieve Results (STAR) Programs through grant RD-83520401. It has not been subjected to any EPA review and therefore does not necessarily reflect the views of the Agency, and no official endorsement should be inferred.