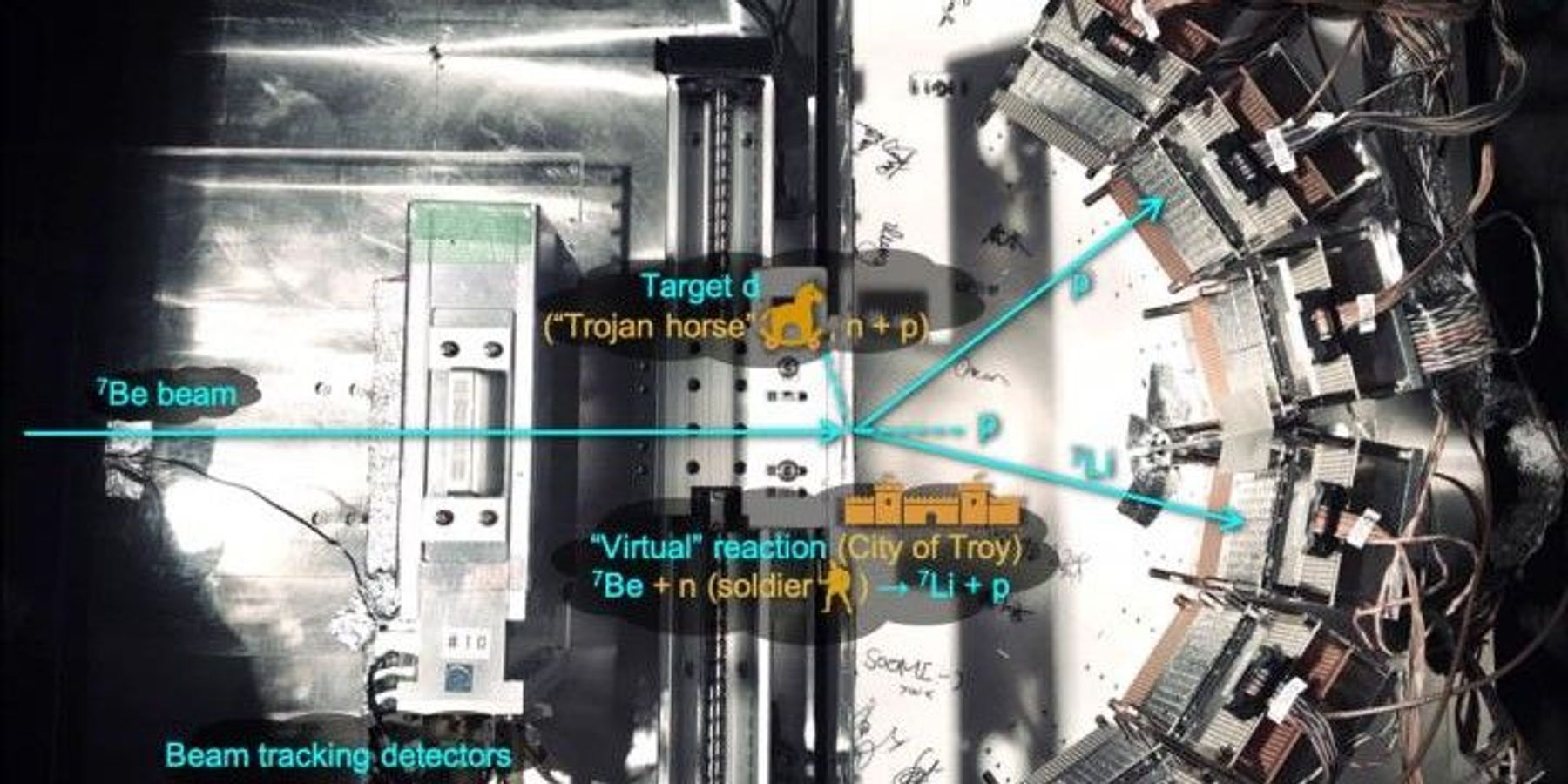 As a beam of beryllium comes in from the left, the deuteron Trojan horse intercepts it at the target and delivers its neutron soldier. This allows the decay products of the beryllium and neutron reactions to be captured by a curved array of six detectors on the right.
2021 Hayakawa et al.

There is a significant discrepancy between theoretical and observed amounts of lithium in our universe. This is known as the cosmological lithium problem, and it has plagued cosmologists for decades. Now, researchers have reduced this discrepancy by around 10 percent, thanks to a new experiment on the nuclear processes responsible for the creation of lithium. This research could point the way to a more complete understanding of the early universe.

There is a famous saying that, "In theory, theory and practice are the same. In practice, they are not." This holds true in every academic domain, but it's especially common in cosmology, the study of the entire universe, where what we think we should see and what we really see doesn't always match up. This is largely because many cosmological phenomena are difficult to study due to inaccessibility. Cosmological phenomena are usually out of our reach because of the extreme distances involved, or often they have occurred before the human brain had even evolved to worry about them in the first place—such is the case with the big bang.

Project assistant professor Seiya Hayakawa and lecturer Hidetoshi Yamaguchi from the Center for Nuclear Study at the University of Tokyo, and their international team are especially interested in one area of cosmology where theory and observation are very misaligned, and that is the issue of the missing lithium, the cosmological lithium problem (CLP). In a nutshell, theory predicts that in the minutes following the big bang that created all matter in the cosmos, there should be an abundance of lithium around three times greater than what we actually observe. But Hayakawa and his team accounted for some of this discrepancy and have thus paved the way for research that may one day resolve it entirely.

"13.7 billion years ago, as matter coalesced from the energy of the big bang, common light elements we all recognize—hydrogen, helium, lithium, and beryllium—formed in a process we call Big Bang nucleosynthesis (BBN)," said Hayakawa. "However, BBN is not a straightforward chain of events where one thing becomes another in sequence; it is actually a complex web of processes where a jumble of protons and neutrons builds up atomic nuclei, and some of these decay into other nuclei. For example, the abundance of one form of lithium, or isotope—lithium-7—mostly results from the production and decay of beryllium-7. But it has either been overestimated in theory, underobserved in reality, or a combination of the two. This needs to be resolved in order to really understand what took place way back then."

Lithium-7 is the most common isotope of lithium, accounting for 92.5 percent of all observed. However, even though the accepted models of BBN predict the relative amounts of all elements involved in BBN with extreme accuracy, the expected amount of lithium-7 is around three times greater than what is actually observed. This means there is a gap in our knowledge about the formation of the early universe. There are several theoretical and observational approaches that aim to resolve this, but Hayakawa and his team simulated conditions during BBN using particle beams, detectors, and an observational method known as the Trojan horse.

"We scrutinized more than ever before one of the BBN reactions, where beryllium-7 and a neutron decay into lithium-7 and a proton. The resulting levels of lithium-7 abundance were slightly lower than anticipated, about 10 percent lower," said Hayakawa. "This is a very difficult reaction to observe since beryllium-7 and neutrons are unstable. So we used deuteron, a hydrogen nucleus with an extra neutron, as a vessel to smuggle a neutron into a beryllium-7 beam without disturbing it. This is a unique technique, developed by an Italian group we collaborate with, in which the deuteron is like the Trojan horse in Greek myth, and the neutron is the soldier who sneaks into the impregnable city of Troy without tipping off the guards (destabilizing the sample). Thanks to the new experimental result, we can offer future theoretical researchers a slightly less daunting task when trying to resolve the CLP."