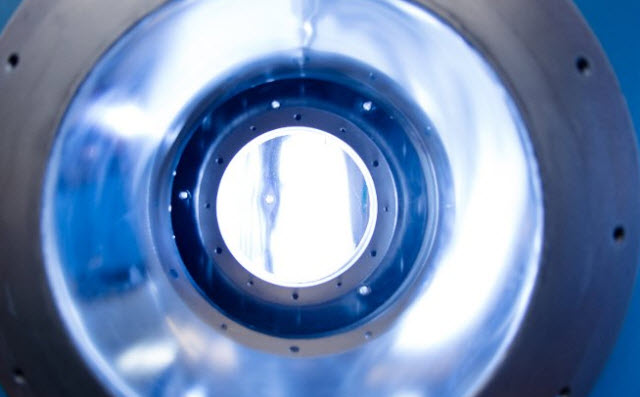 Research from Michigan Tech's cloud chamber shows that clouds with fewer aerosol particles have a wider variability in droplet size, with some large enough to be considered drizzle drops.Photo courtesy of Michigan Tech

When it comes to climate change, clouds are the wild card. Atmospheric physicists at Michigan Tech use a turbulence-generating cloud chamber to better understand the details and droplets.

There are few absolutes in life, but Will Cantrell—professor of physics at Michigan Technological University—says this is one: “Every cloud droplet in Earth’s atmosphere formed on a preexisting aerosol particle.”

And the way those droplets form—with scarce or plentiful aerosol particles—could have serious implications for weather and climate change.

Related Article: How Clouds Get Their Brightness

It’s been known for decades that cleaner clouds tend to have bigger cloud droplets. But through research conducted in Michigan Tech’s cloud chamber, which was published Nov. 28 by Proceedings of the National Academy of Sciences (DOI: http://www.pnas.org/content/early/2016/11/22/1612686113.full), Cantrell, graduate student Kamal Kant Chandrakar, fellow physics professor Raymond Shaw, and colleagues found that cleaner clouds also have a much wider variability in droplet size. So wide, in fact, that some are large enough to be considered drizzle drops.

Dirtier clouds, Shaw explains, not only have smaller droplets, but also much more uniformity in droplet size, with no observable drizzle drops.

“If clouds have more aerosols in them, the drops would be smaller and more similar in size,” Shaw says. “It would be harder for the cloud to rain, and the cloud would then last longer. If a cloud rains, or has less water in it, it won’t be there to reflect sunlight.”

For many people, the word aerosol conjures up images of Aqua Net hairspray or household air fresheners. But an aerosol is simply any solid or liquid that’s suspended in gas or liquid.

To figure it out, they went to the cloud chamber and created two kinds of clouds—very polluted clouds and very clean ones. Imagine the available water in these clouds as a piñata full of candy, and all the aerosols are kids. If there are a lot of kids in the room, it’s more likely that most will get a piece of candy; if only ten percent of the kids are there, then only a few—the fast or lucky ones—will scoop up most of the good stuff. Aerosols compete in the same way for water vapor: more aerosols result in smaller drops with a more even distribution, and fewer aerosols create larger drops with uneven distribution.

But there’s another key element to consider: turbulence. The spraying and bounding candy released from the piñata is like the water vapor in a real cloud that’s continuously mixed and swirled by turbulence. Sometimes the turbulence creates a “spike” of high water vapor. In a polluted cloud, lots of droplets are there to gobble the water vapor up. In a clean cloud, the same spike of high water vapor could last a long time with only a few fortunate droplets in the vapor’s vicinity to munch plentifully and grow much bigger than their neighbors.

"In a heterogeneous spread of droplet sizes, the cloud droplets are more likely to turn into rain droplets, because they’re more likely to collide," Cantrell explains, adding that different-sized droplets fall at different speeds because of Earth's atmosphere. "When rain droplets fall, their speed is governed by a balance between gravity pulling them down and drag holding them back. While every raindrop falls at terminal speed, the bigger drops fall faster."

There are many sources of aerosol emission. Anyone who’s been to a megacity knows the orange haze of aerosols that often hangs in the air. Scientists have good reason to expect that those massive emissions of aerosols could change the brightness of clouds and how efficiently clouds rain. The Michigan Tech study reinforces that dirtier clouds—which are brighter clouds that scatter more sunlight, reflecting some of it back to space—will probably last longer because they are less likely to lead to precipitation.

“Clouds are the big wild card,” Shaw says. “We’re looking at clouds as one part of a large climate system. Like all the interlinked parts of the system, clouds tend to respond to changes in the system. But how will they respond? Will they counteract a lot of the carbon dioxide effect or just a little?” 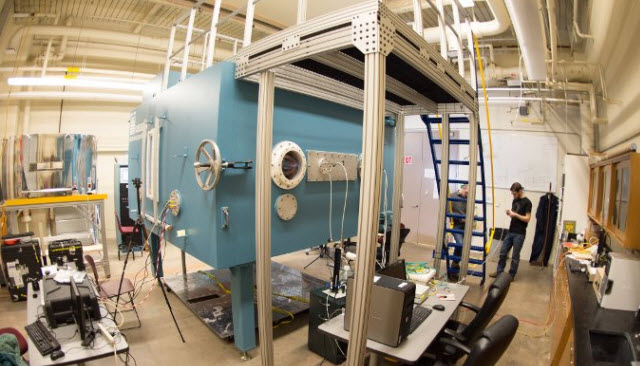 Studying clouds in nature is notoriously difficult. Researchers have to take what they can get on any given day, and nothing is constant. In the cloud chamber, however, Shaw and Cantrell can control what are called thermodynamic and microphysical variables—the temperature, pressure, aerosol quantity, and water vapor.

What makes the Michigan Tech cloud chamber different from any other is that the cloud inside is turbulent, and researchers can keep a cloud for as long as they want, so long as they keep feeding it aerosols. In other chambers, clouds are more static and only last for a matter of minutes. The Michigan Tech chamber works differently due to cloud mixing between a hot and cold surface, the same process that forms clouds or fog over a lake on fall days when the water temperature is warmer than the air temperature. 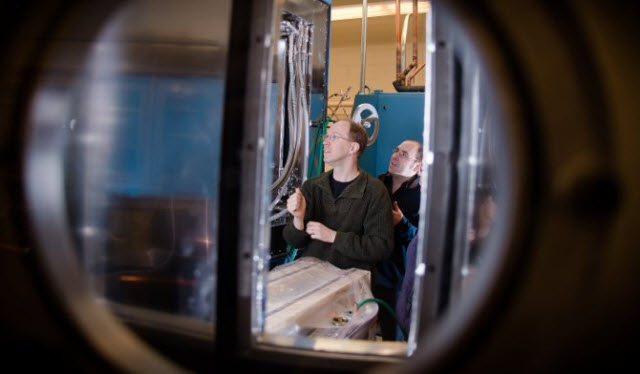 The Michigan Tech chamber creates clouds through cloud mixing between a hot and cold surface—the same process that forms fog over Portage Lake on fall days when the water temperature is warmer than the air temperature.Photo courtesy of Michigan Tech

Out of the Box

Shaw notes that the strength of the cloud chamber research is also its limitation.

“The strength is that we can control everything,” Shaw says, “but the atmosphere is full of feedbacks—you change one thing, and ten other things respond, sometimes in ways you don’t understand.”

The cloud chamber eliminates many of those feedbacks, and researchers gain an understanding of what happens when conditions are constant. But nature is never constant, so one of the next steps is to take the research to the skies.

Shaw and colleagues have collaborated with the National Center for Atmospheric Research (NCAR) and the Institute for Tropospheric Research in Germany to use their airborne laboratories to study clouds, and they may now be able to test size and distribution phenomena in real clouds. The researchers also plan to continue collaborating with the Pacific Northwest National Laboratory to continue vetting their atmospheric model using cloud chamber simulations and controls.

For now, growing human-made clouds provides insight only available through the team's specialized cloud chamber. The more researchers understand inside the cloud chamber, the better atmospheric scientists can apply this knowledge outside the box.

Simulating Sneezes and Coughs to Show How COVID-19 Spreads

Simulating Sneezes and Coughs to Show How COVID-19 Spreads