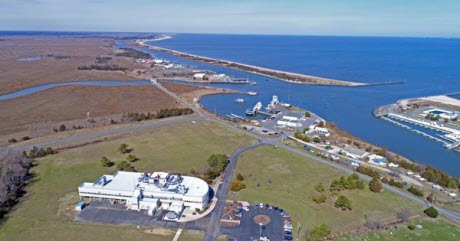 An aerial view of the coast near University of Delaware's Hugh R Sharp campus in Lewes.Photo by University of Delaware Robotics Discovery LabAs we chug down the road in our cars and inch the thermostat upward to warm our homes in winter, carbon dioxide is released into the air. This has been happening since the Industrial Revolution.

As more carbon dioxide enters the atmosphere, the global ocean soaks up much of the excess, storing roughly 30 percent of the carbon dioxide emissions coming from human activities. In this sense, the ocean has acted as a buffer to slow down the greenhouse gas accumulation in the atmosphere and, thus, global warming. However, this process also increases the acidity of seawater and can affect the health of marine organisms and the ocean ecosystem.

New research by University of Delaware oceanographer Wei-Jun Cai and colleagues at Université Libre de Bruxelles, Texas A&M University-Corpus Christi, University of Hawaii at Manoa, and ETH Zurich, now reveals that the water over the continental shelves is shouldering a larger portion of the load, taking up more and more of this atmospheric carbon dioxide.

The study findings, published in Nature Communications on Wednesday, Jan. 31, may have important implications for scientists focused on understanding the global carbon budget.

Understanding how carbon flows between land, air and water is key to predicting how much greenhouse gas emissions the earth, atmosphere and ocean can tolerate over a given time period to keep global warming and climate change at thresholds considered tolerable.

“This is because the coastal ocean is shallower than the open ocean and can quickly transfer sequestered carbon dioxide to the deep ocean; this process creates an additional and effective pathway for the ocean to take up and store anthropogenic carbon dioxide,” said Cai, the Mary A.S. Lighthipe Professor in the College of Earth, Ocean, and Environment.

Though relatively small in comparison to the open ocean, the coastal zones are where an extremely large amount of the carbon dioxide is exchanged between air and water.

“If this conclusion is confirmed by future observations, it would mean that the coastal ocean will become more and more efficient at removing carbon dioxide from the atmosphere,” said Goulven Lurallue, the paper’s lead author and a researcher with Université Libre de Bruxelles in Belgium.

Until recently, these trends were extremely difficult to calculate due to a lack of data about carbon dioxide in coastal waters. Complicating matters further, coastal zones behave differently depending of their location and topography. For example, in higher latitudes such as northern Canada and Greenland, coastal waters usually act as carbon sinks, absorbing excess carbon dioxide from the atmosphere. In in tropical areas such as the South China Sea, coastal waters are generally considered a source of carbon dioxide.

At the same time, human activities have increased the amount of nutrient pollution entering coastal waters from things like fertilizer on land. These nutrients stimulate the growth of algae within the continental shelves, which subsequently removes more carbon dioxide from the atmosphere, the researchers said.

According to the research team, this suggests that the continental shelves are becoming a crucial element in the global carbon cycle and for the climate system.

“It is important that scientists take into account the contribution of continental shelves to calculate global carbon budgets,” said Pierre Regnier, professor at Université Libre de Bruxelles. “The possibility of shelves becoming a more important carbon dioxide sink in the future should be considered in global carbon cycle models and flux assessments.”