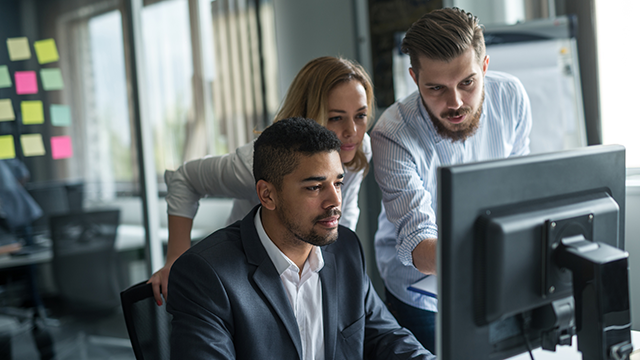 More than a decade after the introduction of the first smartphone, we are now awash in always-on technologies—email, IM, social media, Slack, Yammer, and so on. All that connectivity means we are constantly sharing our ideas, knowledge, thinking, and answers. Surely that "wisdom of the crowd" is good for problem solving at work, right?

New research by Harvard Business School associate professor Ethan Bernstein and colleagues, to be published online next week in Proceedings of the National Academy of Sciences of the United States of America (PNAS), suggests that "always on" may not be always effective. "Intermittently on" might, instead, be better for complex problem solving.

In their study, the three researchers—Bernstein, assistant professor Jesse Shore from the Questrom School of Business at Boston University, and professor David Lazer from Northeastern University—put together and studied the results of a number of three-person groups performing a complex problem-solving task. The members of one set of groups never interacted with each other, solving the problem in complete isolation; members of another set of groups constantly interacted with each other, as we do when equipped with always-on technologies; and a third set of groups interacted only intermittently.

From prior research, the researchers anticipated that the groups in which members never interacted would be the most creative, coming up with the largest number of unique solutions—including some of the best and some of the worst—representing a high level of variation that sprang from their working alone. In short, they expected the isolated individuals to produce a few fantastic solutions but have, as a group, a low average quality of solution (due to the variation). That proved to be the case.

The researchers also anticipated that the groups that constantly interacted would produce a higher average quality of solution, but that they would fail to find the very best solutions as often. In short, they expected the constantly interacting groups to be less variable but at the cost of their best solutions being more mediocre. That proved to be the case as well.

Bernstein and his co-authors see a number of workplace implications for these findings, including the advantages of alternating independent efforts with group work over a period of time to get optimal benefits. In some ways, that's how work has been done in organizations—with individuals working alone, then coming together in a meeting, then returning to work alone, etc. But those cycles are being broken by the constant advancement of technology. "As we replace those sorts of intermittent cycles with always-on technologies, we might be diminishing our capacity to solve problems well," Bernstein notes.

The researchers see parallels in a number of trends in organizations today. Agile approaches to teamwork have some of this intermittent characteristic, given that they are organized into "sprints," gatherings of people that focus on a particular problem and last only a short time. Similarly, hackathons are increasingly designed to provide, through their schedules, some intermittency of interaction.

In addition, organizations known for their excellence in creativity and brainstorming ideas, like IDEO, often use a process that has intermittency built in. Even open offices, a concept about which Bernstein has recently completed research, often have some group spaces (booths, meeting rooms) and individual spaces (phone booths, pods) in which interaction can be paused for a period of time.

Given their findings in this study, the researchers conclude that these design-based tools for achieving intermittent rather than constant interaction may be even more important for organizational productivity and performance than previously thought. And they warn that the march towards always-on technology—and more and more digital collaboration tools at work—should not disturb the intermittent isolation that those practices bring, lest it keep groups from achieving their best collective performance in solving complex problems.