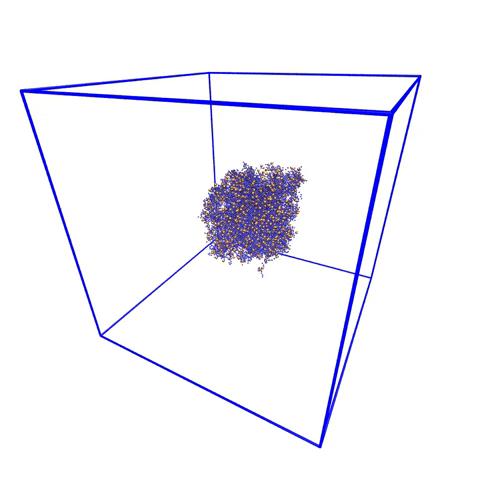 Formation of a stable droplet (protein-rich phase) that coexists with a dilute (protein-deficient) phase for the naturally occurring sequence.
Simulations based on the PIMMS modeling package developed by Alex Holehouse and Rohit Pappu, Washington University in St. Louis

Clumps of proteins inside cells are a common thread in many neurodegenerative diseases, including amyotrophic lateral sclerosis (ALS) or Lou Gehrig's disease. These clumps, or solid aggregates of proteins, appear to be the result of an abnormality in the process known as liquid-liquid phase separation (LLPS), in which individual proteins come together to form a liquid-like droplet.

To understand how the process goes awry, researchers need a better understanding of the mechanism that drives LLPS in the first place. What is it about any protein that would cause it to condense into a liquid?

Collaborative research between the Pappu Lab, led by Rohit Pappu in the McKelvey School of Engineering at Washington University in St. Louis, and the lab of Tanja Mittag at St. Jude Children's Research Hospital has uncovered the key to translating the patterns written into specific types of protein sequences that contribute to LLPS.

Importantly, they also have uncovered how specific arrangements of amino acids, which stray from the pattern, can negatively impact phase separation and give rise to the formation of solid aggregates instead of liquids.

Their research was published today in Science.

When certain cells are stressed, which happens regularly, cellular response proteins condense into membraneless organelles—squishy, liquid-like droplets that have defined boundaries but no delimiting membranes.

The droplets form by LLPS, a phenomenon that is conceptually similar to the process by which oil and vinegar separate from one another, forming coexisting liquid droplets.

Although it is called phase separation, LLPS is really a process of coming together, or condensing. Loosely condensed proteins are in a liquid-type phase; the more tightly they are packed, the more solid they become.

Under some circumstances, often due to mutations, an errant process causes some of the material in these protein-rich droplets, also known as biomolecular condensates, to morph into more solid aggregates.

The condensation, in many cases, is driven by the intrinsically disordered regions (IDR) of the protein. These are stretches of the protein with no defined three-dimensional shape, and yet they feature prominently in key functional roles, especially in the brain.

Pappu, the Edwin H. Murty Professor of Engineering, and his coworkers had shown that certain parts of the IDRs were sticky—they had a tendency to stick to each other on the same protein, or on those nearby. These "stickers," which are actually amino acids on the protein chain, and the material between them, called spacers, are the basis for the sticker-and-spacer model, a framework used to describe LLPS. 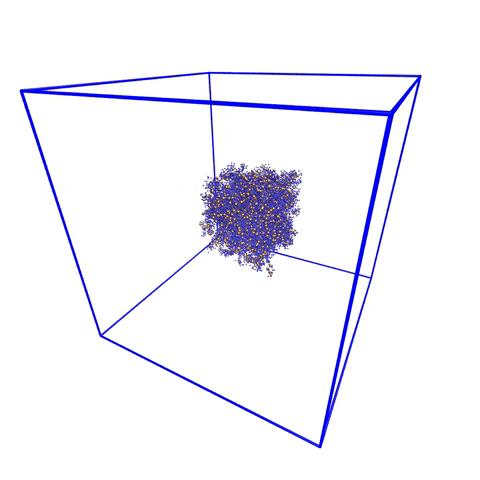 Reducing the number of stickers destabilizes a droplet such that, at the same temperature as the previous simulation, this droplet sheds protein more efficiently and more proteins accumulate in the dilute phase.
Simulations based on the PIMMS modeling package developed by Alex Holehouse and Rohit Pappu, Washington University in St. Louis

The collaboration, which involved Mittag's team at St. Jude team, was driven by experiments performed in the Mittag lab to try to identify the key stickers that are responsible for driving phase separation. To do this, they started by observing interactions essentially down at single amino acid resolution using nuclear magnetic resonance spectroscopy.

The results of their experiments uncovered which amino acids were sticky, but couldn't provide the kind of holistic picture needed to fully understand the relationship between stickers, spacers and LLPS.

That's where Pappu's team came in. Building on experimental data from Mittag's team, Pappu and his colleague Alex Holehouse (who until the end of 2019 was a postdoctoral fellow in the Pappu lab and is now an assistant professor of biochemistry and molecular biophysics in the School of Medicine) developed an open source computational approach known as PIMMS (Polymer Interactions in Multicomponent Mixtures) to arrive at a quantitative and predictive understanding of the interactions among stickers that drive phase separation.

Additional lab experiments at St. Jude were used to test and confirm their predictions.

Together, the models and experiments revealed new aspects of the relationship between these stickers and phase separation.

Although the model showed variations in the number and placement of stickers, "the patterning of the stickers along the chain was very well conserved," Pappu said. "When you see something that is very well conserved in evolution, you decide that it is evolutionarily important."

So, naturally, Holehouse, an assistant professor of biochemistry and molecular biophysics, and Pappu used PIMMS to see what would happen if the important pattern was changed.

The team asked, "What happens if we just bring all of these stickers and put them right next to one another?" The first key finding showed the interactions between the stickers became so strong that proteins began sticking to each other, piling up and growing, eventually growing dense enough to become more solid than liquid. 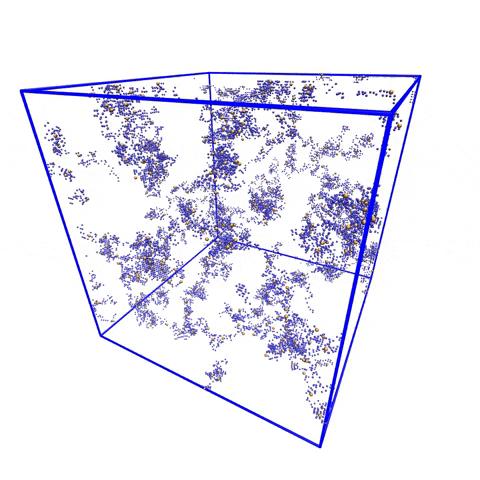 Further reductions in the number of stickers abrogates droplet formation.
Simulations based on the PIMMS modeling package developed by Alex Holehouse and Rohit Pappu, Washington University in St. Louis

The second key finding was a better understanding of the importance of the regions between the stickers—the spacers. Like noncoding or "junk" DNA, the spacers at first showed some interesting traits, but did not seem to have an integral role in protein's functioning.

It turns out, spacers are crucial to understanding LLPS. "The spacers dilute the interaction strength of the stickers, which allows for the formation of a liquid," Mittag said. "Without spacers, the stickers would be too close and proteins would always condense to solids.

Understanding the rules that drive LLPS gives researchers a new way to "read" proteins to determine whether they will condense into a liquid or into the more problematic solid form.

LLPS is relevant to more than neurodegenerative diseases. It also has the potential to transform our understanding of the underlying mechanisms of many biological processes. "This model is relevant to understanding cancers," Mittag said, because of its application to different types of proteins.

The potential held by further collaboration is powerful, Pappu noted.

"We're talking about something that's written into a molecule giving you something that's manifest almost at the cellular scale," Pappu said. "Now you can play engineer and design things. You can think about neurodegenerative disorders and make sense of what might be going wrong.

"The funding provided by St. Jude has been key to catalyzing the collaboration that continues between the Mittag lab and my lab," Pappu said. "The collaboration also benefits from contributions of the Holehouse and Soranno labs in the School of Medicine—labs that also are an integral part of the Center for Science and Engineering of Living Systems."

- This press release was originally published on the Source, WUSTL's news website