DNA sequencing is the key technology for personalized and precision medicine initiatives, enabling rapid discoveries in biomedical science. An individual's complete genome sequence provides important markers and guidelines for medical diagnostics, healthcare, and maintaining a healthy life. To date, the cost and speed involved in obtaining highly accurate DNA sequences has been a major challenge. While various advancements have been made over the past decade, the high-throughput sequencing instruments widely used today depend on optics for the detection of four DNA building blocks: A, C, G, and T. To explore alternative measurement capabilities, electronic sequencing of an ensemble of DNA templates has been developed for genetic analysis. Nanopore strand sequencing, wherein a single strand DNA is threaded through the nanoscale pores under an applied electrical voltage to produce electronic signals for sequence determination at single molecule level, has recently been developed; however, because the four nucleotides are very similar in their chemical structures, they cannot easily be distinguished using this method. Researchers are therefore actively pursing the research and development of an accurate single-molecule electronic DNA sequencing platform as it has the potential to produce a miniaturized DNA sequencer capable of deciphering the genome to facilitate personalized precision medicine. 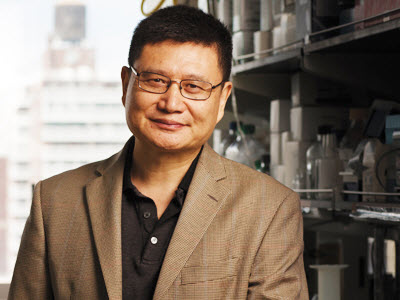 Previously, researchers from the laboratories of Ju at Columbia and Kasianowicz at NIST reported the general principle of nanopore sequencing by synthesis (SBS), the feasibility of design and synthesis of polymer-tagged nucleotides as substrates for DNA polymerase, the detection and the differentiation of the polymer tags by nanopore at the single molecule level [Scientific Reports 2, 684 (2012) doi: 10.1038/srep00684; http://www.nature.com/articles/srep00684]. The current PNAS paper describes the construction of the complete nanopore SBS system to produce single molecule electronic sequencing data with single-base resolution. This SBS strategy accurately distinguishes four DNA bases by electronically detecting and differentiating four different polymer tags attached to the 5'-phosphate of the nucleotides during their incorporation into a growing DNA strand catalyzed by polymerase, a DNA-synthesizing enzyme. The researchers designed and synthesized novel nucleotides tagged at the terminal phosphate with oligonucleotide-based polymers to perform nanopore SBS on an α-hemolysin protein nanopore array platform. The tags on the polymer-labeled nucleotides, which were verified to be active substrates for DNA polymerase, produce different electrical current blockade levels. They constructed a nanopore array on an electronic chip bearing multiple electrodes; the array is composed of protein channels that were coupled to a DNA polymerase that was bound to a primed DNA template. Addition of distinct custom-designed polymer tagged nucleotides to the nanopore array triggers DNA synthesis. By blocking the channel's ionic current to different levels, the distinct tags provide a readout of the template sequence in real time with single-base resolution.

As Carl Fuller, lead author, Adjunct Senior Research Scientist in the Ju Laboratory of the Chemical Engineering Department at Columbia and Director of Chemistry at Genia, points out, "The novelty of our nanopore SBS approach begins with the design, synthesis, and selection of four different polymer-tagged nucleotides. We use a DNA polymerase covalently attached to the nanopore and the tagged nucleotides to perform SBS. During replication of the DNA bound to the polymerase, the tag of each complementary nucleotide is captured in the pore to produce a unique electrical signal. Four distinct polymer tags yielding distinct signatures that are recognized by the electronic detector in the nanopore array chip are used for sequence determination. Thus, DNA sequences are obtained for many single molecules in parallel and in real time. The four polymer tags are designed to offer much better distinctions among themselves, in contrast to the small differences among the four native DNA nucleotides, thereby overcoming the major challenge faced by other direct nanopore sequencing methods." Moreover, the tags can be further optimized with respect to size, charge, and structure to provide optimal resolution in the nanopore SBS system.

"This exciting project brings together scientists and engineers from both academia and industry with combined expertise in molecular engineering, nanotechnology, genomics, electronics and data science to produce revolutionary, cost-effective genetic diagnostic platforms with unprecedented potential for precision medicine," says Ju. "We are extremely grateful for the generous support from the NIH that enabled us to make rapid progress in the research and development of the nanopore SBS technology, and the outstanding contributions from all the members of our research consortium."

According to Ju, the researchers have already pushed beyond what was demonstrated in the PNAS study where the sequencing data was obtained on an early prototype sequencer based on nanopore SBS. The throughput and performance of the current sequencer has progressed beyond what was reported in the PNAS paper. The feasibility of reaching read-lengths of over 1000 bases of DNA has recently been achieved. Going forward, the collaborative research team will continue to optimize the tags by tweaking the linkers, structure, and charge at the molecular level, and fine tuning the polymerase and the electronics for the nanopore SBS system with an aim to accurately sequence an entire human genome rapidly and at low cost, thereby enabling it to be used in routine medical diagnoses.

This research was funded by a grant from National Institutes of Health (NIH).