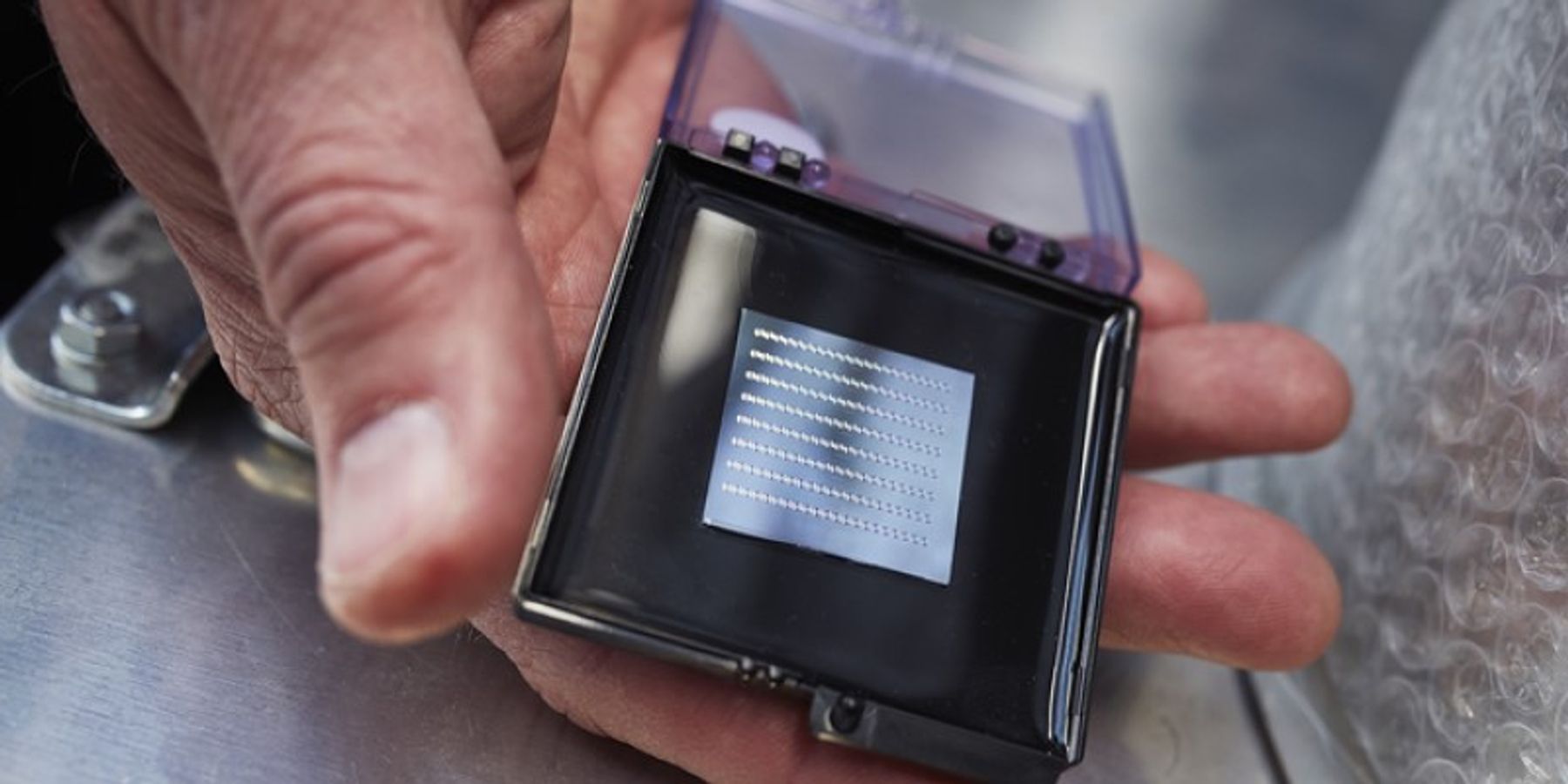 The new component is made of silicon nitride and consists of nine separate waveguides (left). Each waveguide is composed of 22 spirals and can amplify light by about ten times with a noise figure of only 1.2 decibels. Each spiral (right) has an area of 1 square millimeter and the shape enables the compact design of the amplifier.
Henrik Sandsjö/Chalmers University of Technology, Sweden

Researchers at Chalmers University of Technology, Sweden, present a unique optical amplifier that is expected to revolutionize both space and fiber communication. The new amplifier offers high performance, is compact enough to integrate into a chip just millimeters in size, and—crucially—does not generate excess noise.

“This could be compared to switching from older, dial-up internet to modern broadband, with high speed and quality," says professor Peter Andrekson, head of the Photonics Laboratory at the Department of Microtechnology and Nanoscience at Chalmers.

Optical communication makes it possible to send information over very long distances. The technology is useful in a range of applications, such as space communication and in fiber optic cables for internet traffic.

With communication based on light, rather than radio waves, we could, for example, quickly send high-resolution images from Mars. The information, carried by laser beams, could be sent with high speed from a transmitter on the planet to a receiver on Earth or on the Moon. Optical communication also allows us to use the internet around the world—whether the signal is transferred in optical fiber cables under the seabed or transmitted wirelessly.

Because the light—carrying the information between two distant points—loses power along the way, a large number of optical amplifiers are needed. Without amplifiers, up to 99 percent of the signal in an optical fiber cable would disappear within 100 kilometers.

A constant battle against excess noise

A well-known problem in optical communication, however, is that these amplifiers add excess noise that significantly impairs the quality of the signal you want to send or receive. Now, the Chalmers researchers present an extremely promising solution to an obstacle that has existed for decades.

“We have developed the world's first optical amplifier that significantly enhances the range, sensitivity, and performance of optical communication, that does not generate any excess noise—and is also compact enough to be of practical use,” says Ping Zhao, postdoc at the Photonics Laboratory at Chalmers and one of the lead authors of the scientific paper, now published in Science Advances.

The light amplification in the project is based on a principle known as the Kerr effect, which so far is the only known approach that amplifies light without causing significant excess noise. The principle has been demonstrated before, but never in such a compact format—previous versions were too bulky to be useful.

The new amplifier fits in a small chip just a few millimeters in size, compared to previous amplifiers that have been several thousand times larger.

Tiny, quiet, and with high performance

Additionally, the new amplifiers offer a level of performance high enough that they can be placed more sparingly, making them a more cost-effective option. They also work in a continuous wave (CW) operation rather than a pulsed operation only.

“What we demonstrate here represents the first CW operation with an extremely low noise in a compact integrated chip. This provides a realistic opportunity for practical use in a variety of applications. Since it’s possible to integrate the amplifier into very small modules, you can get cheaper solutions with much better performance, making this very interesting for commercial players in the long run,” says Andrekson.

“This amplifier shows unprecedented performance. We consider this to be an important step towards practical use, not only in communication, but in areas including quantum computers, various sensor systems, and in metrology when making atmospheric measurements from satellites for Earth monitoring.”