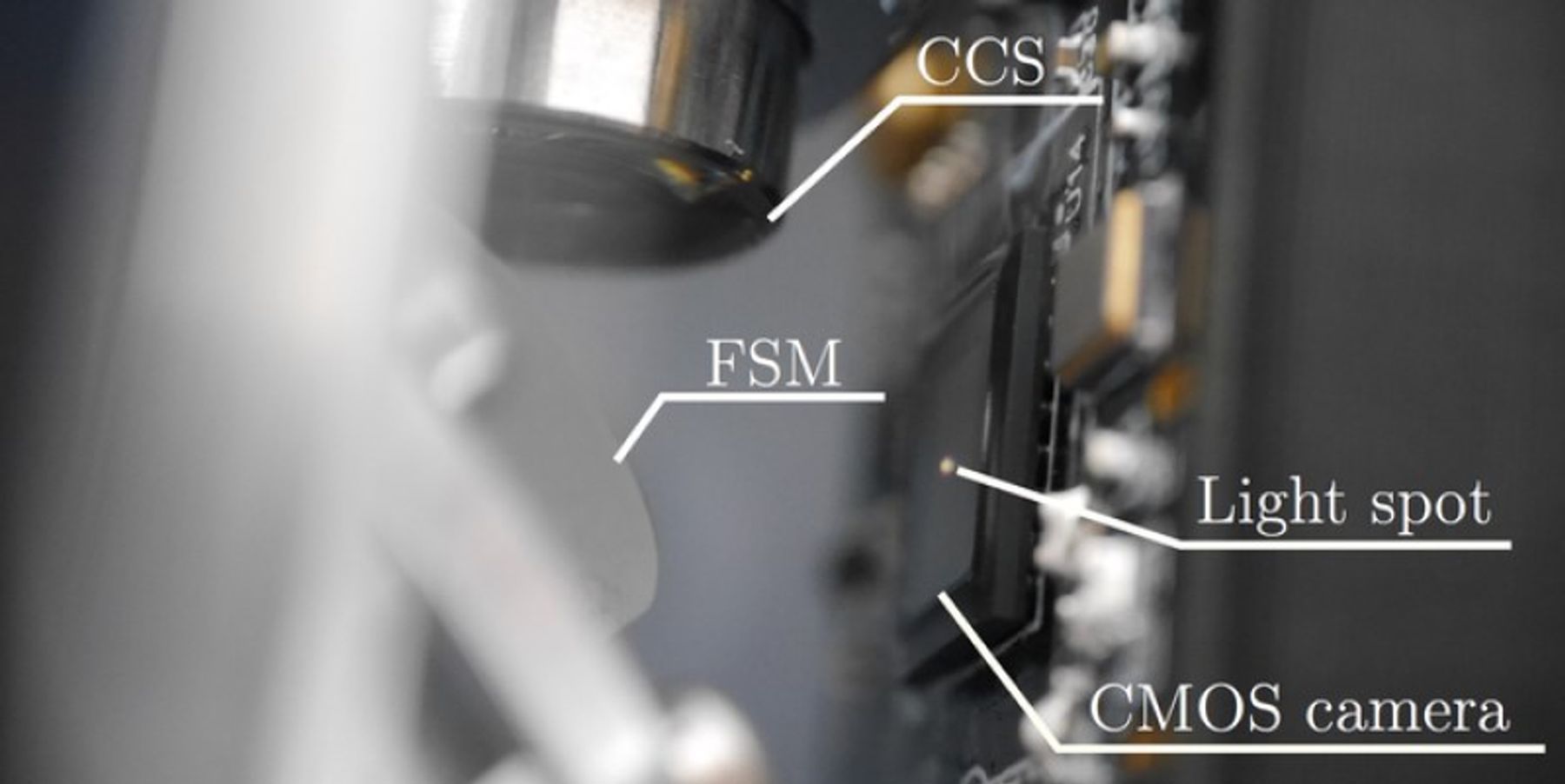 The image shows the new system during a calibration process that involves a CMOS camera. The light spot where measurements are acquires as well as the fast-steering mirror (FSM) and confocal chromatic sensor (CCS) can be seen.
Daniel Wertjanz, Christian Doppler Laboratory for Precision Engineering for Automated
Usage Restrictions

Because vibrations make it difficult to capture precision 3D measurements on the production line, samples are periodically taken for analysis in a lab. However, any defective products made while waiting for results must be discarded.

To create a system that could operate in the vibration-prone environment of an industrial manufacturing plant, researchers headed by Georg Schitter from Technische Universität Wien in Austria combined a compact 2D fast steering mirror with a high precision 1D confocal chromatic sensor.

“Robot-based inline inspection and measurement systems such as what we developed can enable 100 percent quality control in industrial production, replacing current sample-based methods,” said Ernst Csencsics, who co-led the research team with Daniel Wertjanz. “This creates a production process that is more efficient because it saves energy and resources.”

As described in The Optical Society (OSA) journal Applied Optics, the new system is designed to be mounted on tracking platform placed on a robotic arm for contactless 3D measurements of arbitrary shapes and surfaces. It weighs just 300 grams and measures 75 x 63 x 55 millimeters cubed, which is about the size of an espresso cup.

“Our system can measure 3D surface topographies with unprecedented combination of flexibility, precision, and speed,” said Wertjanz, who is pursuing a PhD on this research topic. “This creates less waste because manufacturing problems can be identified in real-time, and processes can be quickly adapted and optimized.”

From lab to fab

Precision measurements are usually performed with bulky instruments in the lab. To bring this capability to the production floor, the researchers developed a system based on a 1D confocal chromatic distance sensor developed by Micro-Epsilon, a partner on this research project. Confocal chromatic sensors can precisely measure displacement, distance and thickness using the same principles as confocal microscopes but in a much smaller package.

They combined the confocal sensor with a highly integrated fast steering mirror they previously developed that measured just 32 millimeters in diameter. They also developed a reconstruction process that uses the measurement data to create a 3D image of the sample’s surface topography. The 3D measurement system is compact enough to fit on a metrology platform, which serves as connection to a robotic arm and compensates for vibrations between sample and measurement system through active feedback control.

“By manipulating the optical path of the sensor with the fast-steering mirror, the measurement spot is scanned quickly and precisely across the surface area of interest,” said Wertjanz. “Because only the small mirror needs to be moved, the scan can be performed at high speeds without compromising precision.”

To test the new system, the researchers used various calibration standards featuring structures with defined lateral sizes and heights. These experiments demonstrated that the system can acquire measurements with a lateral of 2.5 microns and axial resolution of 76 nanometers.

“This system could eventually bring a variety of benefits to high-tech manufacturing,” said Wertjanz. “In-line measurements could enable zero-failure production processes, which are especially useful for low-volume fabrication. The information could also be used to optimize the manufacturing process and machine tools settings, which can increase overall throughput.”

The researchers are now working to implement the system on the metrology platform and incorporate it with a robotic arm. This will allow them to test the feasibility of robot-based precision 3D measurements on free-form surfaces in vibration-prone environments such as an industrial production line.

- This press release was originally published on The Optical Society website