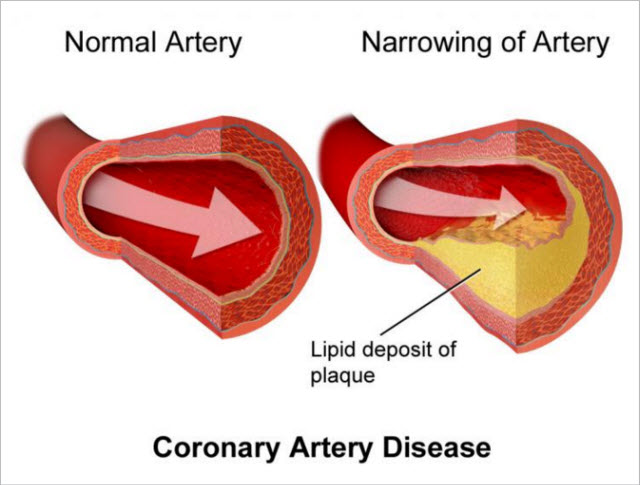 Atherosclerosis can be one of the results of elevated lipids and inflammation.Image Courtesy of: Blausen.com staff, courtesy of Oregon State University

(Corvallis, OR)—A recent study at Oregon State University has identified specific intake levels of xanthohumol, a natural flavonoid found in hops, that significantly improved some of the underlying markers of metabolic syndrome in laboratory animals and also reduced weight gain.

The findings were published in a special issue of Archives of Biochemistry and Biophysics that was focused on "Polyphenols and Health," and they suggest a possible new approach to issues such as human obesity, high cholesterol and elevated glucose.

Combinations of these problems, collectively known as metabolic syndrome, are linked to some of the major health issues and causes of death in the developed world today—especially cardiovascular disease and type-2 diabetes.

In this research, laboratory mice were fed a high-fat diet, and given varying levels of xanthohumol. Compared to animals given none of this supplement, the highest dosage of xanthohumol given to laboratory rats cut their LDL, or "bad" cholesterol 80 percent; their insulin level 42 percent; and their level of IL-6, a biomarker of inflammation, 78 percent.

Because they were still growing, eating a rich diet, gaining weight and becoming obese, the weight of the lab animals increased, but by 22 percent less in those receiving xanthohumol, even though all animals ate the same amount of food. Intake of xanthohumol appears to increase their oxygen consumption and metabolic rate, with implications for weight control.

"This is the first time we've seen one compound with the potential to address so many health problems," said Cristobal Miranda, a research assistant professor with OSU's Linus Pauling Institute and lead author on this study. "These were very dramatic improvements."

More research will be required to show safety and efficacy in humans, the researchers said.

"Work is still needed to further demonstrate the safety of high doses of xanthohumol, but dosages 15-30 times higher than we used have already been given to animals with no apparent problems," said Fred Stevens, a professor in the OSU College of Pharmacy, principal investigator with the Linus Pauling Institute, and corresponding author on the research.

"After further study, this might provide an effective treatment for metabolic syndrome at a very low cost."

This study for the first time also identified one of the mechanisms of action of xanthohumol—it appears to decrease plasma levels of PCSK9, a protein that plays a role in cholesterol levels. Lowering levels of PCSK9 should increase the clearance of LDL cholesterol from the blood.

Metabolic syndrome is defined by clinical diagnosis of three or more of several conditions, including abdominal obesity, elevated lipids, high blood pressure, pro-inflammatory state, a pro-thrombotic state, and insulin resistance or impaired glucose tolerance. About 25-34 percent of the adults in the United States meet these criteria, putting them at significantly increased risk for cardiovascular disease and type-2 diabetes.

Direct health care costs arising from obesity or related disorders account for up to 10 percent of U.S. health care expenditures, the researchers noted in their study.

Xanthohumol has been the subject of considerable research for its potential health benefits, as have other flavonoids such as those found in tea, garlic, chocolate, apples, and blueberries.

Xanthohumol is found naturally in hops and beer, but the highest level used in this research was 60 milligrams per kilogram of body weight per day. This corresponds to a human equivalent dose of 350 milligrams per day for a 70-kilogram person, which far exceeds any amount that could be obtained by ordinary dietary intake. A level that high would equate to a beer intake of 3,500 pints per day for a human adult.

However, that amount of xanthohumol could readily be obtained in a dietary supplement that could be taken once a day.

This work was supported by the Linus Pauling Institute; OSU College of Pharmacy; Hop Steiner, Inc.; the Buhler-Wang Research Fund; and the National Institutes of Health.