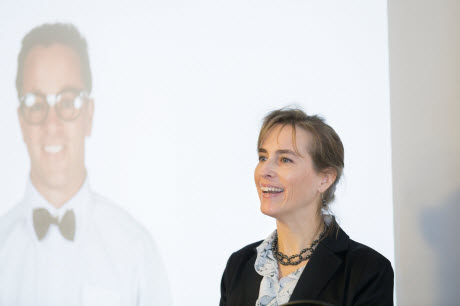 Illa Burbank, president of IthacaSTEM Advocates, speaks at the Oct. 24 conference.Photo credit: Chris KitchenAt the “From Mud Pies to Dinosaur Bones: Encouraging Girls’ Interest in STEM” American Association of University Women’s Oct. 24 conference, conversation centered around AAUW’s vision that “... the low number of women and girls pursuing STEM fields is not a status quo we can live with. It has significant implications for women’s financial security, economic growth, and global innovation.”

The event, held at the Museum of the Earth, featured panelists and attendees from such New York state areas as Cortland, Ithaca, the Mohawk Valley, Binghamton and Oswego. Presentations focused on keeping girls interested in STEM throughout girlhood and beyond. Speakers discussed the causes of the gender disparity in the fields of science, technology, engineering and mathematics as well as possible ways of moving forward.

The schedule of the day reflected the fact that STEM career fields often require educational paths that start early on in one’s academic life. Presenters focused on the preschool to high school years as well as undergraduate and graduate STEM study. Speakers underlined challenges and opportunities for progress that emerge at particular educational stages and shared their personal and professional experience working on the issue.

Warren Allmon’s historical overview “Women in Paleontology” concluded the conference. Allmon, the Hunter R. Rawlings III Professor of Paleontology in the Department of Earth and Atmospheric Sciences and director of the Paleontological Research Institution (PRI), recounted the history of women’s participation in paleontological research through the stories of well known female paleontologists like Mary Anning and Mignon Talbot. He used their examples to underline that even in the context of discouraging conditions, women have made enormous contributions to scientific advancement.

Highlighting the importance of institutional and personal support, Allmon said neither scientific skill nor curiosity are correlated with gender and the fight against gender disparity in STEM is really an effort to eliminate barriers. He reiterated his conviction that all children, regardless of gender, start out as scientists and that the key to the right approach is that one “should not get kids interested in science. One should keep kids interested in science.”

Allmon argued that while there has been considerable improvement in gender balance in paleontology and the sciences more generally, there is still a lot to be done. He emphasized that PRI and Cornell have a long history of supporting women in the sciences and remarked that such history positions these institutions to lead in the effort today. Allmon also revealed that a national video archive and a moving exhibit that are specifically devoted to women paleontologists are being developed.