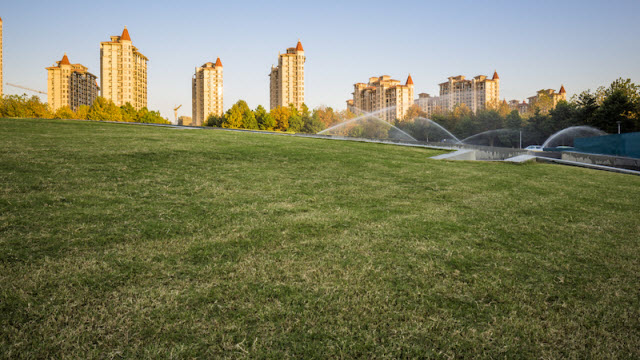 The energy and climate benefits of cool roofs have been well established: By reflecting rather than absorbing the sun’s energy, light-colored roofs keep buildings, cities, and even the entire planet cooler. Now a new study by the Department of Energy’s Lawrence Berkeley National Laboratory (Berkeley Lab) has found that cool roofs can also save water by reducing how much is needed for urban irrigation.

“This is the first study to look at the link between water and heat mitigation strategies in urban areas,” Vahmani said. “You might not do cool roofs just to save water, but it’s another previously unrecognized benefit of having cool roofs. And from a water management standpoint, it’s an entirely different way of thinking—to manipulate the local climate in order to manipulate water demand.”

Berkeley Lab researchers Pouya Vahmani and Andrew Jones found that implementing cool-roofs over NorCal (a) and SoCal (b) leads to average urban evaporative water demand reductions of 15% and 18%, respectively.Image courtesy of Berkeley Lab

One impetus for the study was to investigate how a future warmer climate would affect the demand of water, especially as more cities are seeking out climate mitigation and adaptation strategies. “While urban heat mitigation strategies have been shown to have beneficial effects on health, energy consumption, and greenhouse gas emissions, their implications for water conservation have not been widely examined,” Vahmani and Jones write in their study.

Related Article: How Cool Roofs Can Help You Beat the Heat and Save Money

Cool roofs can reduce water demand by reducing the ambient air temperature—this study found urban cooling ranging from 1 to 1.5 degrees Celsius—which means lawns and other landscaping need less water. The scientists, both in the Lab’s Climate and Ecosystem Sciences Division, acknowledge that modification of human behavior may be needed in order to realize this water-savings benefit.

“There is a key assumption in here that people would adjust their irrigation behavior in response,” Jones said. “In order to reap the benefits, we would need people to be aware of the appropriate amount of water, or else use sensors or smart irrigation systems, which are a good idea anyway.”

Furthermore, they found that the water-savings benefit was even stronger on hotter days. “So that’s an indication that in a future climate, where hot days are occurring much more frequently, the added benefit of doing cool roofs might be even more dramatic,” Jones said. “But that has yet to be investigated.”

Vahmani and Jones used a high-resolution regional climate model for their analysis; Vahmani then added a component to the model to account for irrigation water. “It basically adjusts soil moisture to mimic irrigation events,” Vahmani said. “We also used remote sensing data to improve the representation of physical characteristics of the land surface, which resulted in improved model performance.”

The model was validated with data from Northern California’s Contra Costa Water District for customers who were irrigation-only users. “The irrigation water demands simulated by the model were matched quite well by the customer data, given the complex nature of urban irrigation,” Vahmani said.

Model simulations were run over 15 years in 18 counties in Northern and Southern California, assuming a control scenario that reflects the current status of the urban areas, and a cool roof scenario in which all buildings had commercially available cool roofs installed.

Countywide irrigation water savings ranged from 4 percent to 9 percent, with per capita savings largest in medium density environments, or those with a mix of buildings and landscaping. “It’s in the suburban areas where you see the most water savings,” Jones said.

The study also confirmed a finding that has been emerging: that water conservation measures that directly reduce irrigation, such as drought-tolerant landscaping, can have the unintended consequence of increasing temperatures in urban areas. Vahmani and Jones ran a simulation of the most extreme case—a complete cessation of irrigation—and found a mean daytime warming of 1 degree Celsius averaged over the San Francisco Bay Area.

“These results show that the warming signal from strategies that focus only on outdoor water-use reductions can meaningfully offset the cooling effects of a major heat mitigation strategy, such as citywide cool roof deployment,” they write.

With climate effects increasingly playing out at urban scales, Berkeley Lab scientists are looking to apply their models in urban areas with large population centers and concentrated infrastructure. “This study is part of a larger effort to improve our ability to model microclimates in urban areas and other climate phenomena at decision-relevant scales,” Jones said. “For example, we’re also interested in using this to look at the role of fog in the microclimates of the Bay Area.”

These efforts are also part of Berkeley Lab’s Water Resilience Initiative, part of which aims to develop approaches to predict hydroclimate at scales that can be used to guide water-energy strategies.

Vahmani and Jones plan to follow up this study by expanding into agriculture as well as investigating strategies for mitigating hot weather and growing water demand. “First we want to see how much climate change will increase water demand. Next will be to come up with strategies to counter that,” Vahmani said. “In urban areas, we’ll look at how cool roofs can ameliorate both extreme heat demand and irrigation demands associated with future warming. Whereas in agricultural areas, the strategies will have to do with irrigation technology and what kind of crops you’re growing.”

The work was funded through Berkeley Lab’s Laboratory Directed Research and Development program, which is designed to seed innovative science and new research directions.