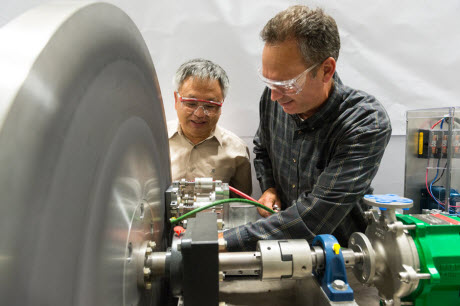 Argonne high-energy physicist Wei Gai and engineer Scott Doran work on a newly developed positron target that could help provide a key component for the proposed International Linear Collider.Photo credit: Wes Agresta/Argonne National LaboratoryAlthough a lot of time and effort in particle physics are devoted to finding ways to increase the energy of certain experiments, sometimes it is even more important to find ways to safely, quickly, and easily remove energy from an experiment.

Researchers at the U.S. Department of Energy's (DOE's) Argonne National Laboratory have recently developed a new ultra-low-friction sliding contact mechanism that uses chilled water to remove heat from a key component of a next-generation collider.

"When you think about driving a car, you have to use friction to brake your wheels," said Wei Gai, an Argonne high-energy physicist and leader of the Argonne Wakefield Accelerator group. "For us, the key challenge was in finding a way to have a brake-like contact of metal pads against a high speeding wheel without much friction."

For the past two years, Gai and his colleagues have been attempting to assemble a working prototype for a key component of the proposed future International Linear Collider (ILC). This device, called a "positron target," would enable scientists to produce positrons, the antimatter sibling particle of the electron.

At the ILC, a 20- to 30-mile-long machine being considered by Japan, scientists would collide electrons and positrons with each other, and the resulting energetic particle annihilations could shed light on a number of unsolved questions in physics that range from unknown dimensions to candidates for dark matter.

"The number one priority for the ILC has been to get a reliable source of polarized positrons," Gai said. Although the positrons are not polarized by the target—that is done in a separate step—having a reliable positron source is a big step forward.

Positrons are created when a highly energetic photon—called a gamma ray—comes into the vicinity of an atomic nucleus. Then, in a process known as pair production, the energy contained in the photon is spontaneously converted to one electron and one positron.

"To some people, this seems like the universe is making something out of nothing," said Argonne electrical engineer Wanming Liu. "But Einstein showed that energy and mass can be converted into each other, so as long as the incoming photon has enough energy, you can create a positron and an electron together."

Creating and collecting those positrons, however, has been no easy task. First, the gamma-ray beam needed to create the positrons works somewhat like an intense and focused flashlight and will essentially burn right through anything left directly in its path for too long.

To deal with this problem, the researchers first created a titanium alloy wheel approximately three feet in diameter and half an inch thick. The incoming gamma-ray beam would strike a spot toward the outer edge of the wheel, causing it to heat up as it generates positron-electron pairs. The electrons and excess gamma rays would be dumped out, while the positrons would be harvested through magnetic steering.

To prevent the damage to the wheel from prolonged exposure at a single spot, the research team designed a way to spin the wheel quickly—at approximately 220 miles per hour—continuously changing the spot where the beam hit the wheel.

While this resolved one issue in designing a positron target, the real challenge involved removing the heat energy from the wheel. Because the positrons need to be captured and accelerated in a vacuum and because the incoming gamma-ray beam could burn through anything standing in its way for too long, the researchers needed to operate the target in an ultra-high vacuum environment. Working in a vacuum, however, meant they could not dissipate heat to the ambient environment, so they needed another solution.

The answer they found—conduction—would be familiar to anyone who has ever felt another person s cold feet in the middle of the night. By putting the surface of a cooling pad coated with a thin layer of tungsten disulfide or similar dry lubricants directly in contact with the rotating wheel, the researchers found that they could suck heat energy out of the system, preventing the target from overheating or being otherwise damaged. The cooling pad contains a chamber filled with chilled water that could be continually replenished from outside the vacuum-sealed apparatus.

According to Gai, the next stage of the research involves operating the positron target continuously for a period of about seven or eight months in order to make sure that the machine could hold up under the stresses of a prolonged period of experimental study. The final design was completed by Argonne engineer Scott Doran.

"Because the ILC represents such a big international investment, we need to make sure that everything is tested, checked out and ready to go as much as possible ahead of time," Gai said.

The effort to create the target was funded by DOE's Office of Science.