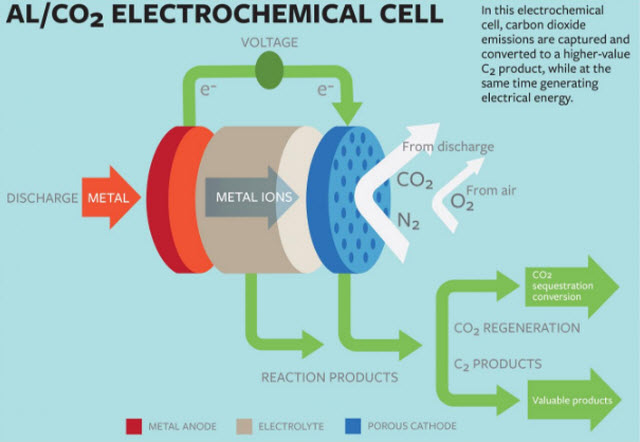 This graphic explains novel method for capturing the greenhouse gas and converting it to a useful product—while producing electrical energy.Image Courtesy of: Cornell University

(Ithaca, NY)—While the human race will always leave its carbon footprint on the Earth, it must continue to find ways to lessen the impact of its fossil fuel consumption.

"Carbon capture" technologies—chemically trapping carbon dioxide before it is released into the atmosphere—is one approach. In a recent study, Cornell University researchers disclose a novel method for capturing the greenhouse gas and converting it to a useful product—while producing electrical energy.

Their paper, "The O2-assisted Al/CO2 electrochemical cell: A system for CO2 capture/conversion and electric power generation," was published July 20 in Science Advances.

The group's proposed cell would use aluminum as the anode and mixed streams of carbon dioxide and oxygen as the active ingredients of the cathode. The electrochemical reactions between the anode and the cathode would sequester the carbon dioxide into carbon-rich compounds while also producing electricity and a valuable oxalate as a byproduct.

In most current carbon-capture models, the carbon is captured in fluids or solids, which are then heated or depressurized to release the carbon dioxide. The concentrated gas must then be compressed and transported to industries able to reuse it, or sequestered underground. The findings in the study represent a possible paradigm shift, Archer said.

"The fact that we've designed a carbon capture technology that also generates electricity is, in and of itself, important," he said. "One of the roadblocks to adopting current carbon dioxide capture technology in electric power plants is that the regeneration of the fluids used for capturing carbon dioxide utilize as much as 25 percent of the energy output of the plant. This seriously limits commercial viability of such technology. Additionally, the captured carbon dioxide must be transported to sites where it can be sequestered or reused, which requires new infrastructure."

The group reported that their electrochemical cell generated 13 ampere hours per gram of porous carbon (as the cathode) at a discharge potential of around 1.4 volts. The energy produced by the cell is comparable to that produced by the highest energy-density battery systems.

Another key aspect of their findings, Archer says, is in the generation of superoxide intermediates, which are formed when the dioxide is reduced at the cathode. The superoxide reacts with the normally inert carbon dioxide, forming a carbon-carbon oxalate that is widely used in many industries, including pharmaceutical, fiber and metal smelting.

"A process able to convert carbon dioxide into a more reactive molecule such as an oxalate that contains two carbons opens up a cascade of reaction processes that can be used to synthesize a variety of products," Archer said, noting that the configuration of the electrochemical cell will be dependent on the product one chooses to make from the oxalate.

Al Sadat, who worked on onboard carbon capture vehicles at Saudi Aramco, said this technology in not limited to power-plant applications. "It fits really well with onboard capture in vehicles," he said, "especially if you think of an internal combustion engine and an auxiliary system that relies on electrical power."

Related Article: How Garden Grass Could Become a Source of Cheap and Clean Renewable Energy

He said aluminum is the perfect anode for this cell, as it is plentiful, safer than other high-energy density metals and lower in cost than other potential materials (lithium, sodium) while having comparable energy density to lithium. He added that many aluminum plants are already incorporating some sort of power-generation facility into their operations, so this technology could assist in both power generation and reducing carbon emissions.

A current drawback of this technology is that the electrolyte—the liquid connecting the anode to the cathode—is extremely sensitive to water. Ongoing work is addressing the performance of electrochemical systems and the use of electrolytes that are less water-sensitive.

This work made use of the Cornell Center for Materials Research, which is supported by the National Science Foundation. Funding came from a grant from the King Abdullah University of Science and Technology Global Research Partnership program.