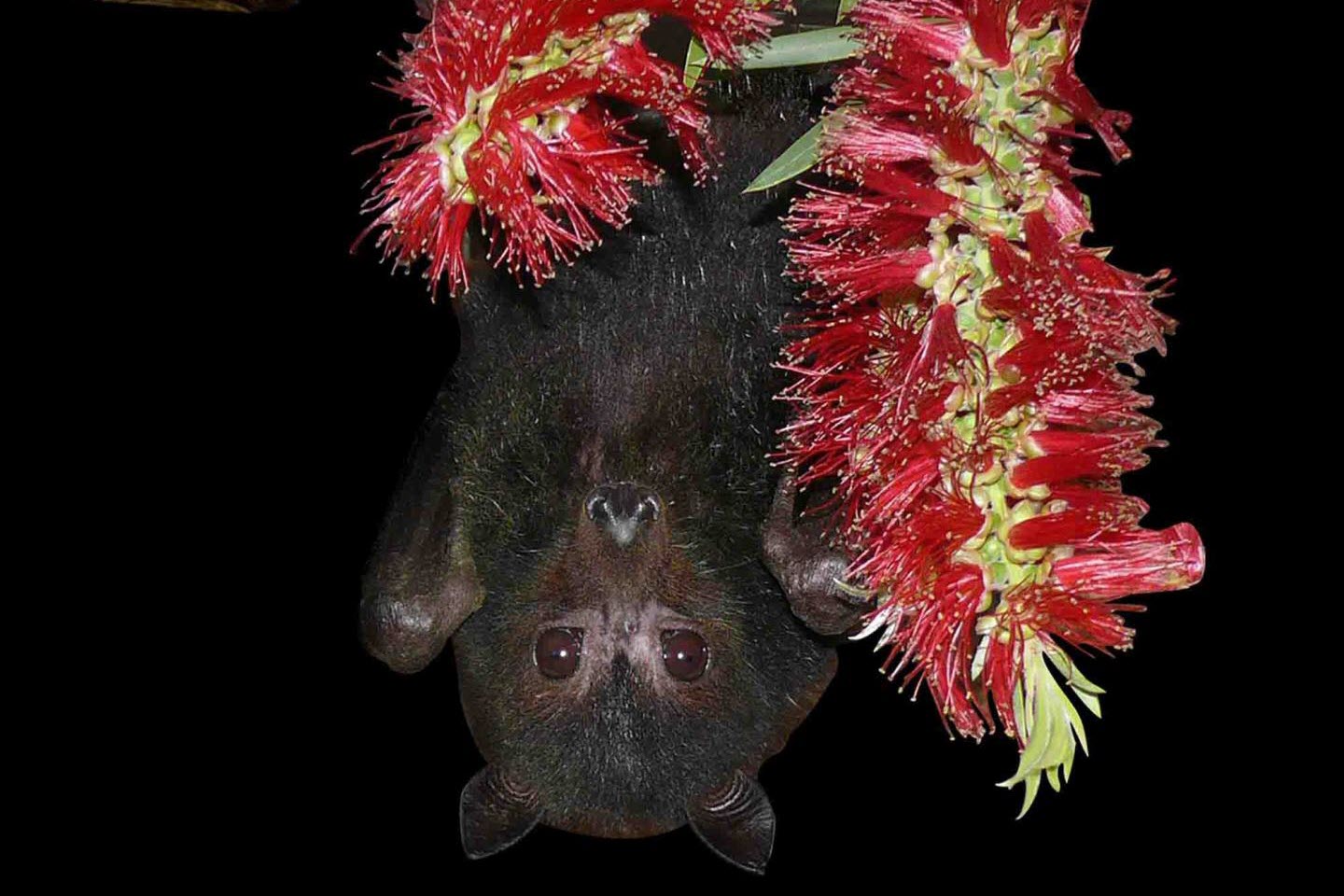 The Australian black flying fox is a reservoir of Hendra virus, which can be transmitted to horses and sometimes humans.
Photo courtesy of Linfa Wang, Duke University

It's no coincidence that some of the worst viral disease outbreaks in recent years—SARS, MERS, Ebola, Marburg, and likely the newly arrived 2019-nCoV virus—originated in bats.

A new University of California, Berkeley, study finds that bats' fierce immune response to viruses could drive viruses to replicate faster, so that when they jump to mammals with average immune systems, such as humans, the viruses wreak deadly havoc.

Some bats—including those known to be the original source of human infections—have been shown to host immune systems that are perpetually primed to mount defenses against viruses. Viral infection in these bats leads to a swift response that walls the virus out of cells. While this may protect the bats from getting infected with high viral loads, it encourages these viruses to reproduce more quickly within a host before a defense can be mounted.

This makes bats a unique reservoir of rapidly reproducing and highly transmissible viruses. While the bats can tolerate viruses like these, when these bat viruses then move into animals that lack a fast-response immune system, the viruses quickly overwhelm their new hosts, leading to high fatality rates.

"Some bats are able to mount this robust antiviral response, but also balance it with an anti-inflammation response," said Cara Brook, a postdoctoral Miller Fellow at UC Berkeley and the first author of the study. "Our immune system would generate widespread inflammation if attempting this same antiviral strategy. But bats appear uniquely suited to avoiding the threat of immunopathology."

The researchers note that disrupting bat habitat appears to stress the animals and makes them shed even more virus in their saliva, urine and feces that can infect other animals.

Related Article: Portable Lab You Plug into Your Phone Can Diagnose Illnesses like Coronavirus

"Heightened environmental threats to bats may add to the threat of zoonosis," said Brook, who works with a bat monitoring program funded by DARPA (the US Defense Advanced Research Projects Agency) that is currently underway in Madagascar, Bangladesh, Ghana, and Australia. The project, Bat One Health, explores the link between loss of bat habitat and the spillover of bat viruses into other animals and humans.

"The bottom line is that bats are potentially special when it comes to hosting viruses," said Mike Boots, a disease ecologist and UC Berkeley professor of integrative biology. "It is not random that a lot of these viruses are coming from bats. Bats are not even that closely related to us, so we would not expect them to host many human viruses. But this work demonstrates how bat immune systems could drive the virulence that overcomes this."

The new study by Brook, Boots and their colleagues was published this month in the journal eLife.

Boots and UC Berkeley colleague Wayne Getz are among 23 Chinese and American co-authors of a paper published last week in the journal EcoHealth that argues for better collaboration between US and Chinese scientists who are focused on disease ecology and emerging infections.

As the only flying mammal, bats elevate their metabolic rates in flight to a level that doubles that achieved by similarly sized rodents when running.

Generally, vigorous physical activity and high metabolic rates lead to higher tissue damage due to an accumulation of reactive molecules, primarily free radicals. But to enable flight, bats seem to have developed physiological mechanisms to efficiently mop up these destructive molecules. 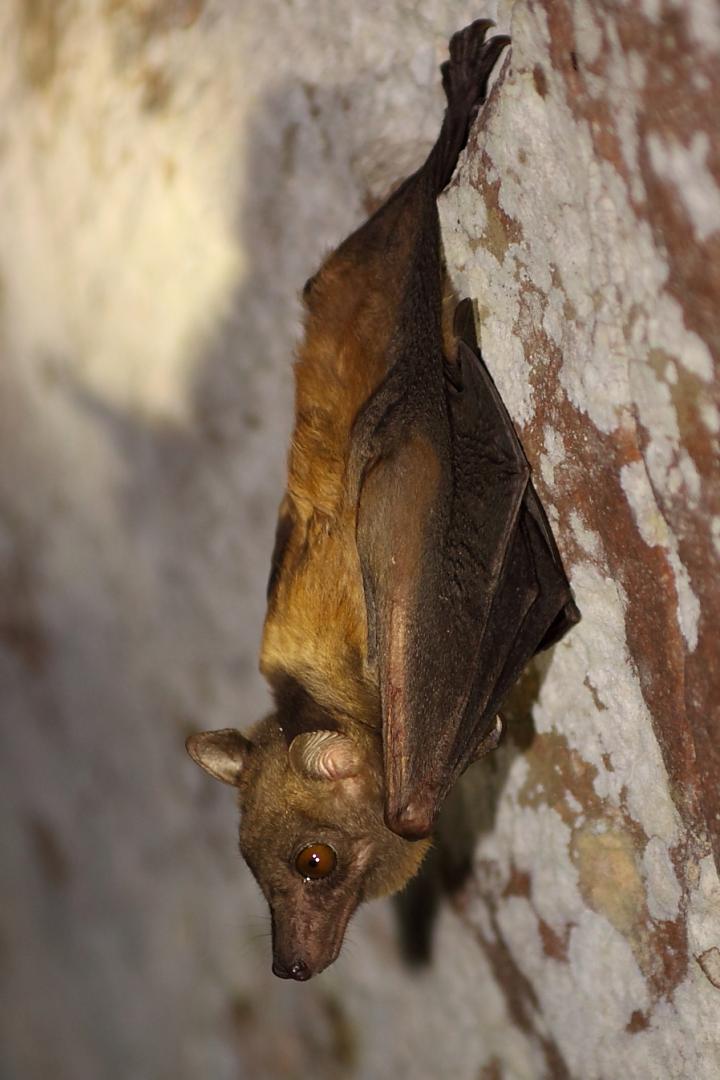 The Egyptian fruit bat, Rousettus aegyptiacus, is a host to the Marburg virus, which can infect monkeys and cross over into humans to cause a deadly hemorrhagic fever.
Photo courtesy of Victor Corman

This has the side benefit of efficiently mopping up damaging molecules produced by inflammation of any cause, which may explain bats' uniquely long lifespans. Smaller animals with faster heart rates and metabolism typically have shorter lifespans than larger animals with slower heartbeats and slower metabolism, presumably because high metabolism leads to more destructive free radicals. But bats are unique in having far longer lifespans than other mammals of the same size: Some bats can live 40 years, whereas a rodent of the same size may live two years.

This rapid tamping down of inflammation may also have another perk: tamping down inflammation related to antiviral immune response. One key trick of many bats' immune systems is the hair-trigger release of a signaling molecule called interferon-alpha, which tells other cells to "man the battle stations" before a virus invades.

Brook was curious how bats' rapid immune response affects the evolution of the viruses they host, so she conducted experiments on cultured cells from two bats and, as a control, one monkey. One bat, the Egyptian fruit bat (Rousettus aegyptiacus), a natural host of Marburg virus, requires a direct viral attack before transcribing its interferon-alpha gene to flood the body with interferon. This technique is slightly slower than that of the Australian black flying fox (Pteropus alecto), a reservoir of Hendra virus, which is primed to fight virus infections with interferon-alpha RNA that is transcribed and ready to turn into protein. The African green monkey (Vero) cell line does not produce interferon at all.

When challenged by viruses mimicking Ebola and Marburg, the different responses of these cell lines were striking. While the green monkey cell line was rapidly overwhelmed and killed by the viruses, a subset of the rousette bat cells successfully walled themselves off from viral infection, thanks to interferon early warning.

In the Australian black flying fox cells, the immune response was even more successful, with the viral infection slowed substantially over that in the rousette cell line. In addition, these bat interferon responses seemed to allow the infections to last longer.

"Think of viruses on a cell monolayer like a fire burning through a forest. Some of the communities—cells—have emergency blankets, and the fire washes through without harming them, but at the end of the day you still have smoldering coals in the system—there are still some viral cells," Brook said. The surviving communities of cells can reproduce, providing new targets for the the virus and setting up a smoldering infection that persists across the bat's lifespan.

Brook and Boots created a simple model of the bats' immune systems to recreate their experiments in a computer.

"This suggests that having a really robust interferon system would help these viruses persist within the host," Brook said. "When you have a higher immune response, you get these cells that are protected from infection, so the virus can actually ramp up its replication rate without causing damage to its host. But when it spills over into something like a human, we don't have those same sorts of antiviral mechanism, and we could experience a lot of pathology."

The researchers noted that many of the bat viruses jump to humans through an animal intermediary. SARS got to humans through the Asian palm civet; MERS via camels; Ebola via gorillas and chimpanzees; Nipah via pigs; Hendra via horses, and Marburg through African green monkeys. Nonetheless, these viruses still remain extremely virulent and deadly upon making the final jump into humans.

Brook and Boots are designing a more formal model of disease evolution within bats in order to better understand virus spillover into other animals and humans.

"It is really important to understand the trajectory of an infection in order to be able to predict emergence and spread and transmission," Brook said.

- This press release was originally published on the UC Berkeley website