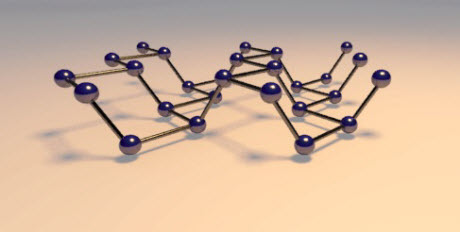 Phosphorene has sparked growing interest because it overcomes many of the challenges of using graphene in electronics.Image courtesy of McGill UniversityAs scientists continue to hunt for a material that will make it possible to pack more transistors on a chip, new research from McGill University and Université de Montréal adds to evidence that black phosphorus could emerge as a strong candidate.

In a study published today in Nature Communications, the researchers report that when electrons move in a phosphorus transistor, they do so only in two dimensions. The finding suggests that black phosphorus could help engineers surmount one of the big challenges for future electronics: designing energy-efficient transistors.

“Transistors work more efficiently when they are thin, with electrons moving in only two dimensions,” says Thomas Szkopek, an associate professor in McGill’s Department of Electrical and Computer Engineering and senior author of the new study. “Nothing gets thinner than a single layer of atoms.”

In 2004, physicists at the University of Manchester in the U.K. first isolated and explored the remarkable properties of graphene -- a one-atom-thick layer of carbon. Since then scientists have rushed to  investigate a range of other two-dimensional materials. One of those is black phosphorus, a form of phosphorus that is similar to graphite and can be separated easily into single atomic layers, known as phosphorene.

Phosphorene has sparked growing interest because it overcomes many of the challenges of using graphene in electronics. Unlike graphene, which acts like a metal, black phosphorus is a natural semiconductor:  it can be readily switched on and off.

“To lower the operating voltage of transistors, and thereby reduce the heat they generate, we have to get closer and closer to designing the transistor at the atomic level,” Szkopek says. “The toolbox of the future for transistor designers will require a variety of atomic-layered materials: an ideal semiconductor, an ideal metal, and an ideal dielectric. All three components must be optimized for a well-designed transistor.  Black phosphorus fills the semiconducting-material role.”

To examine how the electrons move in a phosphorus transistor, the researchers observed them under the influence of a magnetic field in experiments performed at the National High Magnetic Field Laboratory in Tallahassee, FL, the largest and highest-powered magnet laboratory in the world.  This research “provides important insights into the fundamental physics that dictate the behavior of black phosphorus,” says Tim Murphy, DC Field Facility Director at the Florida facility.

“What’s surprising in these results is that the electrons are able to be pulled into a sheet of charge which is two-dimensional, even though they occupy a volume that is several atomic layers in thickness,” Szkopek says. That finding is significant because it could potentially facilitate manufacturing the material -- though at this point “no one knows how to manufacture this material on a large scale.”

“There is a great emerging interest around the world in black phosphorus,” Szkopek says. “We are still a long way from seeing atomic layer transistors in a commercial product, but we have now moved one step closer.”

This work was funded by the Natural Sciences and Engineering Research Council of Canada, the Canadian Institute for Advanced Research, the Fonds de recherche du Québec – Nature et technologies, Le regroupement québécois sur les matériaux de pointe, and the Canada Research Chairs program.  A portion of the work was performed at the National High Magnetic Field Laboratory, which is supported by the National Science Foundation, the State of Florida and the U.S. Department of Energy.