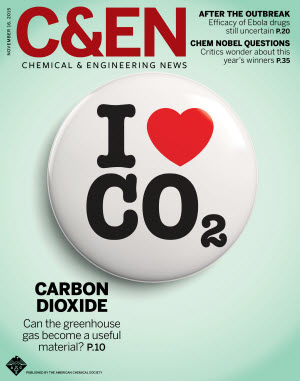 Image courtesy of the American Chemical SocietyThe world has a carbon dioxide problem, and to fix it, much attention has been paid to renewable energy sources, which don't emit the greenhouse gas. But what if we could turn waste CO2 into marketable chemicals and fuels before it escaped to the atmosphere? Would this help alter the climate change narrative? The cover story in Chemical & Engineering News (C&EN), the weekly newsmagazine of the American Chemical Society, parses this possibility.

Alex Scott, a senior editor at C&EN, reports that the answers to these questions are not yet clear cut. A handful of companies around the world are trying to capitalize on our combined need to reduce CO2 and our demand for chemicals and fuels. But the practice of carbon capture and usage, or CCU, still faces many challenges. The processes developed so far to accomplish CCU are costly and require large amounts of energy. As such, most resulting products are exorbitantly expensive. For example, methanol from CO2 costs almost three times more than if it were made from natural gas.

Related article: Can We Turn Unwanted Carbon Dioxide Into Electricty?

But proponents are optimistic that following climate talks in Paris this December, new regulations will put restrictions on carbon emissions that will be tight enough to make CCU profitable. Whether it will impact climate change, however, is another matter. Even if the chemical industry were based on CO2 rather than fossil fuels, it would only consume 300 million metric tons of the gas while coal-fired power plants alone produce more than 14 billion metric tons of it each year.