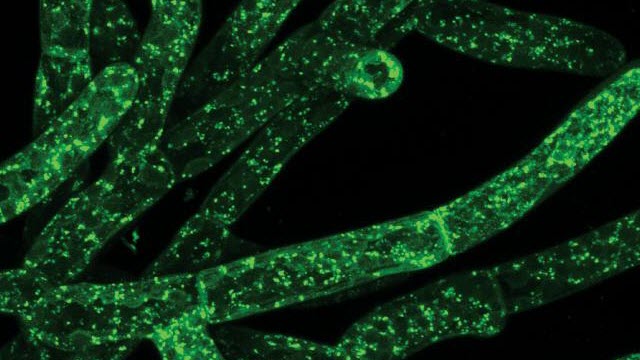 Moss cells showing the location of the protein that makes the new polysaccharide, arabinoglucan.Image credit: University of Rhode Island

An international team of scientists including the University of Adelaide has discovered a new complex carbohydrate in moss that could possibly be exploited for health or other uses.

The scientists, from Australia’s ARC Centre of Excellence in Plant Cell Walls and University of Rhode Island, in the US, say the polysaccharide looks a bit like the gut-friendly, health-promoting beta glucan found in oats and other cereals. A polysaccharide is a complex carbohydrate made up of sugar molecules.

Led by professor Rachel Burton, in the University of Adelaide’s School of Agriculture, Food and Wine, and professor Alison Roberts, University of Rhode Island, the research team was looking into the evolutionary history of the beta glucan when they made this discovery. The research has been published in The Plant Cell.

Beta glucan, another polysaccharide, is a dietary fiber that is known to have many health benefits. It is abundant in cereals such as oats and barley, but has not been found in moss despite the plants having similar relevant genes.

The researchers took one of these similar genes from moss to see if it would lead to the production of beta glucan.

“What we found was a new polysaccharide made up of the sugars glucose and arabinose—not just glucose as in beta glucan,” says Burton.

“We have called it arabinoglucan and believe the way the two different sugars link together will make it structurally similar to beta glucan. We are not advocating eating moss, we are simply saying that there is great potential for this new polysaccharide as we’ve seen with others.”

Burton says that while the function of the arabinoglucan is not yet known, it may have properties that can be exploited for health, industrial, and medical fields, like well-known polysaccharides, such as cellulose for paper and cotton, or xylans that can be used for as dietary supplements or drug delivery.

“This discovery leads to the question: how many other polysaccharides do plants contain that we don’t yet know about?” Burton says.

“We don’t know what’s there because we can’t always see it. Scientists will need new tools to be able to find them, which might include new antibodies and microscopy techniques.”

The research undertaken at the University of Adelaide and University of Melbourne was supported by the Australian Research Council, through the ARC Centre of Excellence in Plant Cell Walls, and also the National Science Foundation, US.