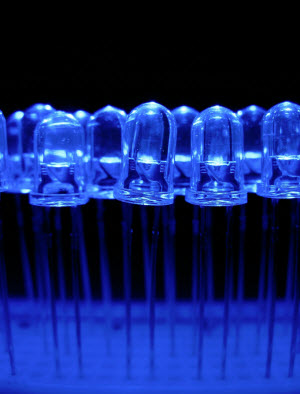 An NUS study has shown the potential of blue LEDs as a novel chemical-free food preservation technology.Photo credit: Gussisaurio, Wikimedia CommonsA team of scientists from the National University of Singapore (NUS) has found that blue light emitting diodes (LEDs) have a strong antibacterial effect on major foodborne pathogens, and are most effective when in cold temperatures (between 4°C and 15°C) and mildly acidic conditions of around pH 4.5.

This opens up novel possibilities of using blue LEDs as a chemical-free food preservation method. Acidic foods such as fresh-cut fruits and ready-to-eat meat can be preserved under blue LEDs in combination with chilling temperatures without requiring further chemical treatments that are commonly needed for food preservation.

These findings were recently published in the Food Microbiology journal in June 2015.

While LEDs are most commonly known as an energy-saving light source, they have also been known to have an antibacterial effect. Bacterial cells contain light sensitive compounds that adsorb light in the visible region of the electromagnetic spectrum (400-430 nm), which is mainly blue LED light. Exposure to illumination from blue LED light can hence start off a process within the cells that ultimately causes the cells to die.

Existing studies on the antibacterial effect of LED illumination mostly evaluated its efficacy by adding photosensitisers to the food samples, or by using very close distance of less than 2 cm between the bacterial suspension and LED light source. These conditions would not be viable for application on food preservation.

The NUS team, led by Assistant Professor Yuk Hyun-Gyun, from the Food Science and Technology Programme at the NUS Faculty of Science, is the first so far to show that factors such as temperature and pH levels, which are typically related to food products, can affect the antibacterial effect of LEDs.

A previous study in 2013 by the same team had also looked at the effect of temperature on blue LED’s ability to deactivate bacterial cells and found the antibacterial effect to be most enhanced in chilling temperatures.

Asst Prof Yuk said, “Taken together, our two studies point to a potential for preserving acidic foods in combination with chilling temperatures without chemical treatments. This could meet the increasing demand for natural or minimally-processed foods without relying on chemicals such as acidulants and artificial preservatives to preserve food products.”

The team’s findings can potentially be applied to food chillers or cold supply chain to preserve fresh-cut fruits, ready-to-eat seafood such as sushi and smoked salmon, as well as chilled meat products. This technology can also be useful for retail settings, spanning hawker centres, food courts to supermarkets, as well as for food suppliers.

“The next step for us is to apply this LED technology to real food samples such as fresh-cut fruits, as well as ready-to-eat or raw sea foods and meats products, to investigate whether LED illumination can effectively kill pathogenic bacteria without deterioration of food products,” said Asst Prof Yuk.

Collaborating with the Agri-Food & Veterinary Authority

“Since November 2012, we have also been collaborating with the Agri-Food & Veterinary Authority (AVA) to apply this LED technology to fresh-cut vegetables to determine whether LED will help preserve or improve the nutritional quality of vegetables during storage,” said Asst Prof Yuk.

As part of this three-year study, AVA has been studying the effects of LED on some key quality parameters of vegetables (e.g. vitamin C, chlorophyll and beta-carotene) to investigate if the quality of the vegetables under this LED treatment will be maintained. The results will be available once the study is complete.