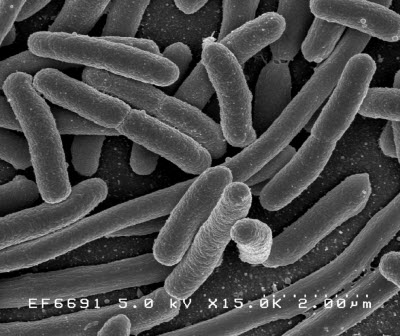 Escherichia coli, one of the many species of bacteria present in the human gut.Rocky Mountain Laboratories, NIAID, NIH, Wikimedia CommonsThe trillions of microbes that inhabit the human body, collectively called the microbiome, are estimated to weigh two to six pounds—up to twice the weight of the average human brain. Most of them live in the gut and intestines, where they help us to digest food, synthesize vitamins and ward off infection. But recent research on the microbiome has shown that its influence extends far beyond the gut, all the way to the brain.

Over the past 10 years, studies have linked the gut microbiome to a range of complex behaviors, such as mood and emotion, and appetite and satiety. Not only does the gut microbiome appear to help maintain brain function but it may also influence the risk of psychiatric and neurological disorders, including anxiety, depression and autism.

Three researchers at the forefront of this emerging field recently discussed the microbiome-brain connection with The Kavli Foundation.

“The big question right now is how the microbiome exerts its effects on the brain,” said Christopher Lowry, Associate Professor of Integrative Physiology at the University of Colorado, Boulder. Lowry is studying whether beneficial microbes can be used to treat or prevent stress-related psychiatric conditions, including anxiety and depression.

One surprising way in which the microbiome influences the brain is during development. Tracy Bale, Professor of Neuroscience at the School of Veterinary Medicine at the University of Pennsylvania, and her team have found that the microbiome in mice is sensitive to stress and that stress-induced changes to a mother’s microbiome are passed on to her baby and alter the way her baby’s brain develops.

“There are key developmental windows when the brain is more vulnerable because it’s setting itself up to respond to the world around it,” said Bale, who has done pioneering research into the effects of maternal stress on the brain. “So, if mom’s microbial ecosystem changes—due to infection, stress or diet, for example—her newborn’s gut microbiome will change too, and that can have a lifetime effect.”

Sarkis Mazmanian, Louis & Nelly Soux Professor of Microbiology at the California Institute of Technology, is exploring the link between gut bacteria, gastrointestinal disease and autism, a neurodevelopmental disorder. He has discovered that the gut microbiome communicates with the brain via molecules that are produced by gut bacteria and then enter the bloodstream. These metabolites are powerful enough to change the behavior of mice.

“We’ve shown, for example, that a metabolite produced by gut bacteria is sufficient to cause behavioral abnormalities associated with autism and with anxiety when it is injected into otherwise healthy mice,” said Mazmanian.

The work of these three researchers raises the possibility that brain disorders, including anxiety, depression and autism, may be treated through the gut, which is a much easier target for drug delivery than the brain. But there is still much more research to be done to understand the gut-microbiome-brain connection, they said.

Mazmanian’s lab is also exploring whether the microbiome plays a role in neurodegenerative diseases such as Alzheimer’s and Parkinson’s.

“There are flash bulbs going off in the dark, suggesting that very complex neurodegenerative disorders may be linked to the microbiome. But once again this is very speculative. These seminal findings, the flash bulbs, are only just beginning to illuminate our vision of the gut-microbiome-brain connection,” said Mazmanian.