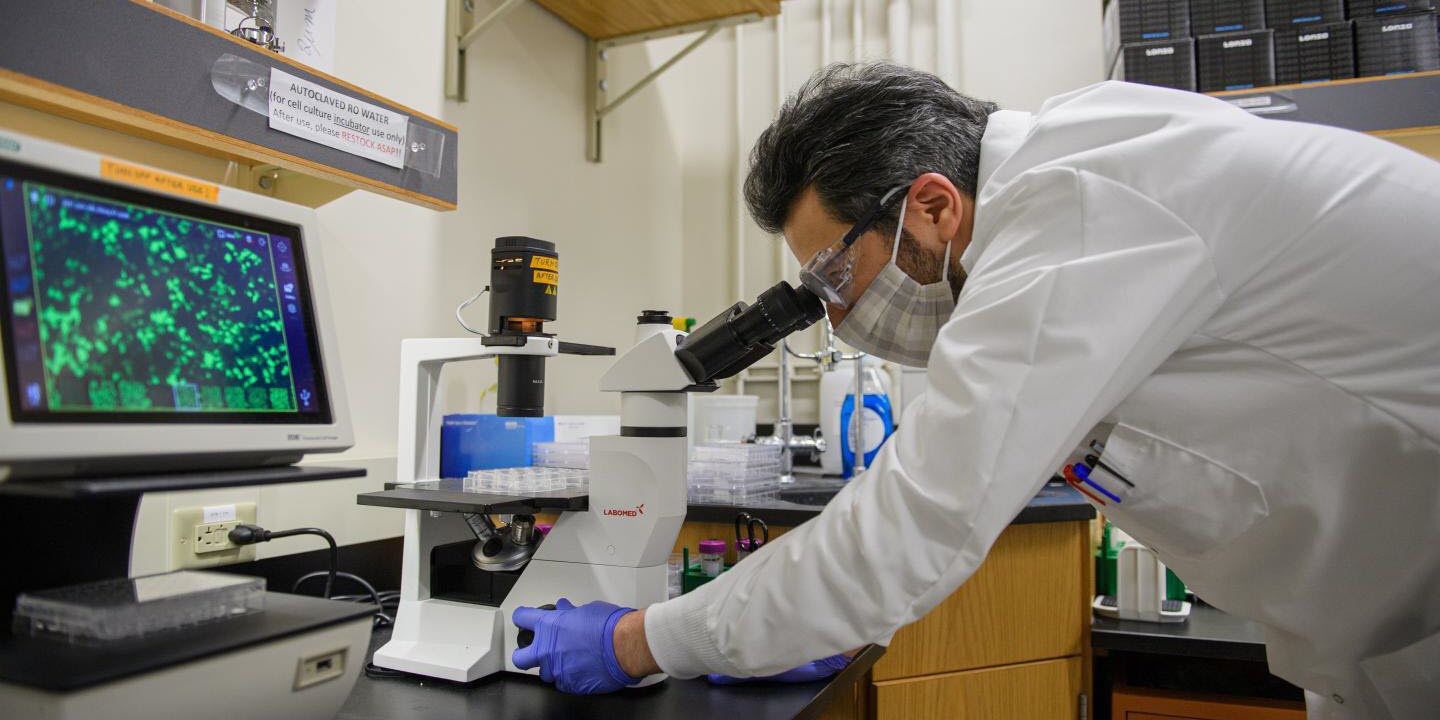 Scientists have discovered a surprising response in lung cells infected with the SARS-CoV-2 virus, which might explain why the disease is so difficult to treat. "This was completely unexpected," says Purdue scientist Majid Kazemian, who led the research. The researchers suggest testing a new pairing of drugs to combat the disease.
Purdue University photo/ Rebecca McElhoe

WEST LAFAYETTE, IN — New insights into the immune response to SARS-CoV-2 infections could bring better treatments for COVID-19 cases.

An international team of researchers unexpectedly found that a biochemical pathway, known as the immune complement system, is triggered in lung cells by the virus, which might explain why the disease is so difficult to treat. The research was published this week in the journal Science Immunology.

The researchers propose that the pairing of antiviral drugs with drugs that inhibit this process may be more effective. Using an in vitro model using human lung cells, they found that the antiviral drug Remdesivir, in combination with the drug Ruxolitinib, inhibited this complement response.

This is despite recent evidence that trials of using Ruxolitinib alone to treat COVID-19 have not been promising.

"We looked at the genes that are up-regulated by COVID-19 but down-regulated by specific drugs, and Ruxolitinib was the top drug with that property," he said.

Within the last few years, scientists have discovered that the immune complement system—a complex system of small proteins produced by the liver that aids, or complements, the body's antibodies in the fight against blood-borne pathogens—can work inside cells and not just in the bloodstream.

Surprisingly, the study found that this response is triggered in cells of the small structures in the lungs known as alveoli, Kazemian said.

"We observed that SARS-CoV2 infection of these lung cells causes expression of an activated complement system in an unprecedented way," Kazemian said. "This was completely unexpected to us because we were not thinking about activation of this system inside the cells, or at least not lung cells. We typically think of the complement source as the liver."

Claudia Kemper, senior investigator and chief of the Complement and Inflammation Research Section of the National Institutes of Health, was among the first to characterize novel roles of the complement system in the immune system. She agreed these latest findings are surprising.

"The complement system is traditionally considered a liver-derived and blood-circulating sentinel system that protects the host against infections by bacteria, fungi, and viruses," she said. "It is unexpected that in the setting of a SARS-CoV2 infection, this system rather turns against the host and contributes to the detrimental tissue inflammation observed in severe COVID-19. We need to think about modulation of this intracellular, local, complement when combating COVID-19."

"These findings provide important evidence showing not only that complement-related genes are amongst the most significant pathways induced by SARS-CoV2 in infected cells, but also that activation of complement occurs inside of lung epithelial cells, i.e., locally where infection is present," he said.

"This may explain why targeting the complement system outside of cells and in the circulation has, in general, been disappointing in COVID-19. We should probably consider using inhibitors of complement gene transcription or complement protein activation that are cell permeable and act intracellularly instead."

Afzali cautions that appropriate clinical trials should be conducted to establish whether a combination treatment provides a survival benefit.

"The second finding that I think is important is that the data suggest potential benefit for patients with severe COVID-19 from combinatorial use of an antiviral agent together with an agent that broadly targets complement production or activation within infected cells," he said. "These data are promising, but it is important to acknowledge that we carried out the drug treatment experiments in cell lines infected with SARS-CoV2. So, in and of themselves they should not be used to direct treatment of patients."

"A currently unexplored and possibly therapeutically interesting aspect of our observations is also whether the virus utilizes local complement generation and activation to its benefit, for example, for the processes underlying cell infection and replication," she said.

- This press release was originally published on the Purdue University News website. It has been edited for style