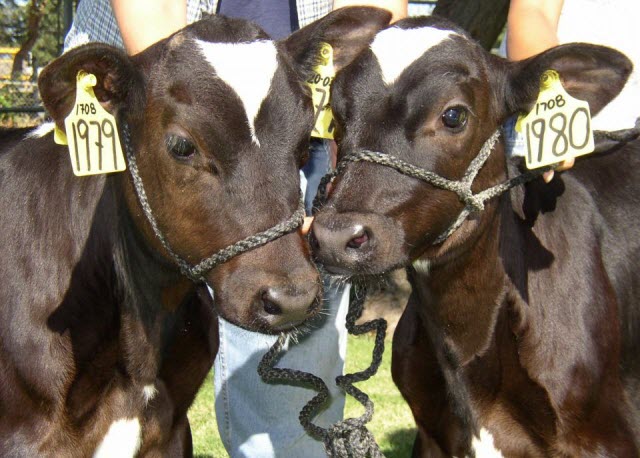 It has been 20 years since Dolly the sheep was successfully cloned in Scotland, but cloning mammals remains a challenge. A new study by researchers from the U.S. and France of gene expression in developing clones now shows why most cloned embryos likely fail.

Dolly was cloned using the technique of “somatic cell nuclear transfer,” when a nucleus from an adult cell is transferred into an unfertilized egg that has had its nucleus removed, and is then shocked with electricity to start cell growth. Embryos are then transferred to recipient mothers who carry the clones to birth.

Cloning cattle is an agriculturally important technology and can be used to study mammalian development, but the success rate remains low, with typically fewer than ten percent of the cloned animals surviving to birth. The majority of losses are due to embryonic death, a failure during the implantation process, or the development of a defective placenta.

In a study published Dec. 8 in the journal Proceedings of the National Academy of Sciences, Harris Lewin, professor in the University of California, Davis, Department of Evolution and Ecology, and colleagues in France and the U.S. used RNA sequencing to look at gene expression in cloned cows during implantation in order to get a better understanding of the molecular mechanisms that lead to a high rate of pregnancy failure for clones. The study is the culmination of 12 years of collaboration and combines the French team’s expertise in cloning and reproductive biology with the U.S. team’s expertise in functional genomics. 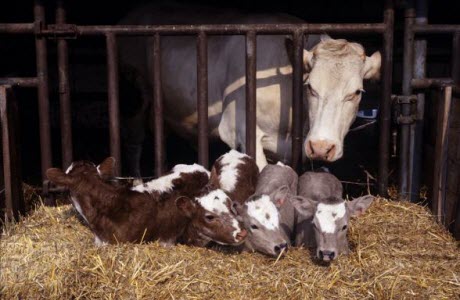 The first cloned calves born in the Biology of Development and Reproduction Unit in Jouy-en-Josas, France.Photo Credit: Gérard Paillard/INRA

“Our work tackled fundamental questions relating to the cloning process,” said Lewin. “The study has resulted in the redefinition of our understanding of how nuclear reprogramming affects gene expression in extraembryonic tissues of cloned cattle embryos, and the exquisite communication between clones and their recipient mothers.”

“The large amount of data our collaboration has generated sheds light on mechanisms that account for embryonic losses at implantation,” said Olivier Sandra, team leader for the study at the Institut National de la Recherche Agronomique in France. “They also provide new insights on how events taking place at implantation drive the progression of pregnancy and shape the post-natal phenotype of the progeny, in cattle as well as in other mammalian species.”

The researchers studied tissue from cloned cow embryos—all derived from the same cell line—at 18 and 34 days of development, as well as the corresponding endometrial lining of the pregnant cows. They also looked at noncloned cows conceived using artificial insemination.

When they compared the results to the Mouse Genomic Informatics Knockout database they found 123 genes that corresponded with functional annotation of abnormal extraembryonic tissue morphology, 121 associated with embryonic lethality, and 14 with abnormal embryo implantation.

By day 34 of development, however, the pattern of gene expression was much more similar to control cows derived from artificial insemination, suggesting that these surviving clones were able to implant in the uterus and begin to form a placenta. These results indicate that the large losses of cloned cows before implantation probably result from problems with critical developmental genes in the extraembryonic tissue.

The study also revealed other points of potential failure for the clones, including problems with hormonal signaling between the developing cloned embryo and the pregnant cow. For example, the study found down-regulation of genes involved in interferon tau, the major signal of pregnancy recognition. The clones also appeared to have an effect on the gene expression of the pregnant cows themselves; on day 34, some uterus tissue showed grossly different gene expression, which could affect the placenta.

“Our data confirm that the interactions between the uterus and the extraembryonic tissues is critical during implantation, making this step a major hurdle for the progression of pregnancy,” said Sandra.

Related Article: Do You Speak Cow?

“We now understand why clones fail, which can lead to improvements in the process of cloning of animals,” said Lewin. But, he cautioned, “Our discoveries also reinforce the need for a strict ban on human cloning for any purposes.”

“It’s amazing that the process works at all, demonstrating the great plasticity that developing animals have to adapt to extreme conditions,” Lewin said.

The research was supported by a U.S. Department of Agriculture–Agricultural Research Service Grant, a European Program SABRE Grant, and French National Research Agency Grants. The pregnancies were initiated at the experimental farm of the Institut National de la Recherche Agronomique in France and at the University of Illinois at Urbana–Champaign. The experiment was conducted in accordance with the rules and regulations of the European Convention on Animal Experimentation.