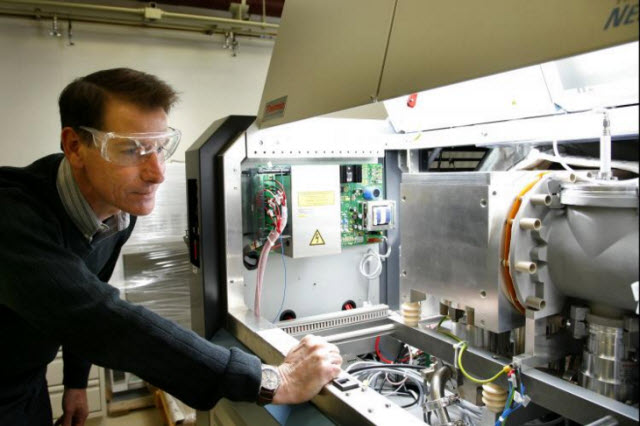 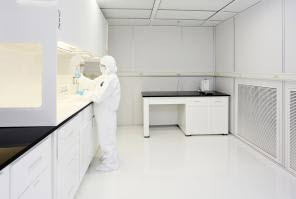 “A very big capability at Oak Ridge exists fornuclear analytics, all the way from helping commercial production of nuclear power to making sure the world’s nuclear materials are properly accounted for,” said ORNL’s Joseph Giaquinto, leader of the Nuclear Analytical Chemistry and Isotopics Laboratories, or NACIL. “My group is a specialized analytical group. We focus in the nuclear arena, from nuclear fuels R&D to nuclear forensics and safeguarding nonproliferation.”

From the Manhattan Project in the 1940s to the High Flux Isotope Reactor’s 50th anniversary and its selection as an American Nuclear Society Nuclear Historic Landmark, ORNL has been the preeminent destination for nuclear R&D.

For instance, within the NACIL group are the analytical laboratories which were the first to be approved for as a network analytical laboratory for the United Nation’s International Atomic Energy Agency (IAEA), assisting the “Atoms for Peace” organization’s goal of safeguarding nuclear nonproliferation with global tests to detect illicit uranium enrichment activity.

In 2011 ORNL invested in its nuclear analytical chemistry group, converting the Mouse House, an underused facility that once held the national lab’s groundbreaking genetics program, into the state-of-the-art Ultra-Trace Forensics Science Facility. Over the last two years the U.S. Department of State provided NACIL investments totaling more than $1.5 million to replace aging mass spectrometers with state-of-the-art instruments with capabilities unmatched in sensitivity and precision. Under Giaquinto’s six-year leadership, the group’s funding for nuclear forensics work has skyrocketed, increasing nearly 10-fold over previous years.

With growing project requests coming from myriad sources like the State Department, the U.S. Department of Homeland Security, NASA and IAEA, the ORNL scientists are applying seventy-plus years of nuclear know-how to tackle some of the world’s most pressing nuclear security problems.

NACIL scientists have examined numerous nuclear “crime scenes.” They unraveled the mysteries behind President John F. Kennedy’s assassination and President Zachary Taylor’s sudden death using mere hair strands, fingernail shards, and bullet fragments. They analyzed ratios of elements in mixed-oxide fuel for the U.S. Nuclear Regulatory Commission, profiling the alternative fuel source’s safety and effectiveness. And they reached even higher, helping in the development of a production process to create the source materials for NASA’s deep-space battery for the next era of interplanetary exploration.

NACIL’s twenty-plus researchers collaborate from several sites throughout the national laboratory’s campus. The team’s ingenuity and experience are invoked on a variety of global projects, such as teaching analytical practices at international Centers of Excellence for safeguards and, in the case of NACIL’s Rob Smith, co-patenting a chemical detector that can “sniff out” secret graves.

The team often works with radioactive materials, assisting in development of methods for extracting high-purity isotopes for medical use and performing detailed chemical extractions and isolations. Measurements like these enable improved simulations for irradiation of the material, providing a radiochemical template for better understanding nuclear materials.

Examinations to find remnants of trace-level radioactive material are a cornerstone of NACIL efforts. A large portion of the group’s trace-level forensic work began as a pilot project two years ago—and was so successful that the program is now an ORNL mainstay. The development of rapid techniques for separating elements and their isotopes and methods for detecting trace “fingerprints” in nuclear materials now benefit their multiple national sponsors in the arena of nuclear forensics. 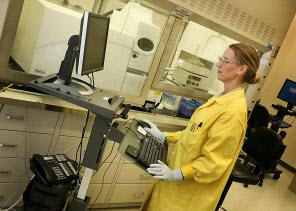 Experimentalists like Oak Ridge National Laboratory’s Tamara Jo Keever work with computational scientists and nuclear physicists to answer nagging nuclear questions.Image credit - Oak Ridge National Laboratory, U.S. Dept. of Energy; photographer Jason Richards.To assure smear kits are not contaminated prior to sample collection, chemists screen them in HFIR’s irradiation facilities before the kits are deployed in the field. The IAEA, the world’s nuclear watchdog, can then use the approved kits to swipe nuclear facilities to detect if a nation has broken promises to abate enrichment and violated nonproliferation agreements.

But it is neutron activation analysis, or NAA, that gives this team its unique capabilities. Access to the world’s highest continuous thermal neutron flux enables the lowest detection limits for uranium and plutonium of any global NAA facility. ORNL scientists use it to characterize nuclear materials by scrutinizing their ratio of major, minor and trace chemical elements.

Researchers bombard an unknown sample (say, a swipe from an IAEA test) with neutrons from HFIR until a gamma ray is released, creating a unique and detectable “fingerprint” of the sample’s fissile material. Matching the evidence to established reference standards identifies the sample’s contents.

Currently ORNL’s David Glasgow is developing a method to further improve the fingerprint of nuclear isotopes. “The Neutron Activation Analysis Lab [located at HFIR] provides high-fidelity irradiated nuclear forensics materials to the research community,” Glasgow said. “In addition, we use specialized nuclear methods that yield bulk and isotopic data of fissile traces to analyze materials of interest to the nuclear forensics and nonproliferation missions.”

With the advent of the Ultra-Trace Forensics Science Facility and a multi-sponsored mass spectrometry center at ORNL—complete with strict cleanrooms, a small energy footprint, new protective glove boxes and a walk-in hood for forensic analysis—there is undeniable potential for a NACIL future that honors its past.